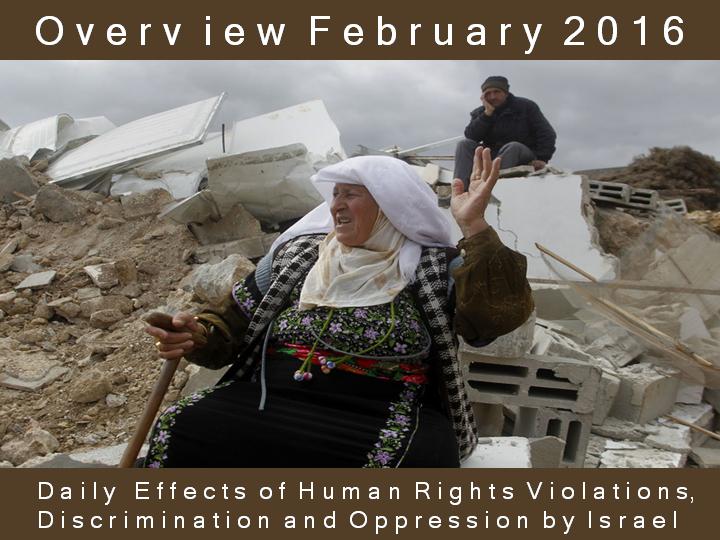 In the month of February 2016 Staat van Beleg could list 531 human rights violations (and 140 reports/analyses). Last month we could clearly see an increase in the number of home demolitions. In February this trend developed further so we will provide you with some facts and numbers.

According to the UN 400 Palestinians in the occupied West Bank have been displaced due to Israeli demolitions during the first six weeks of this year.

The number of Palestinians displaced in 2016 is already equivalent to over half of the total number displaced in all of 2015. Most of the demolitions in the West Bank take place on the spurious legal grounds that Palestinians do not possess building permits, but, in Area C, official Israeli figures indicate only 1.5 percent of Palestinian permit applications are approved in any case.

The UN documented 283 homes and other structures destroyed, dismantled, or confiscated between Jan. 1 and Feb. 15, many of which were located in the Jordan Valley. The measures displaced 404 Palestinians, including 219 children. Another 1,150 Palestinians were also affected after losing structures related to their source of income, according to the UN.
(Source: http://www.maannews.com/Content.aspx?id=770350) 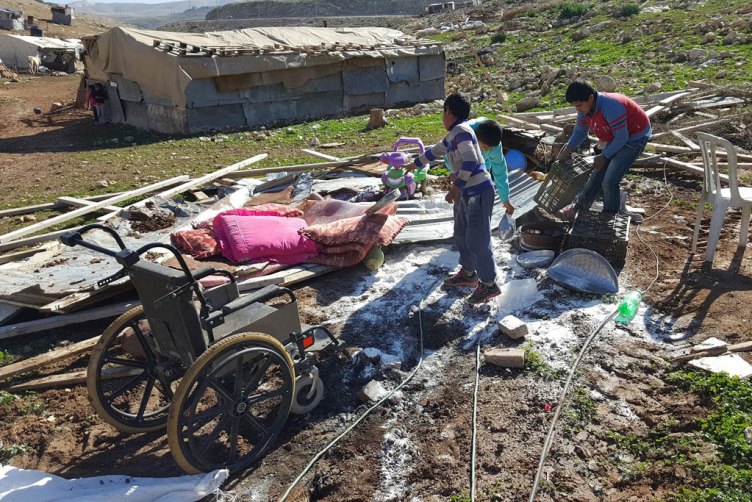 According to Palestinian statistics Israel had demolished last year 645 houses and structures, which displaced and affected the lives of 2,180 individuals, including 1,108 children.
(Source: http://english.palinfo.com/site/pages/details.aspx?itemid=76726)

According to an analysis of the Israeli Committee Against House Demolitions (ICAHD) since 1967 Israel has demolished more than 28,000 Palestinian homes, business, livestock facilities and other structures vital to Palestinian life and livelihood in the Occupied Palestinian Territory. The motivation for demolishing these homes is purely political, and racially informed: to either drive the Palestinians out of the country altogether (the “quiet transfer”) or to confine the four million residents of the West Bank, East Jerusalem and Gaza to small, crowded, impoverished and disconnected enclaves.
(Source: http://icahd.org/get-the-facts/analysis/)