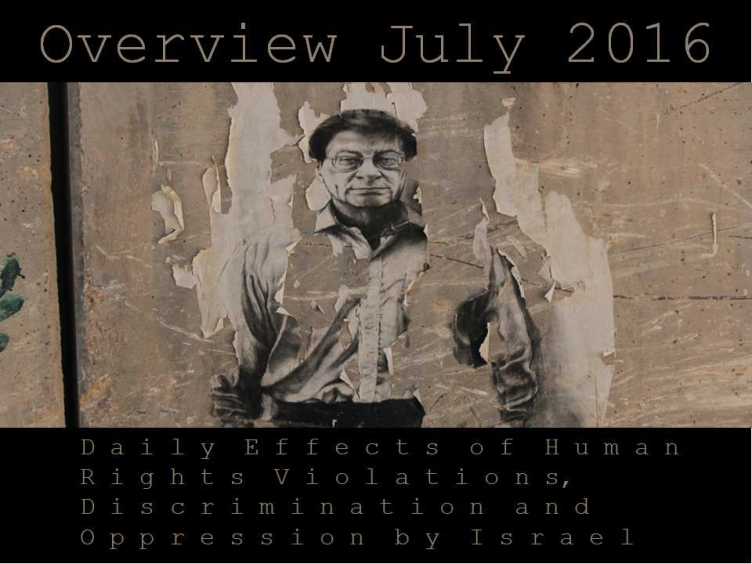 In the month of July 2016  Staat van Beleg could list 607 human rights violations (and 115 reports/analyses).

Every month we are trying to highlight another aspect of the occupation of Palestine. What caught our attention were some cultural issues including Israeli violations on writers/poets, a film director, a circus trainer, an astrophysicist, peace activists and a photo journalist. We will show you eleven examples of how Israel is halting cultural and journalistic freedoms.

1. Two Israeli ministers, Miri Regev and Avigdor Lieberman,  in their continued attempts to discredit and demonize the Palestinian people, calling the work of the great late Palestinian poet Mahmoud Darwish incitement and comparing him to no less than Hitler.

2. On the 8th of July we have been witnessing the anniversary of the murder on late writer and leading member of the Popular Front for the Liberation of Palestine, Ghassan Kanafani.

3. Dareen Tatour, a Palestinian citizen of Israel, was imprisoned for three months followed by over six months of house arrest over “incitement” allegations based on her poetry, posted online in a YouTube video and shared on Facebook. This week she was shortly detained and now they have put her back under house arrest.

4. Mohammed Abu Sakha a circus trainer who has been held in a prison cell for the last six months, without being formally charged. And despite worldwide protests and promises that he would soon be released, the Israeli military renewed his detention for another six months.

5. Emad Burnat, the Oscar-nominated director of the documentary film “5 Broken Cameras, was arrested during a protest in Bi’lin.

6. Acclaimed Palestinian photo-journalist, Hamde Abu Rahma has been denied a visa to the UK to tour Scotland, for the second time in a year, under the assumption by authorities that he might carry out ‘prohibited activities’. Finally he could obtain a visa, but last year Abu Rahma was denied entry to participate in an Edinburgh Festival Fringe on the grounds that he had no proof of income or bank statements, despite having proven that Fringe was sponsoring him and paying for his accommodation.

7. On April 24th a renowned Palestinian professor and astrophysicist, Imad al-Barghouthi, was arrested by Israeli soldiers in the West Bank. Barghouthi was previously arrested in 2014 while passing through the Israeli-controlled border with Jordan on his way to a conference in the United Arab Emirates.The leading scientist was interrogated about material he had posted on Facebook. Protests from scientists worldwide led to his release from prison a month later. Barghouthi said that he is still subject to detention at any moment without charge or trial because of his political views and political affiliations.

8. Combatants for Peace (CfP) activist, Shifa al-Qudsi, was refused entry into Israel on the 14th of July in order to attend the world premiere of the new documentary Disturbing the Peace, in which she appears. The special screening took place at the Jerusalem Film Festival.

9. The Israeli Occupation Forces arrested 35 Palestinian peaceful activists as they were cleaning an abandoned Palestinian factory in Tel Rumeida in order to establish a cultural cinema.

10. Not to forget about the Americans who aren’t allowed to visit Israel, among them Susan Abulhawa, a successful Palestinian/American based writer.

11. And in a last move from the Israeli Authorities we read about the transfer of a library from the Rockefeller Museum in east Jerusalem to the new, sprawling Israel Antiquities Authority headquarters being built in the western portion of the capital.