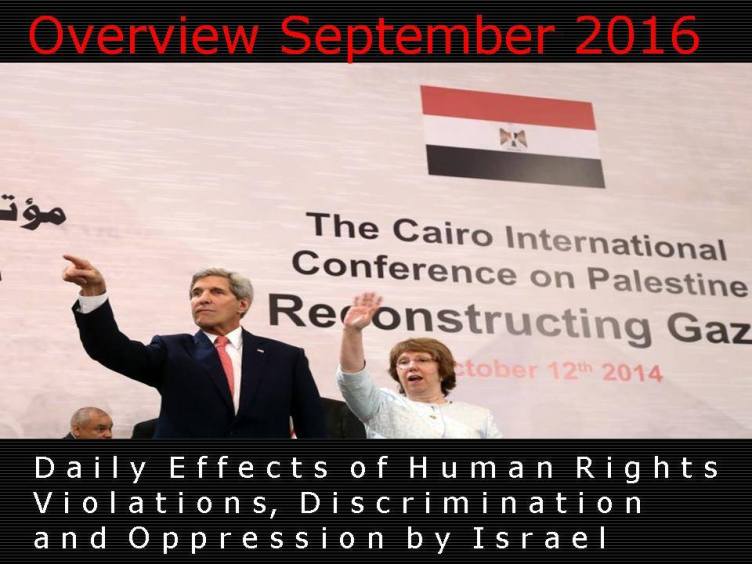 In the month of September 2016  Staat van Beleg could list 614 human rights violations (and 127 reports/analyses).

On 6 September the Israeli Prime Minister Benjamin Netanyahu received a warm welcome in the Netherlands. Although some members of the Dutch Parliament were critical about this visit the overall message to Netanyahu was a message of partnership and a continuation of trade relations.

On 14 September the Flotilla left from Barcelona aiming to arrive in Gaza by October 1. Until now only 55 EU Parliament members have signed an open letter to Federica Mogherini, calling on the European Union to: act to ensure the safe passage of the flotilla to Gaza; pressure Israel to lift its illegal blockade of Gaza; and insist that Israel comply with international law as a step towards restarting the Middle East Peace Process. Much more political support is needed to protect this action to break the siege. When the world keep on allowing the blockade of Gaza complicity and normalization will be the outcome since silence implies consent.

At the end of his presidential term Barack Obama will meet with Israeli Prime Minister Benjamin Netanyahu to discuss a two-state solution to the Israeli-Palestine conflict. Doesn’t this sound somewhat absurd after eight years of continuous Obama support to the occupation without restrictions and with a new military aid pack of $38 billion over the next 10 years? The deal will become the biggest pledge of US military assistance to another country in history. It is hard to believe that with this aid deal Israel will work towards a peaceful solution.

In a recent World Bank report (World Bank: Israeli restrictions, aid delays worsen stagnating Palestinian economy) we can read that the Palestinian economy remains “worrying” because of growth stagnation, delays in aid delivery and Israeli restrictions. This is a very good example of how the international community is being accomplice to the continuous dire situation of the Palestinian people. If we are talking about the delivery of aid in such a complex situation it can not be a simple act of transferring money. For every donor project worldwide, either long term aid or emergency relief, you will find a protocol for delivering this aid. We are missing out on project teams, progress reports and press statements conform transparency regulations.

The saying goes ‘silence implies consent’, but that doesn’t count for the continuous condemnations of the occupation by UN Secretary General Ban Ki-moon. He has slammed the Israeli occupation many times, but with empty diplomacy. Ban Ki-moon’s second term as the secretary-general of the United Nations is ending this December and his legacy in Palestine is one of failure in words and deeds (Ban Ki-moon’s legacy in Palestine: Failure in words and deed)!