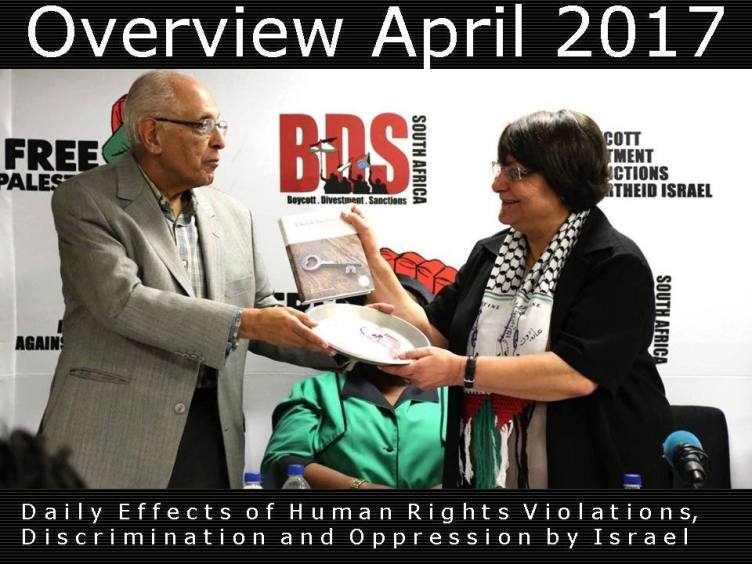 In the month of April 2017 Staat van Beleg could list 744 human rights violations, and 184 reports/analyses (see our archive).

Every month we are highlighting another aspect of the occupation of Palestine. This month we would like to show how the Palestinian occupation by Israel surpasses apartheid.

On 28 March the South-African freedom fighter Ahmed Kathrada passed away. Kathrada was also active for Palestine and a supporter of the BDS-movement. He claimed that the situation in Palestine surpassed apartheid.

“Israel is indeed an apartheid state.- And in certain respects it is worse than apartheid” 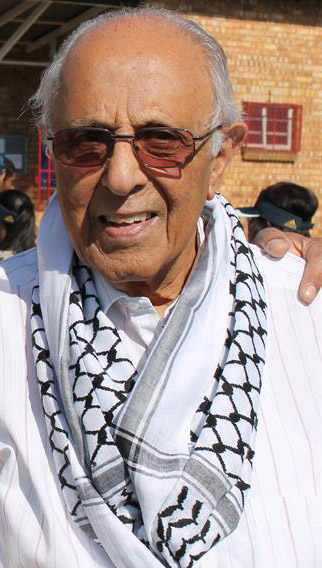 Just before the death of Kathadra the United Nations Economic and Social Commission for Western Asia (ESCWA) released a report which concluded that “Israel established an apartheid regime that oppresses and dominates the Palestinian people as a whole”.
Three days after the report was published head of ESCWA, Rima Khalaf, retired under pressure of the Secretary-General of the United Nations and Israeli officials. The report was banned from the commission’s website.

Whether apartheid laws in Israel are being implemented or not is not really relevant since many laws are being ignored either tailor-made to pretend legality. Whether certain practices are forbidden by international law seems no concern for Israel.
In a report that was recently released by The Palestinian Centre for Israeli Studies (MADAR) we can read “that extremism in Israel has escalated to include senior political circles and laws as well as government decisions. Collectively, they are intended to target the presence of the Palestinian people in their own land.” https://www.middleeastmonitor.com/20170421-report-reveals-escalation-of-israels-racist-laws-aimed-at-palestinians/
The so-called autonomy in Gaza as in area C of the West Bank is of little significance because of the imposed restrictions by the occupier.
If you talk about apartheid you are dealing with two groups where one group has more rights and therefore better living conditions. This is also what we see in the apartheid regime Israel but with the difference that the rights of the second group, the occupied Palestinians, are even being violated within their permissible area in an extent and frequency that will make the most elementary form of life impossible. The terminology apartheid is inappropriate. Words like expulsion or genocide would bring us closer to reality. (https://972mag.com/guess-which-of-these-human-rights-israel-guarantees-to-palestinians/126987/)

These are just some examples in a series of daily intimidations, restrictions and aggressions which has shown that Palestinians even within their small habitat cannot live a safe and decent life. This goes far beyond apartheid! It is a planned obstruction of any form of Palestinian survival, like a suffocation mechanism. 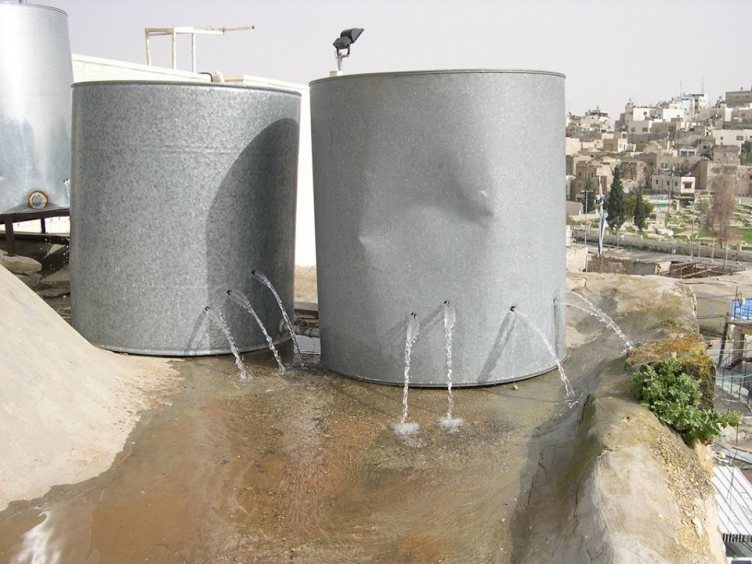 Water tanks on the roof of a house of a Palestinian family in Hebron that were punctured by Israeli settlers
(source: International Solidarity Movement)

Now there is a ray of hope which makes the work of freedom fighters like Kathadra not useless. ESCWA won’t let it go. They are currently working on a report on Israel which will equate the country’s economic impact on Palestinians to the impact of slavery on the US: https://www.middleeastmonitor.com/20170403-un-report-to-equate-israels-policies-to-slavery-in-the-us/.