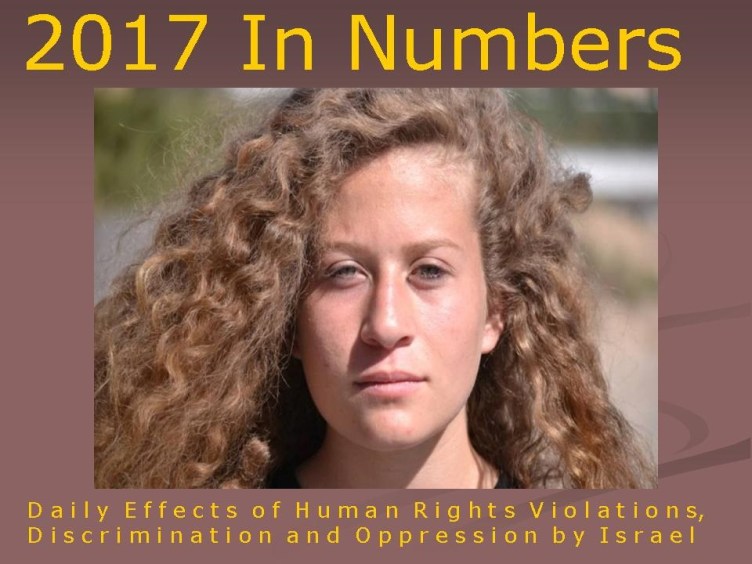 In the month of December 2017 Staat van Beleg could list 904 human rights violations and 163 reports/analyses.

This month we’re looking back at the year 2017. A lot has happened and it wasn’t good. Let’s start with the 153 Palestinians who lost their lives in 2017. 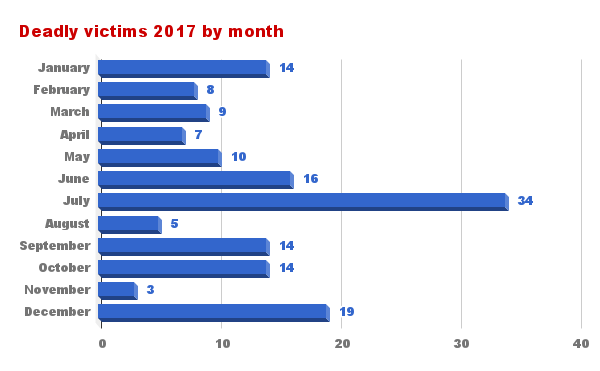 July and December were the most deadly months. In both these months there were many demonstrations and per usual these demonstrations were met with Israeli violence in order to suppress them. In July Palestinians protested Israel’s restrictions on their beloved Al-Aqsa mosque and in December Palestinians protested U.S. president Trump’s decision to recognize Jerusalem as the capital of Israel. Many protesters were shot dead and thousands more were seriously injured. 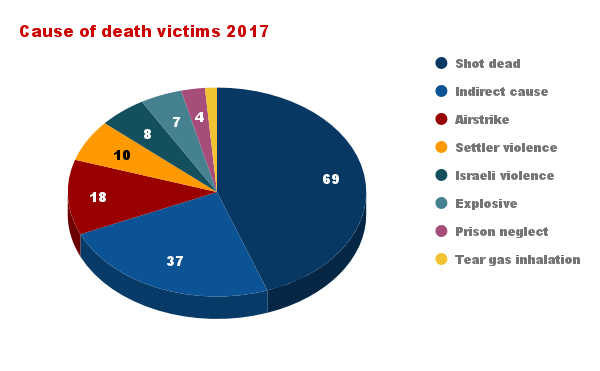 When we look at other causes of death it is clear that most of them are a direct result of Israeli violence, but roughly 24% are a result of indirect causes. This is often the case in the besieged Gaza Strip. Because of the Israeli restrictions crippling the economy and practically locking up the Gazans, getting a disease such as cancer is more often a death sentence then it should be. The remaining hospitals in Gaza, the ones that were not bombed by Israel, do not have adequate resources for treatment, leaving patients with no other option then to travel abroad. There, the next problem arises: a permit from Israel is needed and Israel is most often not willing to comply.

Making up only a small portion of the casualties one can easily overlook the two cases of death by tear gas inhalation. The first case was that of the 18 month old infant Abdurrahman al-Barghouthi. Israeli occupation forces showered his home with tear gas grenades and prevented ambulances from approaching those who were suffocating. The father of the toddler had to take him to the hospital on foot for a long distance. Abdurrahman was transferred to another hospital twice, but to no avail. He died two months later.

The second case was that of a seven year old boy whose identity was not disclosed. He died after inhaling poisonous gas used by Israeli forces to suppress a demonstration in al-Ramm town northeast of Jerusalem.

Tear gas under the Geneva Convention is characterized as a chemical warfare agent, and so it is precluded for use in warfare, but Israel uses it daily against the Palestinian population, even against children on their way home or to school or in schools themselves.

Tear gas is especially lethal for young children and people with respiratory diseases like asthma, but the long term effects of inhaling tear gas, often repeatedly, are not clear yet. Tear gas can cause burns to the skin or eyes, blindness, epileptic fits, cardiac arrest, miscarriages and stillbirths, but those statistics won’t show up in any reports.

No Palestinian in Palestine is safe

Age or gender offers no protection. If you’re a Palestinian in Palestine, you’re at risk. The most shocking statistic, as shown in the chart below, is that 27,3% of all deadly victims are children. The largest group is that of young adults between the age of 18 and 23 and the second largest group between 24 and 29. 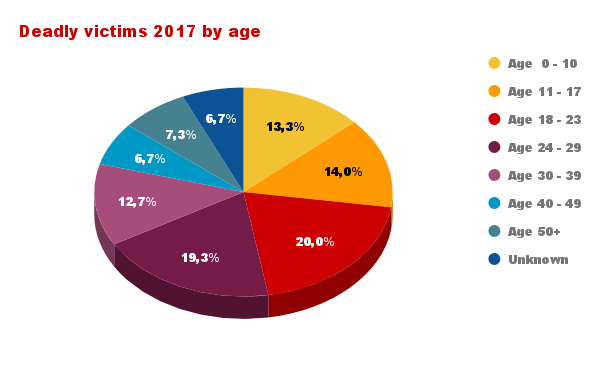 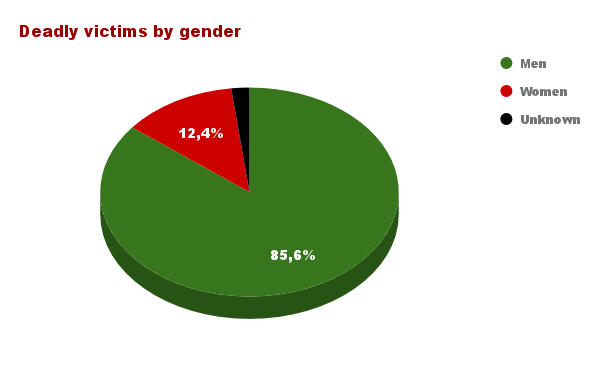 All these statistics consist of cases that reached the media and leave no doubts about the causes of death. However, there are 53 cases that we call suspicious. Palestinians who got shot dead, killed in an explosion or were the victim of a hit-and-run, to name a few. The circumstances in these cases often point at settler violence, but because there was no clear evidence we can not add these cases to our statistics. Israeli authorities do not investigate or follow up on cases like these as they would when the victims are Israeli.

Let’s take a look at the bigger picture: 8883 human rights violations in 2017 makes an average of 24,3 violations per day. Again, those are just the ones that reached the media. The reality on the ground is much worse. 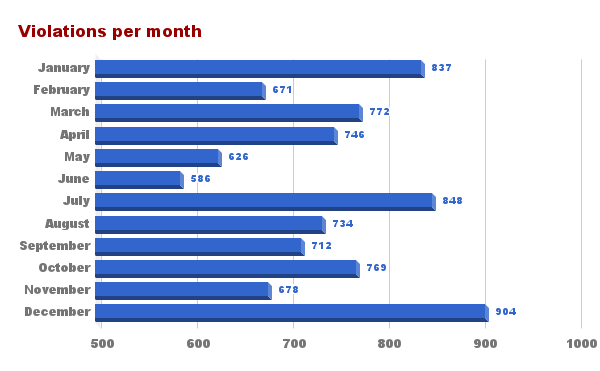 When we register the raids and kidnappings, we do not count the individuals. If -for example- in one small village like Nabi Saleh three Palestinians were pulled out of their beds and abducted at night, we count it as only one violation, even if it is in fact three. Why? The answer is simple: there are just só many of them that we have to draw a line somewhere. 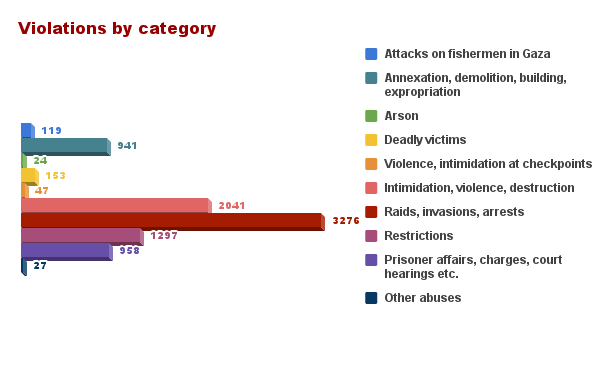 Under the Israeli occupation, Palestinians require permits to build a home. These permits are almost always denied, forcing them to build ‘illegally’ on their own land. However, Israel forces Palestinians to destroy their own homes or they bulldoze their homes and present the owners with a large fine. At the same time illegal settlements are being expanded and new settlements are illegally built for Jews only. In other cases, Palestinians are being evicted from their own homes to house new settlers. In addition, when a Palestinian is accused of a crime (even if the accused is already extra-judicially executed on the spot) the family home sometimes gets punitively demolished, which is a form of collective punishment, another violation of the Geneva Convention.

One might ask the question “Why is the arrest of a Palestinian a violation of human rights?” When Palestinians get arrested, or rather kidnapped or abducted, there is no Israeli soldier or policeman who will read them their rights. More often than not Israeli forces use (excessive) violence and once transferred to a place of detention the situation of a detainee, deprived of any rights, doesn’t get any better. (See our article about apartheid within the justice system.)

According to multiple (human rights) organisations 6,742 Palestinians were detained by the Israeli army in 2017, of which 1,467 children, 156 women, 14 Palestinian Legislative Council members and 25 journalists.

Many prisoners are held in administrative detention without charges or trial. These detentions get extended for up to 6 months at a time with no limit. Court hearings also get delayed repeatedly. Prisoners are often deprived of their rights such as family visits, proper clothing and medical care.