In the month of March 2018 Staat van Beleg could list 832 human rights violations (and 174 reports/analyses). (see our archive)

Every month we are highlighting another aspect of the occupation of Palestine. This month we will focus on genocide.

When talking of genocide, most people will think of the Holocaust, the killing of the indigenous people of America, the Bosnian genocide or any of the many other cases of mass killings. Not many people will think of the crimes committed by Israel on the Palestinian people, presumably because there is no systematical killing involved. But when we look at the definition of genocide, there is a lot more to it then mass murder alone. We don’t need to see large piles of dead bodies to determine whether crimes are being committed.

The internationally recognized definition of genocide is as follows.

Any of the following acts committed with intent to destroy, in whole or in part, a national, ethnical, racial or religious group, as such:

(a) Killing members of the group;

(b) Causing serious bodily or mental harm to members of the group;

(c) Deliberately inflicting on the group conditions of life calculated to bring about its physical destruction in whole or in part;

(d) Imposing measures intended to prevent births within the group;

(e) Forcibly transferring children of the group to another group.

Now let’s break that down and see if Israel’s actions would qualify as one or more of these forms of genocide.

a) Killing members of the group

One does not need to dig deep to find abundant, systemic acts of extermination against Palestinians. Al Nakba (translated: the Catastrophe) refers to the expulsion, rape and murder of the indigenous people of Palestine. From 1920 until the creation of Israel in 1948 there was the Haganah, the Zionist military organization representing the majority of Jews in Palestine, that in 1948 became the Israeli military. Between 1947 and 1949 the Zionists demolished 419 Palestinian villages. Around 760,000 Palestinians were made refugees and more than 13,000 were killed. Several mass graves were discovered in Jaffa in 2013.

But the ethnic cleansing has not stopped since then. Over the years, more than 400,000 Palestinian civilians were killed and two to three times as many were injured or crippled, either by tank fire, rockets, phosphorus, cluster bombs or other ways of violence. The latest large scale attack, called ‘Operation Protective Edge’ by the Israeli military, was in 2014 and caused the death of 2,202 Palestinians in the Gaza Strip.

However, Israel never completely seizes fire. Every now and then Israel carries out airstrikes above Gaza. In addition, unarmed Palestinian civilians are regularly being shot at in the border area and fishermen are being attacked at sea, not rarely resulting in inuries or death.

“What happened in Palestine was by no means an unintended consequence, a fortuitous occurrence, or even a ‘miracle’, as Israel’s first president Chaim Weitzmann later proclaimed. Rather, it was the result of long and meticulous planning.”

On ‘Land Day‘, March 30, thousands of unarmed Palestinians protested against the Israeli occupation. Along the border in the Gaza Strip, Israel deployed 100 snipers beforehand and made use of drones to spray what appeared to be nerve gas over the crowd. 1500 Palestinians got injured and 21 were killed. At the time of this writing that number can still climb as a result of severe injuries.

In the video below can be seen how the career of a Palestinian football player was ended by an Israeli sniper.

For starters, Israel has made use of starvation, which is in violation of Additional Protocol I to the 1949 Geneva Conventions, as a method of war targeting foodstuffs, crops and livestock throughout the occupied territories. More than a million olive trees were destroyed along with hundreds of thousands of fruit trees, leaving a key element of Palestinian economy in ruins. Almost 1 million Palestinian refugees are dependent on emergency food assistance, a tenfold increase on the 100,000 that required such support in 2000.

Since the beginning of the Gaza blockade on land, sea and air in 2007, Israel controls everything that leaves and enters the Gaza Strip. This enables Israel to reduce and control caloric intake, fresh water en much needed medicines.

It should come as no surprise that as a result of making life unbearable for Palestinians in Gaza, post-traumatic stress disorders and suicide rates are unmatched anywhere else in the world. Over half of Palestinians in the Gaza Strip who took part in a WANN study were tested as likely to have clinical depression. The reasons cited by most young people were an inability to travel outside Gaza, followed by continual power outages, the lack of employment prospects and (the threat of) Israeli attacks. 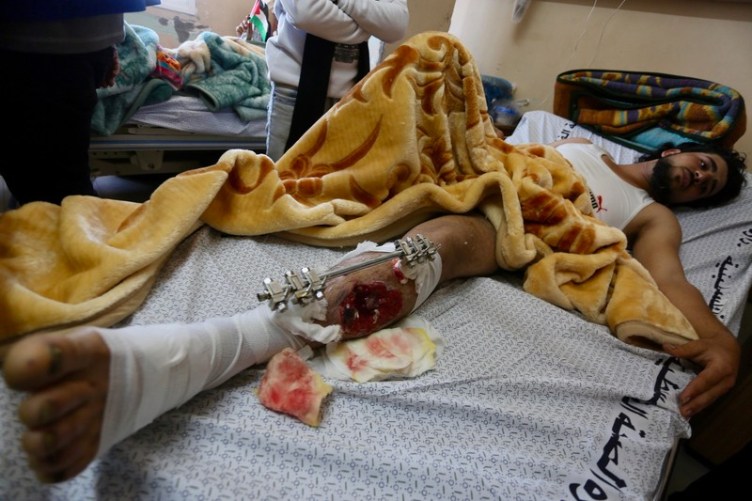 Muslih Sheikh Khalil, 24, was injured by a bullet that fragmented in his leg. On March 30, Israeli snipers used internationally prohibited ammunition on unarmed protesters in the Gaza Strip. (Photo: Mohammed Asad)

Israel has targeted and destroyed many hospitals, schools, apartment complexes, UNRWA shelters, daycare centres, mental health clinics and homes, leaving many families diplaced, homeless, economically crippled and on the brink of breaking point. Much needed construction materials are not allowed to enter Gaza, or only in small amounts. Three and a half years on from the 2014 hostilities, 2,500 Palestine refugee families remain displaced, and repairs to almost 50,000 homes remain outstanding.

Employment opportunities are stifled by the blockade – the unemployment rate of 42% in Gaza remains among the highest rates worldwide. On top of that, those who have jobs are struggling to survive. Fishermen are only allowed to fish within 6 or 9 nautical miles and farmers lose entire harvests because Israel sprays toxic herbicides onto their crops. The agricultural sector also suffers from the ban on exports, bringing a complete collapse nearby.

Gaza suffers from severe shortages of electricity with rolling blackouts. The use of alternative electricity (candles, firewood or generators) has resulted in house fires that claimed the lives of 100 children and adults.

In the West Bank, Palestinians under occupation are not much better off. Israel’s apartheid policies have also crippled their economy and are harming every little aspect of Palestinian life. The most important policies are:

“Nakba to me is an earthquake, not by the forces of nature, but by the powers of evil. It is not instantaneous but lasting for decades. I never could understand why Zionists destroyed my life and that of millions of other Palestinians or how this crime was portrayed as a victory of civilization and the fulfilment of divine will.”

d) Imposing measures intended to prevent births within the group

In 2014 agriculture minister Yair Shamir said that Israel was examining ways to lower the birthrate of the Palestinian Bedouin community. One can only speculate about the current status of that ambition, but it’s no secret that Israel is concerned about the Palestinian ‘demographic threat’. In 2013 Israel admitted the practice of injecting Ethiopian women with the long-acting contraceptive Depo-Provera. This tells us that Israel is willing to take extreme measures that fit their agenda.

Clauses a, b, c and d of the CPPCG definition of genocide are more than fulfilled by Israel, albeit that clause d was directed at a different group of people. Only one of the clauses would be enough to define genocide and Israel ‘scores’ four out of five.

It may be a ‘slow-motion‘ genocide, but it’s still genocide.