In the month of May 2018 Staat van Beleg could list 859 human rights violations (and 203 reports/ analyses). (see our archive)

Every month we are highlighting another aspect of the occupation of Palestine. This month we commemorate the victims of the Great March of Return in Gaza.

Facts about the victims

Since the start of the Great March of Return on March 30th in Gaza we could witness a disproportionate use of force by Israel against peaceful Palestinian marchers. Up to this date 131 Palestinians were killed, including 14 children. The average age of the victims is only 25 years. The youngest among the victims is an eight-month-old baby. More than 13,000 Palestinians got injured. On May 21nd Imemc News Agency gave some more details about the injured:

Yaser and Ahmad were both shot in the abdomen with a “single explosive bullet”. All of their internal organs were totally destroyed, pulverized according to Ashraf Al-Qidra, Gaza’s health ministry spokesperson. The bullets are the deadliest the Israeli army has ever used. Normally, a regular bullet breaks the leg [upon impact]. But these bullets create massive wounds, indicating that an explosion happened inside the body. It’s an expanding bullet. It pulverizes the leg, and the leg gets cut off as a result.  In the beginning of May it was reported that already twenty-four Palestinians have had their limbs amputated.

Medics on the ground say Israeli forces are shooting at demonstrators with a new type of round – never seen before – known as the ‘butterfly bullet’, which explodes upon impact, pulverising tissue, arteries and bone, while causing severe internal injuries (Al Jazeera report)

On 14 May alone 62 Palestinians were killed and more than 2700 were wounded while White House officials clinked champagne glasses with their Israeli counterparts 50 miles away in Jerusalem to celebrate the transfer of the US embassy from Tel Aviv. Hospitals in Gaza were struggling to cope with the wounded protesters. 54 of the victims wounded in the massacre committed by the Israeli army on May 14th are in a critical condition. 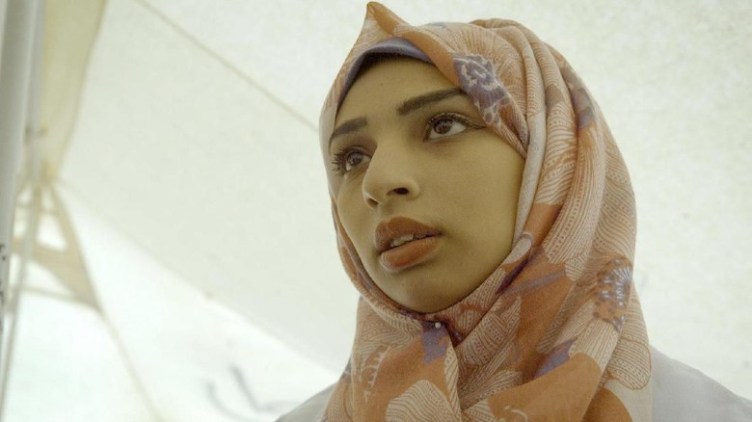 Razan al-Najjar (20), a volunteering paramedic, was trying to help an injured protester near the border fence when she was fatally shot by Israeli soldiers on June 1, 2018. (Picture by Yousur Al-Hlou)

The Myth of the Gaza border

Snipers of a well equipped army were lying behind sand hills shooting on unarmed people. Israel declared it was acting out of self defense to protect their borders. Palestinian activists have long criticized the use of the word “border” to describe the 1949 armistice line that divides Gaza and Israel, and which protesters in the Great March of Return have been trying to cross at great risk to life and limb. By invoking the term, Israel insists that its open-fire policy toward the march is part of its legitimate right to defend its sovereignty and security. It further claims that, because the government dismantled its settlements in 2005, it no longer occupies the Strip and therefore bears no responsibility for its conditions. Israel has turned Gaza into an area that is simultaneously separated from and annexed under Israel’s control. It is a purgatory designed to provide whatever answer is most convenient for shirking responsibility and justifying violence at any given time. This has obscured a controversial but perhaps inexorable fact: after 51 years, Gaza can hardly be described as “occupied territory” anymore. It is now a segregated, debilitated, and subjugated part of Israel; a replica of the districts, townships, and reservations that imprisoned native populations and communities of color in apartheid South Africa, the United States, and other colonial regimes. In other words, Palestinians are no longer being oppressed outside the Israeli state; they are being caged and brutalized inside it.

The dangerous Myth of Palestinian “Self-Genocide”

We already mentioned the myth of the Gaza border that Israel is so keen on to protect. But there is another myth that the media is desperately trying to sell to the world. Corporate media has moved from concealing Israel’s violence to openly justifying its genocidal acts as necessary counter-terrorism policy. As patently absurd as these narratives are, they continue to be a potent and dangerous force in normalizing Israel’s settler-colonial project. Blaming Hamas and portraying it as an almighty force intent on destroying Israel is used to dehumanize and demonize all Palestinians, who are stripped of their agency. Through this rhetoric, outlets like The New York Times implicitly justify the extermination of the Palestinian people. 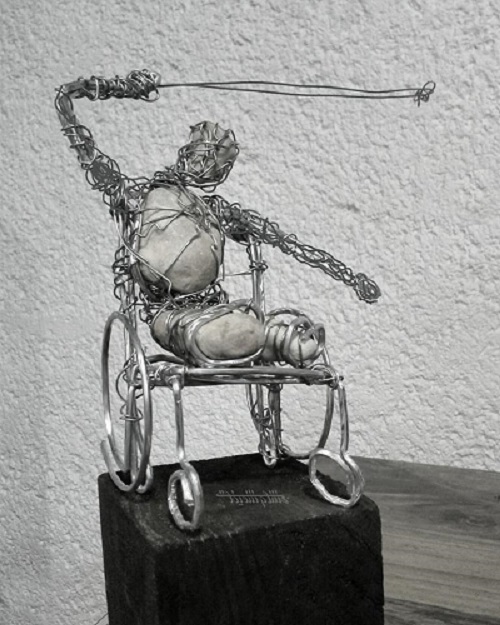 Artwork from Hisham Shdaifat to honour the Disabled Palestinian Fadi Abu Salah (30). He was killed on May 14th by Israeli snipers in Gaza with an exploding bullet through the chest.Born in the Gaza Strip in 1988, both of Fadi’s legs were amputated in 2008 after he was injured in an Israel attack on Gaza.

One would think that people all over the world who had witnessed so much violence and unjust in the last two months should get a chance to pay respect to the victims and to grieve in solidarity with the Palestinians who had to bury their loved ones on Nakba Day. Unfortunately not everywhere commemoration events ran smoothly. On May 14, a student at Jerusalem’s Bezalel Academy of Arts and Design put the names and ages of the dead Palestinians in Arabic script on black plaques and mounted them on one of Bezalel’s walls. It was a small-scale Palestinian version of Every Person Has a Name. Jerusalem Mayor Nir Barkat, posted an angry tweet protesting the sacrilegious exhibit:

“I was shocked to see hung on the walls of Bezalel the names of the terrorists who were harmed while trying to breach the Gaza border fence in order to kill Jews. There is a limit and a clear red line to the cynical use of freedom of speech. I have contacted Bezalel’s administration and demanded that these plaques be removed immediately and that these provocations be prohibited!”

A request by the Irish Republican Party, Sinn Fein, to open a book of condolence in Belfast city council for Palestinians killed in Gaza was blocked by Unionists allied with the Northern Ireland Friends of Israel group. And a New York school’s decision to hold a minute’s silence for the 62 Palestinian protesters who were killed by Israeli soldiers on the Gaza Strip border has been slammed online after the story went viral.

The Palestinian lives that were lost at the border of Gaza during the Great March of Return events shouldn’t be lost in vain. We will remember each victim by name and age to remind a world that is not willing to carry your cause to levels of justice is complicit in Israeli crimes and genocide on the Palestinian people. It’s up to the world now. Palestine has suffered enough.

131. Ramzi Najjar (Israel holding body)
For updates on the victims visit our website.