A wounded Palestinian demonstrator, Haitham Abu Sabla, is hit in the face with a tear gas canister fired by Israeli troops during a protest marking al-Quds Day, (Jerusalem Day), at the Israel-Gaza border in the southern Gaza Strip June 8, 2018. Ibraheem Abu Mustafa / Reuters

In the month of February 2019 Staat van Beleg could list 719 human rights violations (and 146 reports/ analyses). (see our archive)  This month a highlight on Israel’s use of teargas canisters as ammunition.

Since the start of the Great March of Return in Gaza we can read the reports of Palestinians that lost their lives by Israeli snipers and how they died. What we also read are the numbers of injuries. Some agencies even report on how people got injured. Through this reports we learned for example that Israel is using bullets resulting in serious injuries with often the need of amputations. Also the severe impact of teargas being used on peaceful marchers and protesters was being revealed. But what we also saw was the use of teargas canisters as ammunition on Palestinians and even on ambulances. This is not a new development. Israel has been doing this for years but because it were isolated cases or during protests and marches that got less media attention it was underexposed. As an indicator we will reveal some cases where teargas canisters were being used as ammunition by Israeli forces. Since the circumstances of injuries are not always being mentioned in the media we can only guess how much more Palestinians have been injured by a teargas canister.

As mentioned before there are no full reports published on how Palestinians got injured but there are some indicators.

The best indicator we could find comes from a recent report of the UN Human Rights Council following an investigation on alleged human rights violations by Israeli soldiers on civilian protests in Gaza in the period of 30 March until 31 December 2018. In the table below is stated that 1084 people were directly hit by a teargas canister. 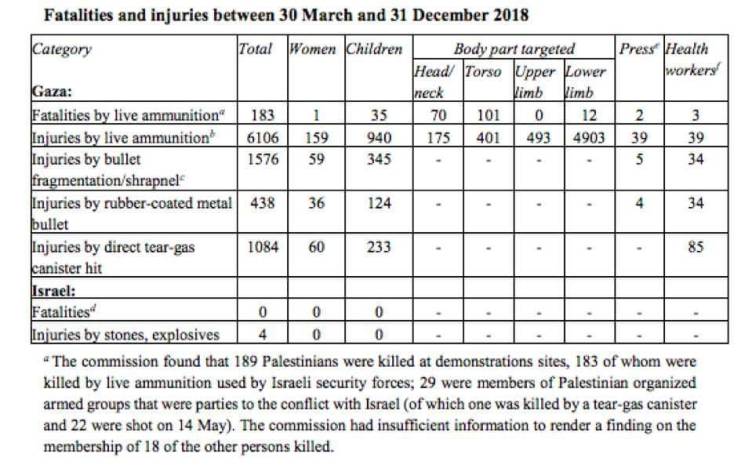 A second indicator comes from Al-Haq, an independent Palestinian non-governmental human rights organization based in Ramallah. They regularly publish accurate reports. On 14 May 2018, the deadliest day of the Great March of Return, the Israeli army killed 59 Palestinians, including seven children, a person with disability, and injured 1,861 Palestinians. To get an idea about the injuries caused by teargas canisters: “The IOF injured 276 Palestinians in the North Gaza Governorate, including 50 children and ten women. Amongst them, 249 were injured by live ammunition and 25 were injured by direct gas canister hits, while the others suffered from gas exposure, injuries, and bruises.”

Protocol on how to use Teargas as Crowd Control

Use of teargas in warfare (as with all other chemical weapons) is prohibited by various international treaties that most states have signed. Police and private self-defense use is not banned in the same manner. Armed forces can legally use tear gas for drills (practicing with gas masks) and for riot control. Typical manufacturer warnings on teargas cartridges state “Danger: Do not fire directly at person(s). Severe injury or death may result.” Such warnings are not necessarily respected, and in some countries, disrespecting these warnings is routine. However, teargas guns do not have a manual setting to adjust the range of fire. The only way to adjust the projectile’s range is to aim towards the ground at the correct angle. Incorrect aim will send the capsules away from the targets, causing risk for non-targets instead.

We may conclude that there is enough evidence that firing of teargas canisters directly at individuals is a routine practice by soldiers and border police officers in the West Bank and at the border of Gaza. It has already claimed the lives of people and has injured others in recent years. It is an easy way to injure people that are gathering in marches and protests. It has the benefit of the doubt that it could give the impression that marchers or protesters were accidentally hit by a teargas canister. It can injure people without claims that life fire was being used on peaceful protesters. The injuries from teargas canisters are often severe and can result in lifetime disabilities.