In the month of April 2019 Staat van Beleg could list 620 human rights violations (and 171 reports/ analyses). (see our archive) This month a focus on the Nakba as seen through art.

“Our friends when they die are buried in us… Their bodies go to the graveyard but their personalities stay with us. We Palestinian artists are an orchestra. We are one choir… We have many friends and many died. We are a walking graveyard of these personalities who left.”

For Palestinians all over the world the month of May will be marked by the Nakba, the 1948 Palestinian exodus when more than 700,000 Palestinian Arabs fled or were expelled from their homes. Unfortunately the Nakba never ended. In Ilan Pappe’s book Ten Myths About Israel we can read about the importance to recognize the 1948 events as an ethnic cleansing operation, so as to ensure that a political solution will not evade the root of the conflict; namely, the expulsion of the Palestinians. But how to recognize the Nakba as an ethnic cleansing operation when many people worldwide still aren’t aware of the catastrophe. It’s a sad reality that after 71 years Palestinians and advocates for the cause still have to raise awareness. Every year around May all over the world events and marches are being organized, stories are being shared, movies are being screened and articles are being written. Among all these activities artists have always played a profound role. Since 1948 artists have been creating artworks to tell the story of the Nakba. They never stopped remembering the world of this grave injustice. In their works there always was and still is a presence of the Nakba since everything taking place in Palestine today is a continuation of the Nakba. Israel has always tried to whitewash the Nakba, even when it comes to art.

To commemorate the Nakba the idea came up to organize a small digital art exhibition and we found eight artists willing to participate. We asked them to contribute with a painting that represents the Nakba for them. With this exhibition we also want to honor the artists that have been working so hard over the years on the Palestinian narrative and heritage.

Born in Haifa Abed Abdi is one of the most prominent international recognized Palestinian painters, graphic designers, sculptors and art lectures working today. After studying in Dresden Abdi became the first Palestinian to build monumental art on native soil.

“This work is one of the paintings under the name “The expulsion from our city Haifa on 22 April 1948″. It is the last work from a trilogy I painted last year in Haifa. It is my own Nakba which I experienced with my family while fleeing to Libanon and Syria.” 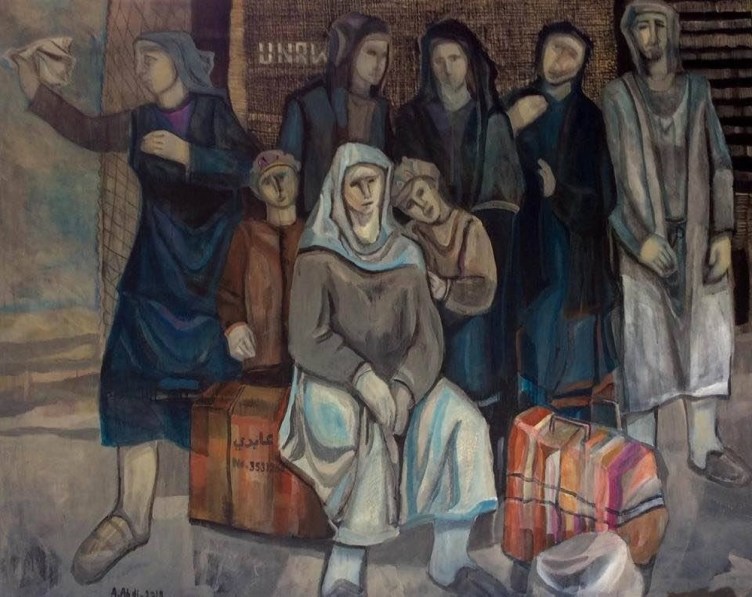 As the only non-Palestinian participant Ramona Wadi is a freelance journalist, feature writer, political analyst, book reviewer and blogger. Ramona is also a freelance artist working in watercolor, charcoal and soft pastel. She is an advocate for the Palestinian cause as we can see in her work.

– “Spirit of Return”, which I painted in 2017, is undoubtedly what I consider the focus of my watercolour art depicting impressions of Palestinian memory. This painting symbolises the inscription of an unfinished story. Just as the Nakba is ongoing, the dream of return is also resilient, regardless of the complicity in thwarting the Palestinians’ right to return to their homeland. The watercolour painting seeks to depart from the memory of Palestinians themselves, in order to assert that no other entity has the right to dictate any parameters to the Palestinian demand to historic Palestine. – 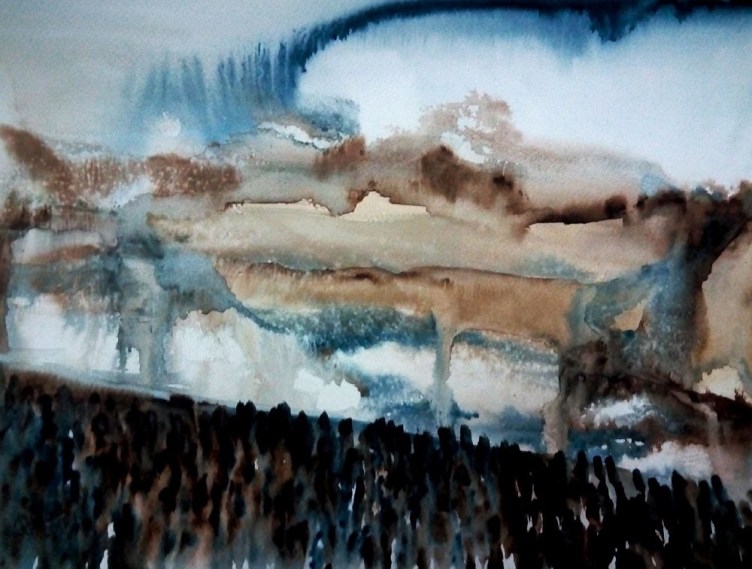 Born in Al-Arroub (Palestine) Jamal Khamis lives and works in Amsterdam. In 1973 Khamis studied as a guest in Remscheid, Germany and later in 1976 he studied at the Art Academy of Frankfurt. After finishing his art education in Frankfurt, he visited several academies. These academies resided in Remscheid, Paris, Amsterdam and Rotterdam. He went to Paris in 1983, where he attended several academies and held multiple exhibitions. In 1986, Khamis extended his reach by becoming more of an international artist. Exhibiting in places such as America, Japan, Canada, Australia, Sweden, the Netherlands and Denmark. Khamis founded the Dutch Artist and Creative Intellectuals Foundation (1994) and an artist collective named the Toro Action Art Movement International (1999). 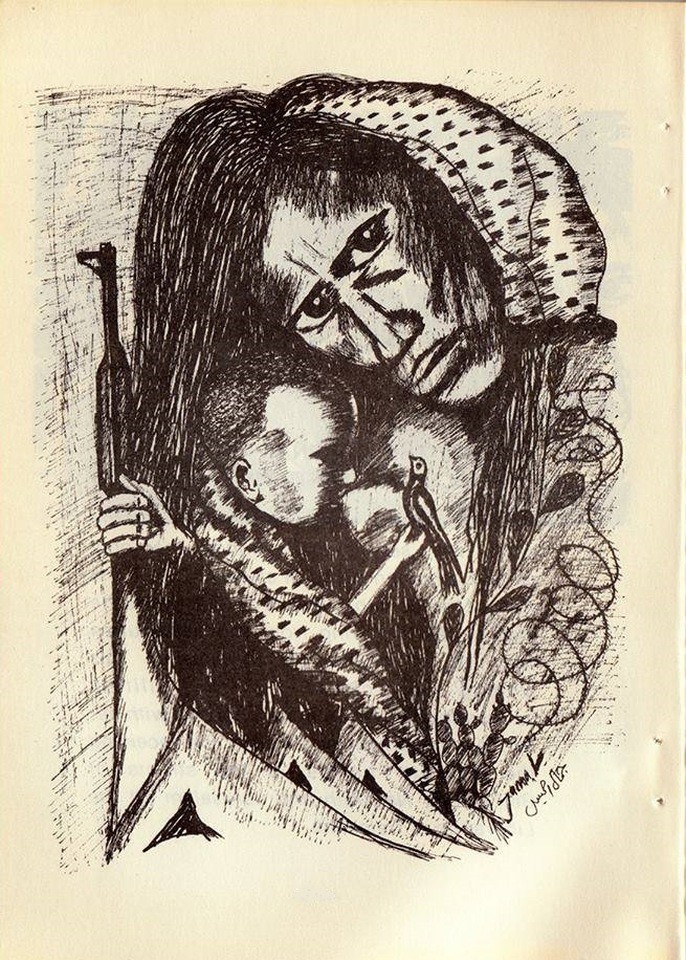 Born in Jabalaya refugee camp in Gaza Maher Naji went to Russia in 1983, where he earned a B.Sc. in art and a Ph.D. in architecture at the Baron Stieglitz Academy of Art and Architecture in St. Petersburg. During his stay in Russia, Naji participated in numerous art exhibitions. Since returning to Gaza in 1994, Naji has continued his career as an artist, exhibiting his paintings at various art festivals, galleries, and other venues.

About the artwork: “Christ did not descend from the cross” – 2016

“The tragedy of the Palestinian people did not start with the exodus “Al Nakba” in 1948 but 2000 years earlier, when “the great Sanhedrin” rendered a judgement to crucify Jesus and “Pontius Pilatus” executed it. From here the tragedy of the Palestinian people began, with the crucifixion of the first Palestinian martyr, and their pains went on .. The victim stayed the same over the years, but the executioner and the judge have changed their roles!! A new”great Sanhedrin” represented by European colonial countries for the second time sentenced the entire Palestinian people to death -the Balfour Declaration-, and the Zionist gangs under the name of “Israel” executed this genocide.” Born in Al Bureij refugee camp (Gaza) Raed Issa studied Computer Science in the Islamic University in Gaza. Raed turned to the fine arts, taking courses in mural painting, drawing and oil painting. He has had two solo exhibitions in Ramallah and has contributed to several group exhibitions in Palestine, Jordan, Switzerland and Australia, including the traveling exhibition in France of 10 young Palestinian artists (2003-04).

“We as Palestinians have a particular connection with stones. It has a symbolic presence of resistance and revolution over the huge unjust policies of the occupation. This presence of stones is becoming a public legacy. It’s presence is firmly engrossed in the common beliefs of resistance. Children of stones and the dream of Palestinian return have been started to address the catastrophe, “Nakba” a chapter of displacement in the modern history, a people expelled from their homeland”. 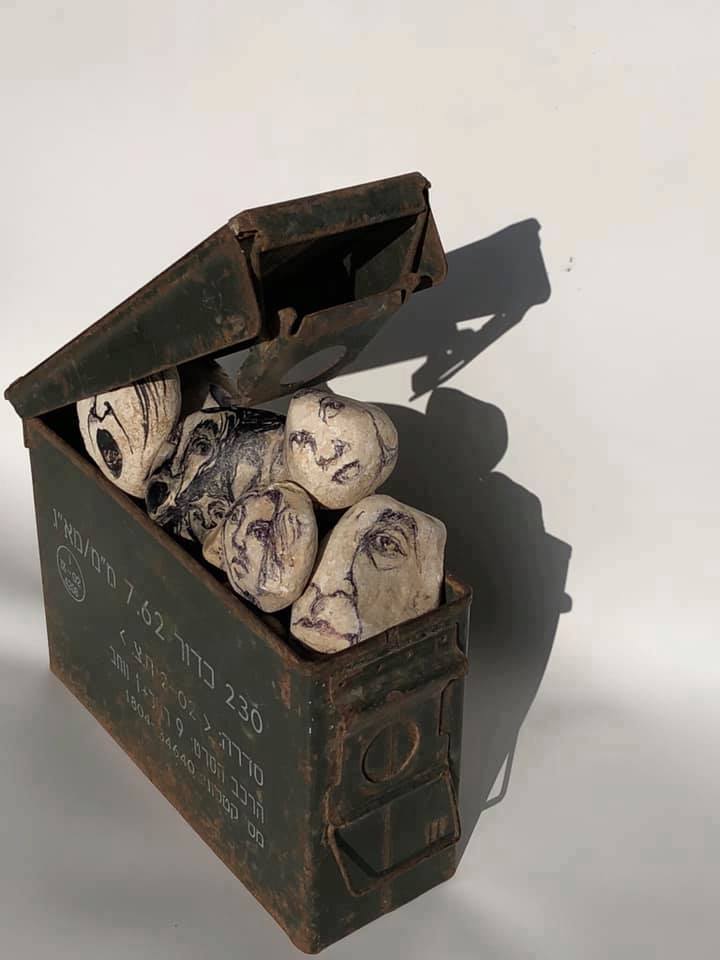 “Nakba, man made catastrophe, inflicted on the innocent Palestinian people, a wrong never righted.
For the past 71 years, we have been dispersed to the four corners of the earth, each and every one of us, carrying Palestine in our hearts. Our homeland is the litmus test for Humanity, and those who believe it has nothing to do with them are gravely mistaken; 67 words in the treacherous Balfour Declaration that spelt our enslavement, 67 thorns in Palestine’s flesh; we shall never tire, never stop, never surrender our fight for our God-given right to return Home. Long Live Palestine!” 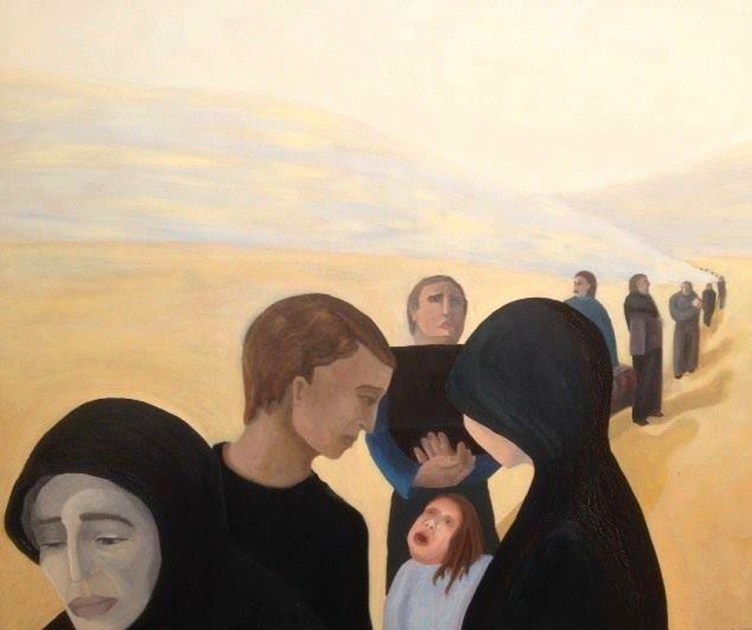 Born in Al Bureij refugee camp Mohammed al Hawajri lives and works in Gaza, and is a founding member of the Group confluence of contemporary art (eltiqa group). He has participated in numerous group exhibitions inside and outside Palestine during the past years.

“Maryam is the name of my beloved mother whom I lived with since I opened my eyes. But my paintings reflect all mothers. Every Maryam has her own life, or the one imposed upon her in our Arab world. Despite whatever strikes her she continues to renew hope and tenderness within us. In these (art)works, I certainly showed the beauty of a woman. Her chest is decorated with images of a changing reality while we are surrounded by fluctuating reasons and circumstances. Here, the woman is like the land which sprouts and bears fruit while we are like the fixed trees, steadfast upon it. My artistic project bears the spirit of beauty. It is part of the search for hope and life at a time in which many of the beautiful things, which we have lost due to the political inversions, have begun to disappear. Here I would like to say that beauty helps to keep spaces of hope open for the anticipated future that will be adorned with beautiful colors.” 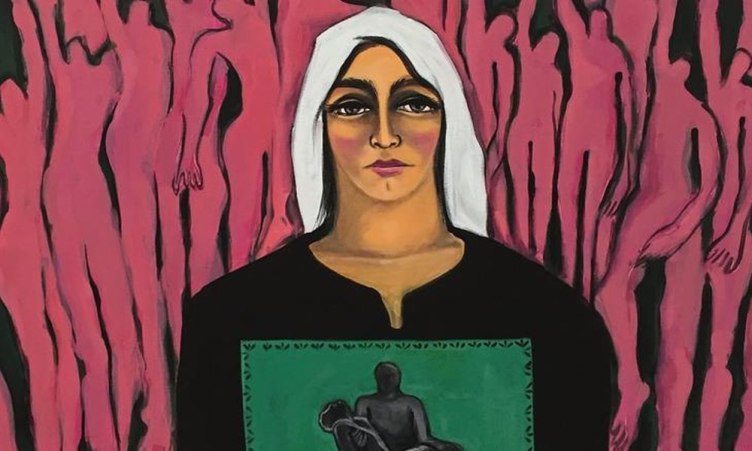 Born in Gaza Malak Mattar is the youngest participant. Malak paints powerfully expressionist faces, figures, and semi-abstract designs. She first started painting at age 13, during the 51-day Israeli military assault on Gaza in 2014. Mattar’s artwork quickly began to garner interest from galleries beyond Palestine. Her first international exhibition was in Bristol, UK, in 2017.

Malak asked us to make a choice. We did so and we thought as the last contribution it had to be something hopeful. This is one of Malak’s latest works.

“When peace dies
Embrace it,
It will live again.” 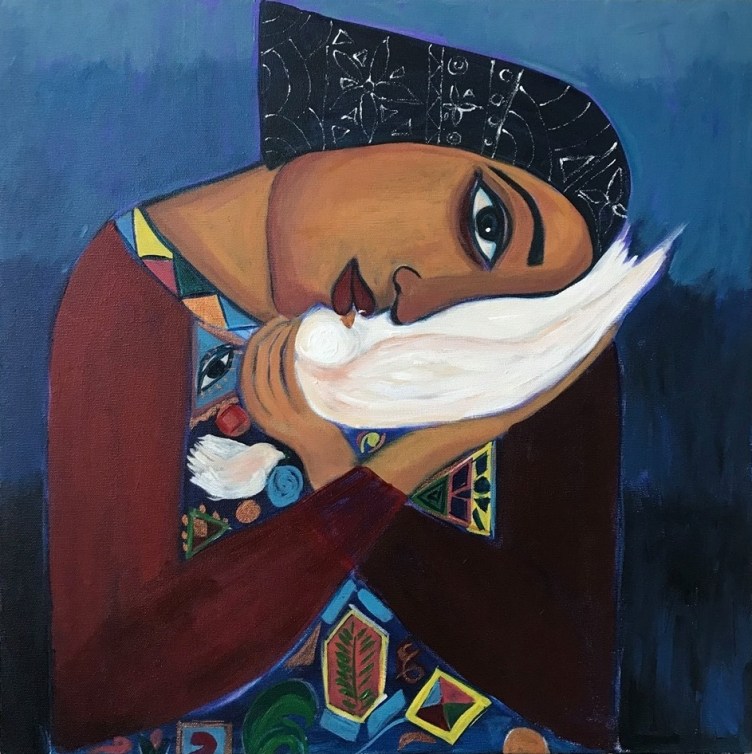