In the month of June 2019 Staat van Beleg could list 542 human rights violations (and 177 reports/ analyses). (see our archive). This month we highlight the killing of a paramedic in Gaza.

Exactly five years ago the latest Israeli onslaught on Gaza took place, known under the name of Operation Protective Edge. Unfortunately, despite a truce, the Israeli assaults on Gaza never stopped. The coastal enclave where almost two million caged Palestinian people are trying to survive has been shelled over the years on a regular basis and has resulted in several casualties.

Restrictions on free movement, restrictions on incoming goods including medical supplies and a shrinking fishing zone are at the order of the day. Still every week farmers and shepherds are being targeted during incursions near the separation fence and fishermen are being attacked at sea.The sound of drones to remind people that they are under constant control is nail-biting. The poverty rate in the Gaza Strip has exceeded 80% and according to the WHO more than 97% of Gaza’s water does not meet quality standards. Since 30 March 2018 almost 300 Palestinians got killed during the Great March of Return and circa 29,000 got injured. 7,000 of them had gunshot wounds, mostly in the lower legs. Some 120 amputations have taken place since the beginning of the demonstration with 20 children among the amputees and 1,700 Gazans could face amputations due to the lack in health funding. Journalists en paramedics were being targeted and strange enough we don’t read it in the mainstream news. When a paramedic would have been killed during his work in Europe it certainly would appear on the front page of any newspaper but when it comes to Palestine it seems the world goes blind and deaf. The killing of a Palestinian paramedic seems of less or even no importance. That’s why we will send a reminder with this contribution of Nedal Samir Hamdouna who is living in Gaza. 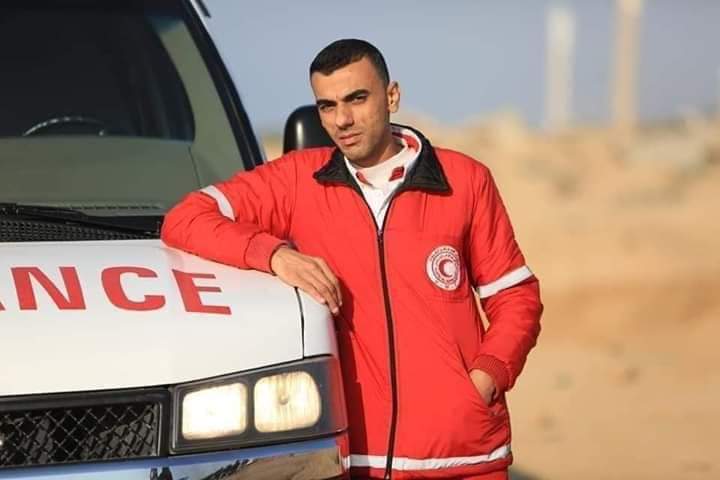 Paramedic Mohammed Al Jadeili, 36, from Al-Bureij refugee camp, central Gaza Strip, has succumbed to wounds he sustained on 11 June, when Israeli snipers opened fire at him on the Gaza border. Mohammed was injured in his head with a rubber bullet, shattering his skull, while on duty evicting injured people on Gaza borders last month.

AlJadeili was working for the palestinian Red Crescent, and Red Crescent has declared “the occupation attacks against the medic teams is a violation of international law.”

In Gaza hospital yards, while his family was waiting, his daughter, 6 years, was crying while receiving the body of her father, relatives consoling her that “Your dad is sleeping, he is sleeping”. But her tears revealed that she knows the truth. His son, Adel, 10 years, was leading his father’s funeral, drowned in tears, asking people to pray for his father’s soul.

His wife said she cannot compensate the kindness of their father, he was very kind, loved his children, and he was supposed to travel soon, asking his sons what gifts they would like him to bring home. She adds, “I have 4 children, the eldest Adel, 10 years, Rama, 9 years, Mervet 5 years and Zaed, 7 months.”

According to the Ministry of Health, Mohammed Al Jadeili was the fourth paramedic killed, along with 685 injured since the March of Return began March 30th, 2018, east of Gaza Strip borders.