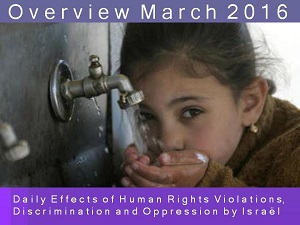 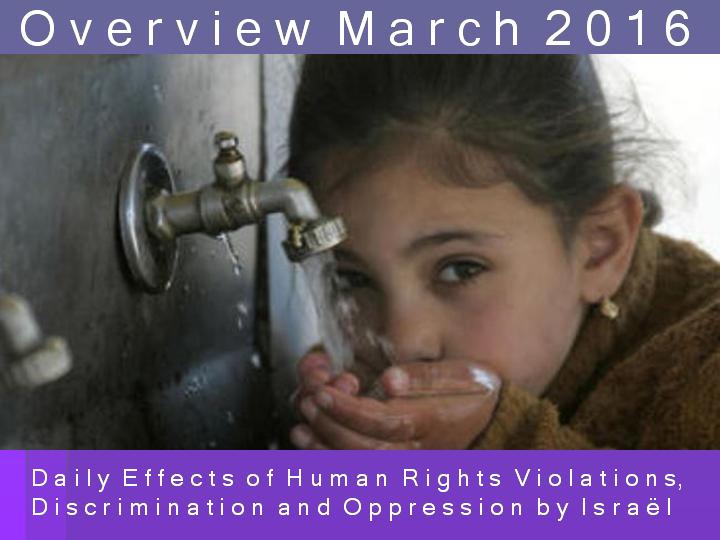 Spring has just begun and temperatures are already rising in Palestine. A long warm summer lays ahead for the Palestinian people. If we think about dealing with long and hot summers the first thing comes to mind is water which is a very important basic human right. It has been recognized in international law through a wide range of international documents, including international human rights treaties, declarations and other standards. The clearest definition of the Human right to water has been issued by the United Nations Committee on Economic, Social and Cultural Rights:

“The human right to water entitles everyone to sufficient, safe, acceptable, physically accessible and affordable water for personal and domestic uses”.

Quite alarming are the recent findings about contaminated drinking water in Gaza. As we can read in an article of Mondoweiss on World Water Day, 22 March, according to the Palestinian Authority 45 percent of the water processed in desalination plants is contaminated. Ninety-five percent of the strip’s 1.8 million residents rely on this polluted water.

In 2012 the United Nations warned Gaza is facing a water and sanitation crisis due to Israel’s blockade of the coastal Mediterranean strip. All of the water that ends up piped into residents’ homes originates from one underground aquifer. Ninety-six percent of the reserve is unsafe for human consumption. The over-extraction of this aquifer and the intrusion of seawater, coupled with the infiltration of agricultural fertilizers and untreated sewage, have all resulted in levels of chloride and nitrates up to three times the World Health Organization’s (WHO) recommended standards.

Not only is Gaza’s water dangerous to drink, it often does not flow out of the faucet.
The average water consumption per person per day in is as low as 80 liters, well below the WHO minimum standards of 100. And of those 80 liters, most are unfit for human consumption.

Besides the limited access to safe water, the infrastructure in lots of areas is also fault. In total 23-percent of the population in Gaza are also do not have sanitation services.
Children have constant bouts of colic and severe diarrhea. It is believed these illnesses are most likely related to the poor water quality and the sewage flooding the streets.

Purchasing expensive tanks of clean water is unaffordable. For those who can pay for clean water, they will spend up to a third of their income, found the water advocacy group E-WASH

The Israeli blockade imposed on Gaza since 2007 severely impedes the recovery and development of the water and sanitation sector, delaying and hindering more than 86-percent repair projects due to the lack of materials, according to Gaza’s Coastal Municipality Water Utility.

The Jerusalem Post of 17 March 2016 stated that Gaza sewage crisis is a ticking timebomb for Israel. Gidon Bromberg, founder and Israel director of EcoPeace, told The Jerusalem Post that although there is a sewage treatment plant in the Gaza Strip, it does not have enough electricity to run. This means some 90 million liters of raw sewage are flowing into the Mediterranean Sea on a daily basis, as well as into underground aquifers. This has serious implications for Israel and Egypt, especially for residents who live closest to Gaza and would be most affected if diseases such as cholera or typhoid were to break out and then enter the region’s drinking water.

The world was well informed about the water crises in Gaza. The last warning was made in a UN press release of the World Water Forum on 12 April 2015 where the following remark was made relating to the water crisis in Palestine: “Water use has been one area where limited cooperation has been possible between Israelis, Jordanians and Palestinians.  Still, a more equitable distribution of water between Palestinians and Israelis on the occupied West Bank could be an important confidence-building measure in the troubled situation today.  And the water crisis in Gaza exacerbates an already desperate situation.  There is an urgent need to accelerate infrastructure projects, including a desalination plant, to help address the chronic water shortages in the area.“

A year ago they were already talking about a desperate situation and since then the situation has only worsened!