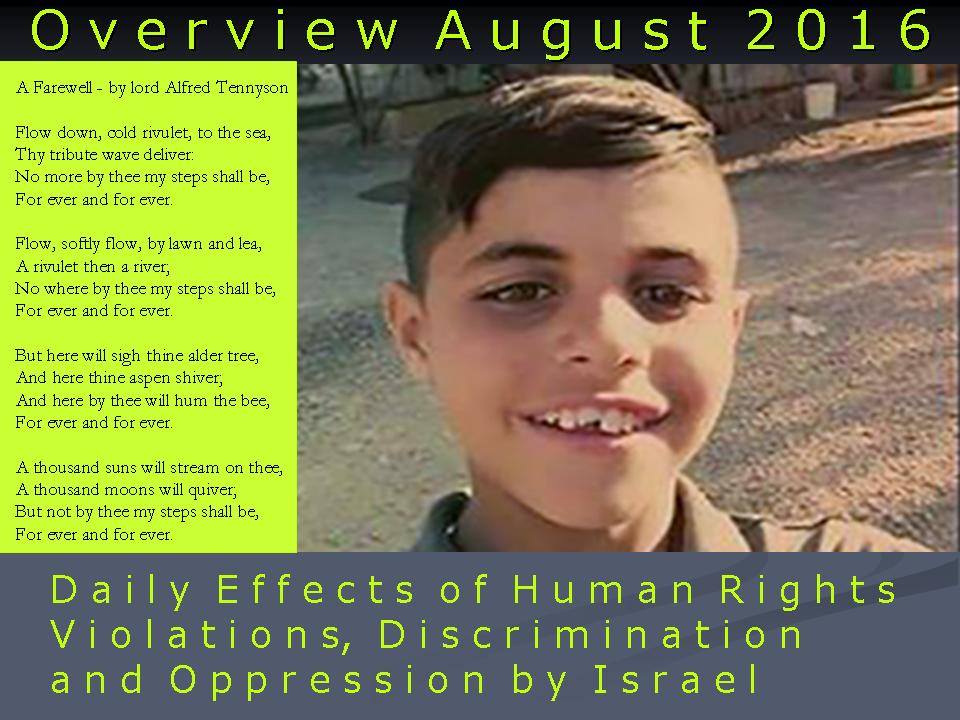 In the month of August 2016  Staat van Beleg could list 630 human rights violations (and 121 reports/analyses).

Every month we are trying to highlight another aspect of the occupation of Palestine. During the month of August we could witness an increase of Israeli violations in different aspects of Palestinian lives. We saw some fatalities and lots of injuries, we saw raids on a daily basis with violence in different towns and villages with house searches, many arrests and demolition orders. In the mean time many villages in ‘area C’ of the West Bank are under a constant threat of demolition and many houses, structures and animal shelters already have been demolished. Dozens of families became homeless. But what caught our special attention by observing the ongoing Israeli ruthless acts of destruction was that more and more children are being targeted by Israeli aggression and oppression. Please find here some facts and figures of violations were children are involved.

In the beginning of August Israel’s parliament, the Knesset, passed a bill into law permitting the imprisonment of children in East-Jerusalem under the age of 14 if the child committed acts of “terrorism”.

Already in May 2016 UNICEF warned of an excessive use of force, particularly in relation to incidents where Palestinian children were shot dead.

Last month we saw 10-year-old Muhyi A-Tabakhi who was critically injured by a black sponge bullet round fired at his chest and died shortly afterwards in hospital.

On 4 August a Palestinian girl suffered injuries after a horde of Jewish settlers brutally beat her near Rammun town in the Ramallah and al-Bireh governorate. The settlers stabbed 11 sheep and killed some of them before the set the place around the girl ablaze in a bid to kill her and fled the scene.

On 7 august a nine-year-old disabled child was left injured at dawn abrupt sweeps across the West Bank and Jerusalem.

On 8 August an eight-month-old female infant suffered from inhaling pepper spray during an Israeli police raid on her parents house in Silwan district in Eastern Jerusalem.

The Palestinian Committee of Prisoners’ Affairs revealed on August 15th that Israeli forces have detained 560 children from occupied East Jerusalem since the beginning of 2016, 110 are still being held in Israeli jails,

On 16 August during an arbitrary abduction sweep across the occupied West Bank and occupied Jerusalem a four-month-old girl was left injured.

In an completely insane incident an Israeli police officer bullied an eight-year-old Palestinian girl from Hebron in the West Bank and seized her bike.  It will be no surprise that The Justice Ministry’s unit for investigating police officers decided not to press criminal charges against the police officer.

In a recent move the Israeli Occupation Authority in Occupied Jerusalem has omitted all texts and pictures that are related to Palestine and the struggle against the occupation from Palestinian school books before distributing them.

Another child victim of the Israeli occupation is the Palestinian child Ahmad Dawabsheh who was released from hospital last month where he had been fighting for his life for over a year. This month he returned back to hospital after worsening of his health condition. Ahmed survived an Israeli arson attack carried out by Jewish fanatic settlers against his entire family and is the only survivor.

The Palestinian Prisoners Society sounded the alarm over the health status of three minor detainees infected with mumps in the Israeli Ofer jail.

Gaza’ daily reality:  As Awwad fills her flask, 6-year-old Abboud Masoud and his sister Noura, 8, stand with other children near the taps, waiting for their turn. “We come here because it [water] is for free. We do not have clean water at home,” he says as he prepares to leave the place on his small bicycle, already loaded with water canisters.

The Palestinian prime minister’s office condemned an Israeli demolition order on a primary school in the Bedouin village of Khan al-Ahmar in the Jerusalem area. The Khan al-Ahmar school, which accommodates 160 students from five different Bedouin communities, is located in the sensitive E1 area northeast of Jerusalem and west of the illegal Israeli settlement of Maale Adumim in the occupied West Bank. It has been slated for destruction by Israeli authorities for years.

Three Palestinian minors are currently being held without charge or trial in Israel’s Ofer prison, the Palestinian Committee of Prisoners’ Affairs said in a statement on Thursday. The three, all under the age of 18, were identified as Ahmad Nimr, Luay Nairoukh, and Hamzeh al-Silwadi.

Israeli soldiers reportedly used electric shock on a 16-year-old Palestinian prisoner, according to a statement released on 18 August by the Palestinian Prisoner’s Society.

Teenage Palestinians in Israeli prisons and detention centers say they have been tortured, verbally abused, kicked, and slapped by Israeli interrogators during detention and interrogation.

Even unborn children are not safe. Female Israeli soldiers assaulted Hadeel Al-Faqih, the wife of Mohamed Al-Faqih who was killed by the occupation forces in Hebron, and attempted to abort her baby.

Palestinian students in annexed East Jerusalem are receiving less than half of the funding of their Jewish counterparts, Haaretz has reported.

The Israeli occupation forces stormed a Palestinian school in Jenin’s southern town of Yabad and cracked down on schoolchildren on the first day of the new academic year.
http://english.palinfo.com/site/pages/details.aspx?itemid=80413

Three Palestinian schoolchildren were kidnapped by the Israeli occupation forces.

Two Palestinian minors have been tortured, abused, and medically neglected in Israeli custody, one of which after being shot at point-blank range when Israeli forces detained them for rock throwing earlier this month, a lawyer from the Palestinian Committee of Prisoners’ Affairs said Monday. The lawyer, Loay Akka, said that 17-year-old Mumen Tawfiq Hamayel and 16-year-old Abd al-FatahMubarek were both being held inside Israel’s Ofer prison.

The stark difference between Israeli and Arab schools on the same side of the separation barrier.

A 19-year-old Palestinian was injured in the neighborhood of al-Tuffah in the eastern part of Gaza city after a “suspicious object” exploded.

The Israeli occupation police arrested a female child in Bab al –Amud area of east Jerusalem, with no reason. http://english.palinfo.com/site/pages/details.aspx?itemid=80164

The occupation forces arrested 14-year old Akram Hassouneh and 14-year old Badee’ Gheith after raiding their home in the neighborhood of Al-Thori in Silwan.

Nablus clashes culminate in abduction of child by Israeli soldiers.