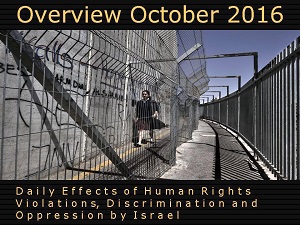 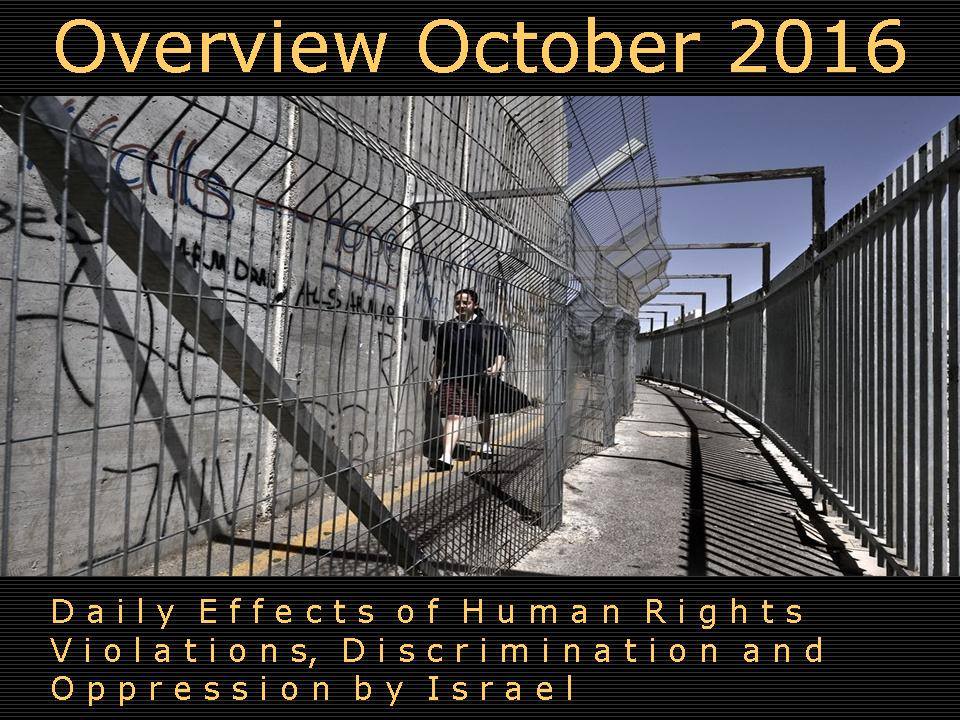 In the month of October 2016  Staat van Beleg could list 627 human rights violations (and 148 reports/analyses).

Every month we are trying to highlight another aspect of the occupation of Palestine. This month we would like to focus on different restrictions, and the general atmosphere in which they occur.

First we would like to list some recent actions undertaken by the Israeli government and other players. They show the broader framework that makes it clear why so many “smaller” abuses against Palestinians go virtually unnoticed and unpunished. Freedom of movement and freedom of speech have been under attack for a very long time, and the current government doesn’t seem to be willing to change that. The examples below are from October only!

Hagai El-Ad, director general of the Israeli Human Rights Organization B’Tselem, faced an attack by politicians and right wing groups because of his speech about the occupation before the UN Security Council. He received death threats and some suggested he should have his Israeli citizenship revoked. The organization itself came also under attack by the government, threatening to hurt them financially. Luckily many individual donors showed solidarity, but we will have to wait if that will be enough for them to continue their important work (Following attacks, B’Tselem donations increase tenfold).

Justice Minister Ayelet Shaked is trying to frustrate the work of Amnesty International Israel with fiscal punishment. This will also have an impact on other NGOs (Justice Minister Calls for Bill to Nix Tax Breaks for NGOs ‘Working Against Israel Abroad’).

UNESCO has also come under attack. A resolution concerning the ongoing Israeli agression on holy places in East-Jerusalem, and the fact that it was repeated that this is a place of great importance to Muslims, Christians, and Jews alike, was not well received. East-Jerusalem is occupied territory, but that didn’t stop PM Netanyahu from supporting an “archeology project” by a right wing group of settlers (Netanyahu announces funding of right-wing archaeological project following UNESCO vote). On top of that, over the years many hardliners among the religious settlers have infiltrated the military and the police force. This will have an effect on the situation in Israel and in the Occupied Territories, many fear (Israel: Settlers’ takeover of security posts ‘alarming’).

In a recent interview, Minister of Defense Lieberman stated that another conflict with Hamas in the Gazastrip “would be their last”. This is an extremely scary statement for the two million emprisoned people in the strip, who are suffering from the blokkade for ten years already (A Palestinian paper interviewed an Israeli minister, and now it could be banned in Gaza).

As we have seen many times in the past, Israel tries to legalize suppression of dissent. A new bill concerning the immoral practice of administrative detention would make it easier to send critical voices in Israel to prison without charge (Bill Would Give Defense Minister Broad Powers Against Israelis Deemed ‘Public Safety’ Threat). 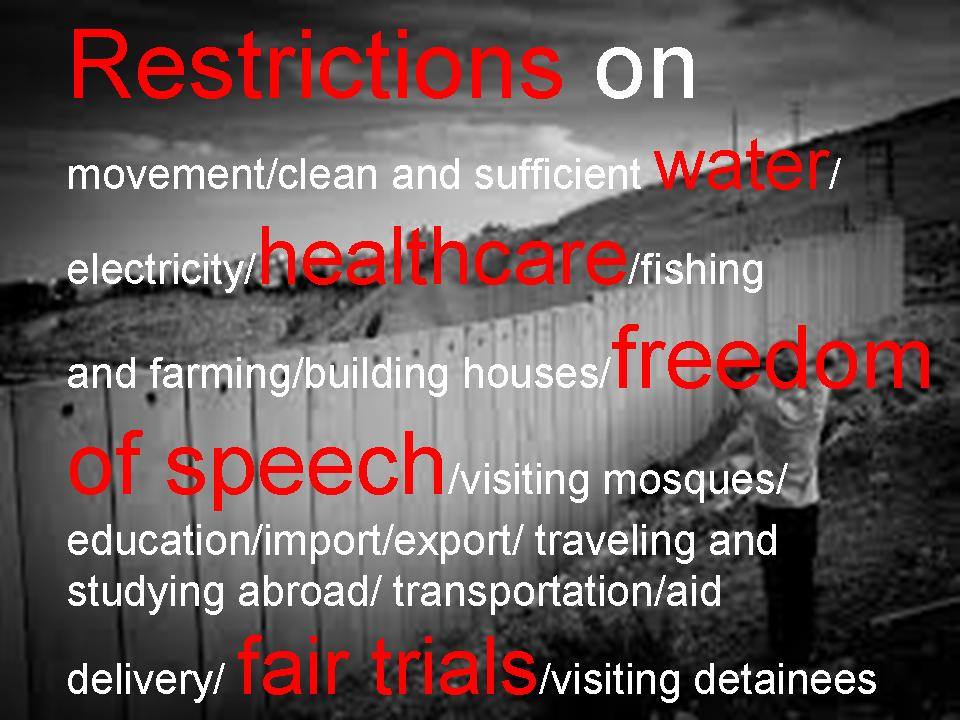 A few examples out of a very long list.

Every year the Palestinians fear the violence of settlers and soldiers during the olive harvest. Harrassment, access to their land denied, attacks with stones and guns, sometimes resulting in the death of a farmer, that’s what they face every single year (The West Bank Olive Harvest, In Light of Settler Attacks).

Because of the destruction of the infrastructure of the Gazastrip, and of hospitals and other medical facilities, many sick people can’t be treated in Gaza. Some are not allowed to leave, for others the complicated administration involved is too difficult to deal with. Even cancer patients can’t get proper treatment (Israel paints fighter jet pink to raise breast cancer awareness while preventing cancer patients in Gaza from receiving treatment).

Even Palestinian school children can’t be sure to reach their schools. They have to deal with aggressive settlers and even with the Israeli border police and military, who try to prevent them from getting proper education. Often these children depend on international activists to protect them. Settlers and soldiers don’t risk punishment, whereas Palestinian children can get long jail sentences on the accusation of having thrown a rock. The video in the article shows how soldiers are throwing stones at the children. It’s hard to see how that could be a military necessity (Video: Israeli soldiers throw stones at Palestinian children).

The town of Umm al-Raihan, south of Jenin, is completely isolated because of the Separation Wall. Earlier in October Israel forces prevented 50 students and 8 teachers to reach their school.They locked the iron gate and kept them all waiting for two hours (IOF detains 50 students, 8 teachers for two hours).

On monday October 31st, the occupation army stormed Ras Al-Amoud, in Silwan, and broke into a Palestinian school, triggering a state of panic among students and teaching staff. The IOF soldiers showered the school with random barrages of rubber bullets and sound bombs (Israeli soldiers target Jerusalem schoolchildren with rubber bullets).