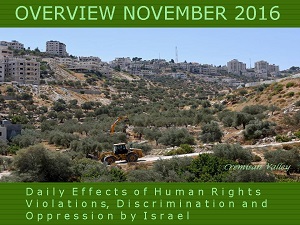 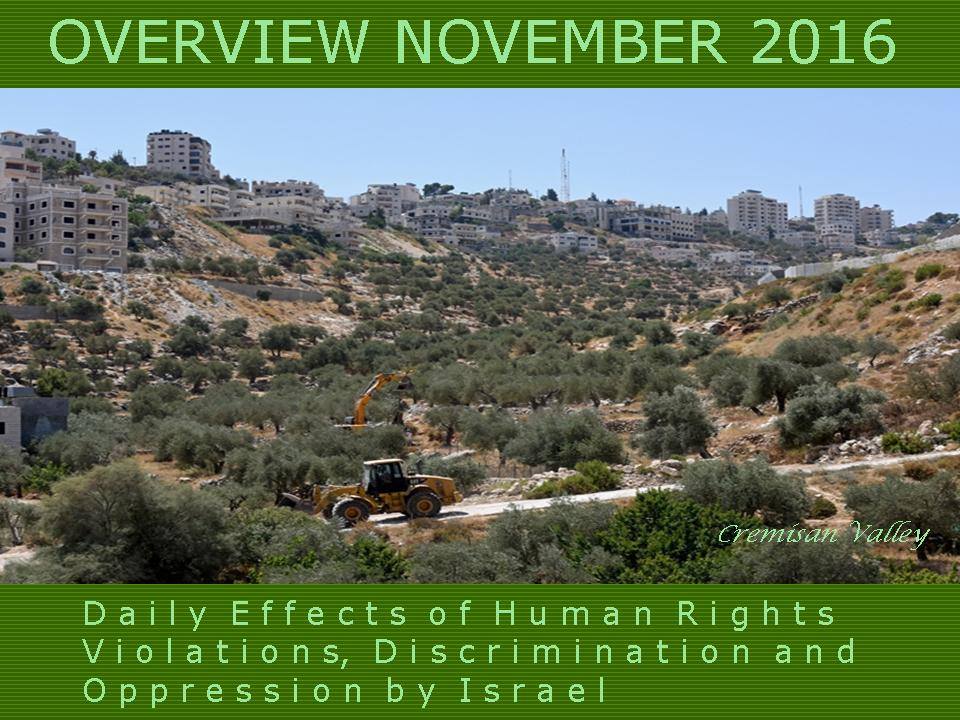 In the month of November 2016 Staat van Beleg could list 687 human rights violations (and 150 reports/analyses).

Every month we are trying to highlight another aspect of the occupation of Palestine. This month we would like to focus on Israeli settlements policies.

Among the ongoing demolishing of Palestinian properties and the land grabs for settlement expansions we are seeing some worrying developments arising from the political arena.
The Israeli newspaper Kol Ha’ir has revealed that the Israeli government intends to build more than 30,000 housing units in east Jerusalem after US president-elect Donald Trump is sworn into office in January 2017. According to the new Israeli plans, 15,000 housing units will be built in place of the Jerusalem-Qalandiya airport, and other thousands will be in the industrial zone of Qalandiya (Atarot) and hundreds in Ramot and Gilo settlements. These settlement plans had been frozen over the last two years because of pressures by the international community and the outgoing US administration. But now the construction plans will be passed on for approval by the Israeli competent authorities. https://english.palinfo.com/news/2016/11/19/israel-to-build-thousands-of-housing-units-after-trump-s-swearing-in

At the same time Israel has approved a controversial draft bill aimed at authorizing Jewish settlements that were built on private Palestinian land in the occupied West Bank without Israeli government permission. The bill must now pass through three readings in parliament and also be ratified by the Supreme Court before it can become law. The new law would also open the way to legalize outposts like Amona, near the West Bank city of Ramallah that was built on land privately owned by Palestinians. The Supreme Court had ordered the evacuation of settlers from Amona and the demolition of their homes by December 25. (http://www.aljazeera.com/news/2016/11/israeli-committee-approves-bill-legalising-outposts-161114042637773.html)

With this new policies many settlement projects that were on hold because of pressure from the international community and the lack of sufficient legal protection will be given a green light.
We cannot name all the Palestinian towns, villages and agricultural lands that are under threat by Israeli settlement expansion neither the individual cases of demolition orders but we will give an impression of how an extension of the separation wall affect the lives of an entire Palestinian community.

In an article of al-Jazeera from 4 november http://www.aljazeera.com/news/2016/10/palestinians-mourn-final-cremisan-valley-olive-harvest-161031094433899.html we read that the farmers of Beit Jala will soon be blocked off from their olive fields in the Cremisan valley because of an extension of Israel’s separation wall. The Cremisan Valley is a stretch of fertile land on the border between the West Bank and Jerusalem. It is home to a Salesian monastery, a convent and convent school, and a well-known winery. It constitutes one of the last green areas in the Jerusalem area, with large tracts of agricultural and recreational lands. 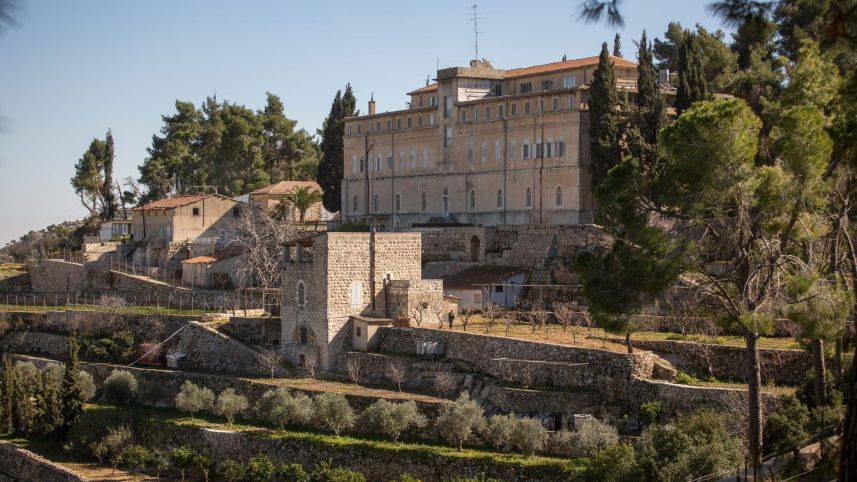 About a dozen families went through a nine-year legal battle with the Israeli government in the hope of keeping their land. In April of last year, an Israeli high court ruled in favor of the petition by Beit Jala residents – but nine months later, an appeal was brought forth, and the court reinstated the original route of the separation wall, annexing the valley. Some 3,500 dunams of farmland belonging to 58 Palestinians will fall on the Israeli side of the wall. (A dunam is .247 of an acre, or 1,000 square meters.) Palestinians claim the land is being confiscated for the expansion of the neighboring Israeli settlements of Gilo and Har Gilo.

Here you can read more about the battle against the extension of the wall:
https://www.ncronline.org/blogs/ncr-today/land-grab-cremisan-valley
http://www.poica.org/details.php?Article=9008