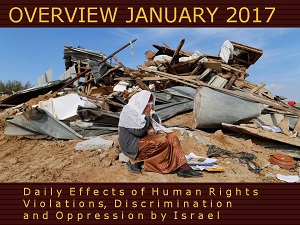 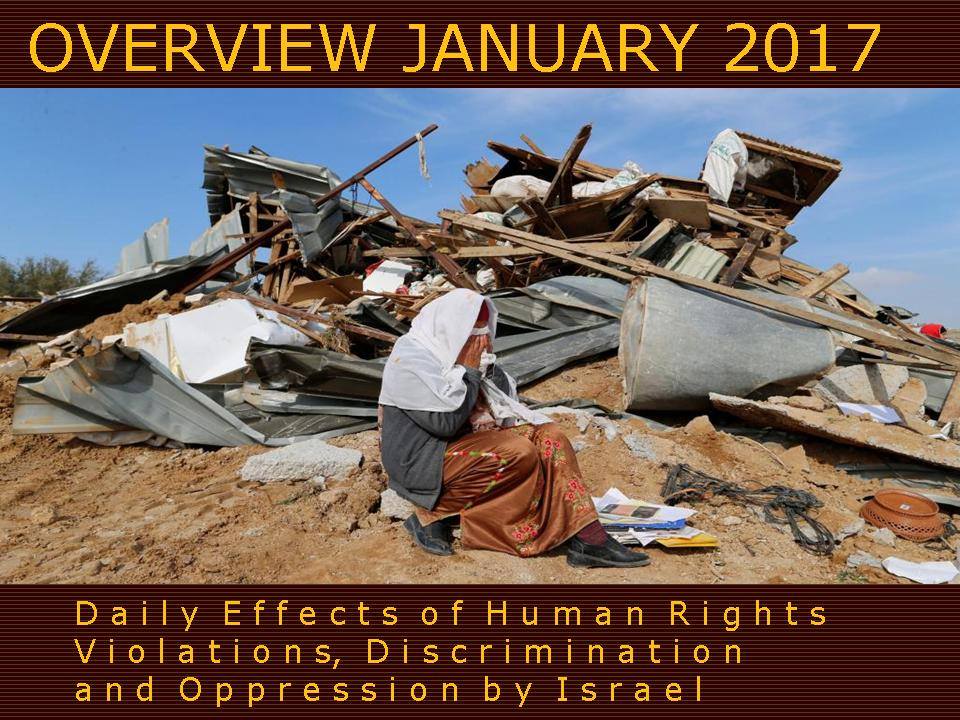 In the month of January 2017 Staat van Beleg could list 837 human rights violations (and 174 reports/analyses).

The violations on Palestinians, their land and their properties are increasing in numbers and are becoming more ugly day by day. Reporting violations and publishing them is as important as to keep an eye on how the international community, politicians and media are dealing with the ongoing occupation of Palestine.

Palestine in the age of Trump

We clearly recognized an increase in violations in the run-up to the inauguration of US President Donald Trump. Mainly we see a rise in annexing of Palestinian land, demolition of Palestinian houses,  bulldozing entire Bedouin villages, leveling of agricultural land and the approval on structure plans or expansion of illegal Israeli settlements. At the same time settler violence is growing, expelling Palestinians from their lands and properties.

In this article Rashid Khalidi gives an impression on what we can expect from a Palestine in the age of Trump.

Here we can read how meetings are being prepared, a day after the inauguration of Trump, to discuss the relocation of  the US Embassy to Jerusalem.

And here we can see what to expect from Netanyahu on future peace talks. He stresses that the Paris conference moves peace backward, adding that Israel is not bound by any decisions that will be made at the conference.

UN resolution 2334 not a symbol but regulation

On 23 December during the UN Security Council resolution 2334 was adopted to halt  illegal Israeli settlements. We noticed some signals that this resolution will not have a direct impact on the Israeli settlement policies and will just be used by the international community as a symbol of disapproval. Although we know that UN resolution 2334 is grounded in the conventions of the UN-membership, which states that member states must accept the decisions of the Security Council, we still have to see if this will really happen. We already saw that Israel is ignoring the resolution and is continuing with its settlement policies in a furious pace. Currently Netanyahu is approving thousands construction permits for buildings in illegal Israeli settlements. And this may be some more.

At the time of writing we did not see any international pressure on the basis of resolution 2334 on these plans and building permits, although we do see pressure coming up from the Palestinian side. Currently a program is being prepared by ‘The Palestinians in Europe Conference’ for seven events which will take place in Europe starting this February where also an event will be held on “Upholding the land and rights”.

At the same time ‘The Palestine Liberation Organization (PLO)’ is organizing an  international conference in Brussels for March against Israeli settlement activities in occupied Palestine.

In this special focus on Palestine at the UN from the Institute for Palestine studies you can find some links to publications about the UN policy towards Palestine over the years.

Five of Europe’s largest Pension Funds are investing billions in companies related to the illegal Israeli settlements in Palestine. This is against UN guidelines, but there is little political uproar although millions of Palestinians are affected.

The importance of the media

Media coverage is playing an important role in the Palestinian occupation. Staat van Beleg could report almost 7000 human rights violations on the Palestinian people in 2016. How many of these violations were being shared with us by the mainstream media? We can tell you, not much!  In 2016 we reported 150 Palestinian victims. It’s truly  shameful how the mainstream media failed to report about these victims. Also the way incidents are being described in general is often biased and incomplete.

A good example is the incident that took place on 8 January in Jerusalem when a Palestinian man drove his truck into a group of Israeli soldiers and four of them died.
Immediately after the incident the mainstream media copied the report of Haaretz in which a terrorist attack was mentioned and even without any reference or evidence IS showed up.  The following day Israeli spokesperson Mickey Rosenfeld debunked the IS claim.

Reporting is also being used selectively by the mainstream media. A good example are the critical notes of Gideon Levy en Amira Hass from Haaretz which are barely being used by the mainstream media.
More and more we see the sentence: “an Israeli army spokesperson said they were looking into reports” showing up in the local media.  Rarely we read something of the results of these investigations. Things are being swept under the carpet simply because they can get away with it.

A critical note on the incident from the in Belgium residing Lebanese writer and activist Dyab Abou Jahjah even resulted in losing his weekly column at The Correspondent.
While Palestinian victims are barely mentioned in the mainstream media this incident was being exploited and sentiments broke every boundary. We saw the Israeli flag flying at half mast on the city hall in Rotterdam and the Brandenburg gate in Berlin and the city hall in Paris was lit with the Israeli flag

Another example is the media coverage for the series on Dutch television broadcasted by the ‘Evangelische Omroep’ named ‘The Canary in the Coalmine’ where Hanneke Groenteman was on the road looking for anti-Semitism. It is noteworthy that talk shows and media gave a lot of attention to the series. While Groenteman was looking for victims of anti-Semitism, almost in vain, a movie about an ambulance service at the time of the Israeli attack on Gaza in 2014 was being broadcasted in prime time. Although we were dealing with real victims here the movie was completely ignored by the media.

Finally we would like to mention the remarkable incident where the already discredited  Abou Jahjah was being invited by the ‘Evangelische Omroep’ in the Christian talk show ‘De Tafel van Tijs’. He was asked to debate with Ruud Koopmans, the man of “fifty million muslims” who “accept violence” but at the last moment he was canceled.

These were just some examples of how politicians and media are dealing with the Palestinian occupation. Later we will separately pay attention to the Israeli lobby which is so persistently intertwined with politics and the media worldwide.