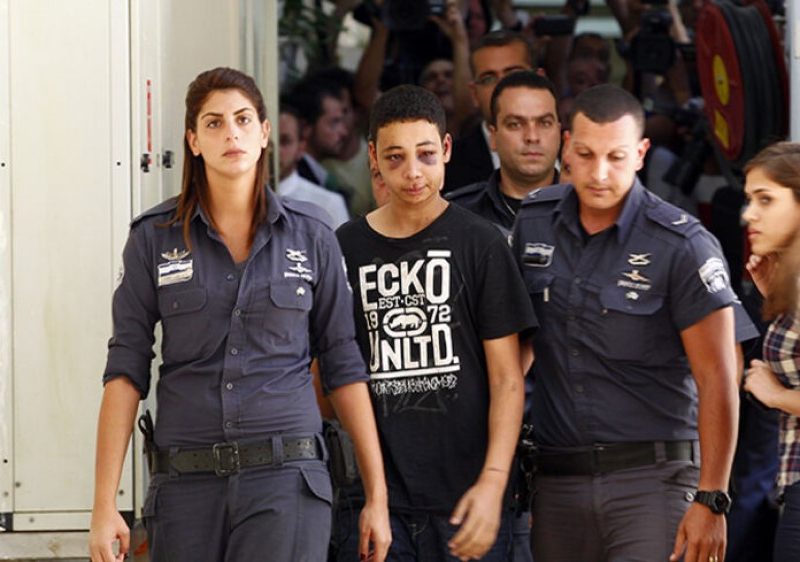 In the month of  October 2017 Staat van Beleg could list 764 human rights violations and 157 reports.

Every month we are highlighting another aspect of the occupation of Palestine. This month we would like to raise awareness about apartheid within the justice system.

There are currently 65 Israeli laws that discriminate directly and indirectly against Palestinian citizens in the Occupied Palestinian Territories, making inequality and racism institutionalized. There are 4.5 million Palestinians who live under an Israeli military regime in the West Bank and Gaza Strip. The 650.000 Israeli settlers living in the West Bank benefit from Israeli civil law, even though their presence is illegal under international law and in direct violation of article 49 of the Fourth Geneva Convention. Under the two legal systems, an Israeli settler and a Palestinian, accused of the same crime, will be treated and sentenced very differently.

These are the most important differences:

There is a wide discrepancy between Israeli citizens and Palestinians regarding conviction rates. Israel’s kangaroo courts system has a staggering 99.7% conviction rate for Palestinians. Human rights group Yesh Din found that between 2005 and 2015, 85% of the cases of settler crimes against Palestinians in the West Bank remained unresolved. This rose to 96% for damage and destruction to Palestinian trees and crops.

Another practice that is commonly reserved for Palestinians is torture, both physical as psychological. Israel’s Shin Bet secret police uses abusive techniques amounting to torture in an apparent attempt to extract a confession. Even children are not spared from this. It was publicly admitted that Shin Bet was using “exceptional measures” during its interrogations. While torture is routinely used against Palestinian detainees, rights group B’Tselem called it a “rarity in interrogating Jewish suspects.” B’Tselem has condemned the abuse and torture of the detainees, arguing that forced confessions will not serve to protect Palestinians from frequent settler attacks that systematically go unpunished.

The violation of human rights continues for Palestinians held in Israeli prisons.

The list goes on and on with all kinds of abuse and torture.

Examples of the punishment of Israeli criminals, or the lack thereof

Abd al-Fattah Yusri al-Sharif and Ramzi Aziz al-Qasrawi, both 21, were shot dead by Israeli soldiers in March last year. The Israeli government accused them of stabbing and moderately wounding a soldier in Hebron. Israeli soldier Elor Azaria, was caught on camera shooting al-Sharif in the head as he lay badly wounded and completely subdued on the ground. During the trial, Azaria was offered support from the highest political levels, with Prime Minister Netanyahu calling for him to be pardoned altogether. In February this year Azaria was sentenced to a derisory 18 months in prison.

If Palestinian lives mattered in Israel, Azaria would have been given life in prison. Instead he got a slap on the wrist. His sentence is already been reduced on military order to 14 months. Most likely it will be reduced for another 6 months for good behavior, making the price for cold blooded murder on a Palestinian a mere 8 months in jail, with permission to go on furlough for holidays. This would be unthinkable for a Palestinian prisoner, even an innocent one.

As for the killing of Ramzi al-Qasrawi, this case was never given any attention since it was not caught on video. This proves that the trial of Elor Azarya was merely a charade for the media.

The terror attack on the Dawabsha family

On 31 July 2015, a firebomb was thrown into the Dawabsha family home, causing fatal injuries to 18-month-old Ali and critically injuring his parents, Saad and Riham, who later died from their injuries. Ali’s 4-year-old brother, Ahmad, was the only survivor.

Three settlers with a history of attacks on Palestinians were placed under administrative detention but not explicitly accused in the Dawabsha case. A month later, Israeli defense minister Moshe Yaalon admitted the army already knew who really had committed the lethal torching of the Dawabsha home but had not taken any legal action “in order to protect the identity of their sources.” Months later it was discovered that the suspects under gag order are Elisha Odess and Hanoch Ganiram, members of the most extremist settler faction, the Hilltop Youth. The grandfather of the latter, Yithzak Ganiram, was a member of the extremist terror group Jewish Underground and was convicted to less then 7 years in prison for attempted murder and manslaughter. After serving a quarter of his sentence he was transferred to a ‘Yeshiva’, a religious intitute for learning, getting preferential treatment.

The killing of a Palestinian protester

In May this year, an Israeli settler shot and killed Mutaz Shamsa, a 23 year old Palestinian man in the occupied West Bank. The settler had opened fire at a group of protesters expressing their solidarity with the hunger strike of Palestinian prisoners. An AP photographer was also hit and injured. When the killer fled the scene in his car, he ran over several other Palestinians and crashed into a Red Crescent ambulance. He then got out and opened fire again. Israeli forces already present at the scene did not detain the killer. Israeli police stated immediately that the settler was not considered a criminal suspect. In a videotaped statement the killer claimed that he came under attack by protesters and fired his gun in self defense. He even filed a complaint against the protesters. The police distributed his statement to the media and came to his defense. Far-right Israeli minister Naftali Bennett praised the settlers actions.

The UN and the Associated Press called for a full investigation and prosecution, but to no avail.

The burning down of a school

The brothers Nahman and Shlomo Twito, who burned down a bilingual Arab-Jewish school, were sentenced to respectively 2,5 and 2 years imprisonment. The two left the courtroom smiling, singing songs in praise of God and claiming that “it was worth it.”

When Palestinians are punished

The 18-year-old journalism student Lina Khattab has spent almost 7 months in Israeli detention for protesting against Israel’s system of injustice. Lina was accused of participating in an illegal demonstration and throwing stones at Israeli soldiers. Lina denied all of the charges. Although the interrogation session was recorded, Lina was forced to sign a paper in Hebrew, a language she cannot read.

According to Israeli military law, the maximum penalty for throwing rocks according to Article 212 of Military Order 1651 is 20(!) years imprisonment.

Lina had 11 hearings in Ofer military court, almost all of which were to extend her detention and delay the trial, denying her right to a speedy trial. During the witness hearing, the court discovered that the three witnesses (Israeli soldiers) had coordinated their testimonies, in violation of the judicial process. Therefore, the judge and the prosecutor settled with a plea bargain. Lina was sentenced to a 6 month prison sentence, a fine of 6,000 NIS (about 1,500 USD) and a 6 month suspended sentence for 6 years. While the coordinated testimonies of the soldiers ultimately changed the outcome of the trial, it is clear that Lina was considered “guilty until proven innocent.”

Israel’s high court has backed the government’s policy of demolishing the family homes of those accused of perpetrating acts that Israel defines as terrorism. (Which is a very wide definition.) Such punitive demolitions are war crimes under international law. When the perpetrators are Jewish however, their families are shielded from the same fate.

On 4 July this year, the high court rejected a petition by the parents of Muhammad Abu Khudair to demolish the homes of the three Israelis convicted of the brutal killing of their teenage son. While rejecting the Abu Khudair petition, the court reaffirmed the state’s right to demolish the homes of (the families of) Palestinian attackers, reinforcing the double standard.

When it comes to the construction of homes, the Palestinians are again being discriminated. Israeli settlers get away with illegal construction, whilst Palestinians require a permit to build on their own land, which is almost never granted.

If all this isn’t apartheid, then what is?