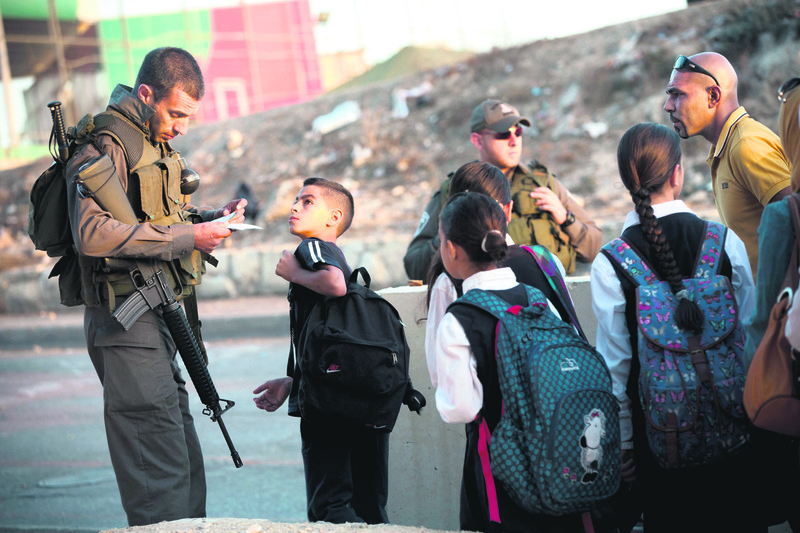 In this first month of 2018 Staat van Beleg could list 879 human rights violations (and 176 reports/analyses). (see our archive)

Every month we are highlighting another aspect of the occupation of Palestine. This month we write about the most vulnerable victims of the Israeli occupation: Children.

You are living in an occupied country and the occupier fails in its obligation to protect you and your children. Worse still, it not only fails in protecting its occupied citizens, it even endangers their lives. When the occupier can not guarantee the protection of your children and you are not able or allowed to exercise your parental responsibilities to guarantee the safety and well being of your children where to turn to?  At this point international law comes to mind: the International Convention of the Rights of the Child.

The International Convention of the Rights of the Child

The International Convention on the Rights of the Child (hereinafter “the Convention”)  is the most extensive and important international document on children’s rights to date. The Convention was adopted on 20 November 1989 and entered into force on 2 September 1990.  The Convention deals with the child-specific needs and rights. It requires that the “nations that ratify this convention are bound to it by international law”. Ratifying states must act in the best interests of the child. In all jurisdictions implementing the Convention requires compliance with child custody and guardianship laws as that every child has basic rights, including the right to life, to their own name and identity, to be raised by their parents within a family or cultural grouping, and to have a relationship with both parents, even if they are separated. Article 19 of the Convention states that state parties must “take all appropriate legislative, administrative, social and educational measures to protect the child from all forms of physical or mental violence”. Currently 196 countries are parties to the treaty (some with stated reservations or interpretations). This includes every member of the United Nations (except the United States).

Israel and the Convention

The Convention was signed by the State of Israel on 3 July 1990, ratified by the Knesset on August 4, 1991, and went into effect on November 2, 1991. This does not, however, make it part of Israeli law. Government ratification obligates the state to obey the Convention’s directives, including making the laws of the state compatible with them. Implementing the Convention’s directives in legislation is the basis of the Committee’s appointment, and is its central objective!  At the same time, since the Convention is not part of Israeli law, it is not possible to enforce most of its directives directly in the courts. Such enforcement is possible only if the directives are anchored as law. The Israeli government argues that the international conventions relating to occupied land do not apply to the Palestinian territories because they were not under the legitimate sovereignty of any state when they were captured during the 1967 Middle East war. This actually means that the Convention can be cited in courts arbitrarily.

In 2010, UNICEF criticized Israel for its failure to create a government-appointed commission on children’s rights or to adopt a national children’s rights strategy or program in order to implement various Israeli laws addressing children’s rights. The report criticizes Israel for holding that the Convention does not apply in the West Bank and for defining as Palestinians under the age of 16 in the occupied territories as children, even though Israeli law defines a child as being under 18, in line with the Convention.

A UK government-backed report of 2012 has accused Israel’s security forces of regularly breaching the UN Convention on the Rights of the Child (UNCRC).

We will have a look now at three examples where the Convention should step in but shamefully couldn’t make it to the arena of the cruel Israeli occupation and juridical Apartheid policies.

The whole world is currently focused on the case of Ahed Tamimi but let’s not forget that one of Ahed’s spearheads of resistance is setting the circa 350 child prisoners that are currently held in Israeli prisoners free.

In our publication of October 2017 we already spoke about the Israeli Apartheid within the justice system.

Criminal liability begins at age 12 for both Palestinians and Israelis. However, Palestinians under the military court system are tried as adults at age 14, while the Israeli justice system sets the age of majority at 18. Israeli law orders that children should only be interrogated by police officers specially trained for the task, but Palestinian children are interrogated by regular police officers without lawyers or family members present, in situations that are intimidating and abusive. Children are deprived from family visits and are denied proper medical care. Israel is the only country in the world that systematically tries children in military court. At least 700 children are tried every year.

In this article of Jadaliya it is explained how the detention of Palestinian children has an impact on their education and development. It explores children’s experiences in detention, and how these impact on subsequent life chances. It also looks at child responses to the continued occupation by Israel. This is done in the context of the Israeli occupation of Palestine and Israeli violations of international law.

Some factors make that Palestinian education cannot comply with international law. We are not talking about the quality of Palestinian education since this is of a high standard but we are talking about the rights for a child to be educated in an environment that is protected from violence and where freedom of speech, thought and expression is respected. Another factor is the accessibility of schools  and the constant fear of school demolitions. We are talking about the impossibility for many students to study abroad. We also have to mention the cases where schoolchildren were being executed on their way to school or back home in incidents known as ‘alleged stabbing attacks’.

Palestinian kindergartens, primary schools, high schools and universities are being raided on a regularly basis by Israeli forces. During these raids the forces make use of teargas, stun grenades and even rubber-coated steel bullets which causes injuries and fear among scholars and sometimes even resulted in death. That these cases are frequently occurring is seen in the table below where the raids of December 2017 are mentioned. It underlines the impossibility for Palestinian children to follow their education in a safe and peaceful environment.

In 2017 Staat van Beleg could report 12 cases of children under the age of 18 that died as a result of medical neglect. Children were denied passage through checkpoints or borders to reach a hospital in time. The most recent case is that of the five-day old baby Hadia Mohammad Abu Hilal that died in the intensive care unit of the Al-Hilal Emirati Hospital in Gaza on 16 january 2018. The infant died because of the lack of special medication required for the respiratory machine to function properly.

On 31 December 2017 the nine-year old Palestinian Girl Dalal Lawlah from Awarta in Nablus died after Israeli soldiers at the Huwara checkpoint obstructed her transfer to hospital.

Before baby Hadia passed away on 16 January the Ministry of Health in Gaza already rang the alarm bells on the dire healthcare situation. On 3 January the ministry reported that shelves were almost empty, as hundreds of medicines ran out months ago.  “The Israeli occupation put strict conditions on the passage of medicines, the medical equipment and medical disposals.” On that same day the Guardian published an article about a warning of the World Health Organization that hospitals in Gaza will face an almost total power blackout by the end of February unless funding is secured to keep emergency generators running.  The idea medication that could have saved Hadia’s life was denied passage at the borders of Gaza is intolerable!

These were just some examples of how the occupation affects children’s lives but we have to realize that in all aspects of Palestinian lives under occupation children are double victimized. They do not only suffer under the daily restrictions and violence but on top of this they are totally deprived from a safe environment where they can feel protected and where they can play and develop their skills.

We would like to end with some words of Ahed Tamimi from an interview by Abby Martin: “At any time I can expect a soldier coming towards me to shoot me and kill me, this feeling affects us permanently”. Her words are not exaggerated. In 2017 40* children under the age of 18 died as a result of the Israeli occupation.