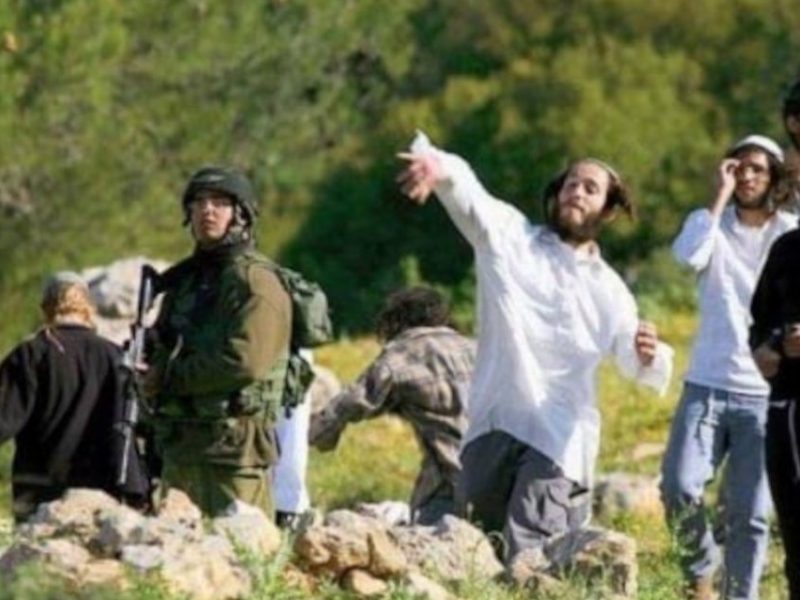 In the month of February 2018 Staat van Beleg could list 766 human rights violations (and 171 reports/analyses).

Every month we are highlighting another aspect of the occupation of Palestine. This month we will focus on Israeli settler violence.

Settler attacks against Palestinians have been stepped up recently, including the storming of Palestinian towns and performing Talmudic rituals in Islamic shrines, spray painting racist slogans on cars and houses, destroying agricultural lands, uprooting olive trees and crops and physical attacks on Palestinians themselves.

Nearly 700,000 Israelis live in illegal settlements across the occupied West Bank in violation of international law.

A day in Palestine

On the 12th of February we read about several cases of collective punishment due to alleged stone throwing incidents against Israeli forces and settlers. No injuries among Israeli’s were mentioned. On that same day we read about incidents of settler violence without any intervention or punishment from Israeli side. The 12th of February is a good example to showcase a day of settler violence and collective punishment in Palestine.

The world upside down

The 18th of February we read the following headline: “Israeli Colonizers Injure Young Man In Jerusalem; Court Punishes Him And Two Who Treated Him”.  For a brief moment we thought settler violence would finally be punished, but this was not the case. Not the settlers would get their punishment but the injured Palestinian Maysoon al-Moghrabi and two young men who provided him the urgently needed first aid. The police summoned al-Moghrabi for interrogation and forced him under house arrest until his court session. The wounded young man is now facing charges that include “assaulting settlers”, although he was attacked by them while leaving the mosque. The two young men, Osama Halhouli and Mohammad Awad, who provided Mustafa with first aid, were transferred to Haifa under a five-day exclusion order denying them entry to Jerusalem, until a judge deliberates in their case.

We don’t see any (collective) punishment regarding these cases of settler violence. It is even worse, because violence and intimidation by settlers are protected by Israeli forces and the Israeli authorities.

In late December 2017, Yesh Din published its annual data sheet on law enforcement on Israeli civilians suspected of ideologically motivated crime against Palestinians in the West Bank. The figures presented in the data sheet are based on Yesh Din’s monitoring of over 1,200 investigations opened since 2005 by the ‘Judea and Samaria police’, the Israel police district in charge of the West Bank, following complaints filed by Palestinian victims of crime. The data shows that only 3% of investigations of ideologically motivated crime against Palestinians have resulted in a conviction. In addition, only 8.1% of the investigation files monitored by Yesh Din during this period (94 of 1163 concluded files) have led to indictments.

The PLO’s Committee for Prisoners and Freed Prisoners revealed that the Israeli authorities pay stipends to Jewish settlers indicted of crimes against Palestinians. Israel has complained frequently about payments to the families of Palestinian prisoners by the Palestinian Authority, claiming that they “encourage terrorism”. Ninety-nine per cent of Israeli Jews who were imprisoned after killing Palestinians were released and received legal and social support, as well as full protection by successive Israeli governments.

A month of settler violence

In our archive settler violence is archived under the category “Intimidation/Violence/Destruction/Legal issues”. This month we could file 216 cases in this category including 50 cases of settler violence. To give an idea of one month of settler violence we named all the cases of February by date. We have to mention that these are only the incidents that reached the media.