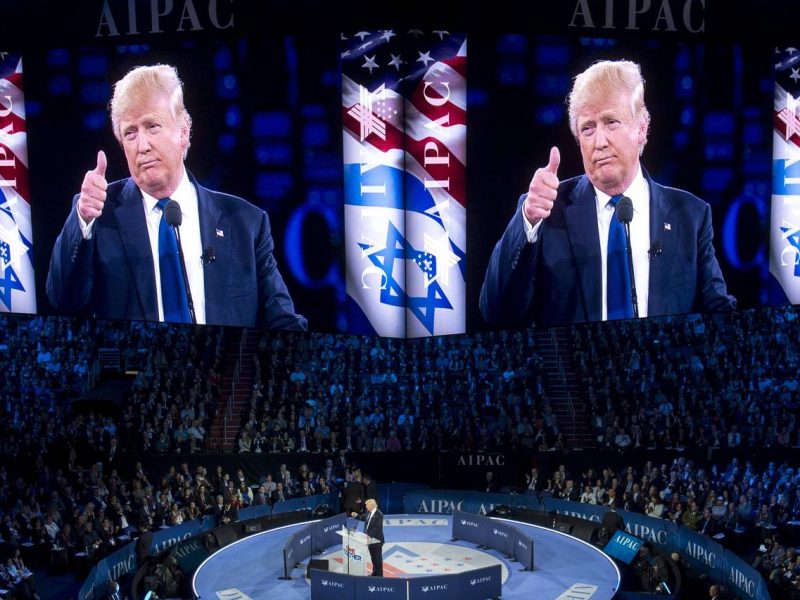 In the month of July 2018 Staat van Beleg could list 753 human rights violations and 177 reports. (see our archive) This month we focus on the Israel lobby.

When we talk about the ‘Israel lobby’, what are we really referring to? Even today, the mere mention of a ‘Jewish lobby’ or ‘Israel lobby’ will raise some eyebrows. The lobby is one of those things one knows exists for sure but to some people it still has a conspiratorial feel to it.

One of the common strategies employed by the Israel lobby is a well-known one, namely to label anyone who’s critical of Israel’s policies an anti-Semite. This artifice has been used so many times that by now it’s power should start to diminish somewhat. Still, getting branded as anti-Semitic can have far reaching consequences.

Israel lobby in the UK

As recent as 2017, Al Jazeera did an expose on the Israel lobby in the UK. It was aired in January 2018 and it showed how Israeli officials infiltrate British politics and how deep their interference goes. The goal of the lobby in the UK was made very clear: defame anyone who dares to criticize the state of Israel and its policies. After airing, complaints were made by pro-Israel activists and an Israeli embassy employee to Ofcom (a broadcast regulator) claiming it was anti-Semitic and biased. Fortunately, those allegations were thrown out.

One needs only to delve into the whole anti Corbyn movement at the present moment, to see how insidious the interference is. Corbyn, the leader of the Labour Party has been attacked and vilified by pro-Israel pressure groups since it became clear he had a real chance at becoming prime minister in the UK. Corbyn’s crime? Speaking out against the illegal settlements, the violence perpetrated against Palestinians on a daily basis and Israel’s general policy of discriminating and oppressing.

Israel lobby in the US

When Mearsheimer and Walt published their article ‘The Israel lobby and US foreign policy’ in 2006 (this would become a book later) the reactions were as expected. It became controversial and well known Israel apologists like Alan Dershowitz accused the writers of “anti-Semitic conspiracy theorizing”, among other things.

The premise of the article was clear cut, the Israel lobby interferes significantly in US foreign policy, specifically concerning the Middle East and it prioritizes Israel’s interests above the interests of the US.
The writers of the article focused primarily on the influence  the Neo Conservatives exerted on US foreign policy in the aftermath of 9/11.
They were the driving force behind the invasion of Iraq in 2003, and as it turns out, a lot of the ‘intelligence’ that served as an argument for said invasion, came directly from Israeli sources.

In the case of the US, the presence of pro-Israel pressure groups is blatantly obvious. The biggest and most well-known one being AIPAC (American Israel Public Affairs Committee). It’s a matter of public knowledge that every American politician or aspiring one goes through a vetting process and has to adopt a pro-Israel stance if he/she wants to have a real chance at a political career.
This highly influential lobby group actively campaigns to push American presidents into war against nations that are regarded enemies of Israel.
It’s essential to mention that politicians from both sides of the political spectrum go through the ‘AIPAC filter’. Although the average American has the erroneous idea that the bipartisan system offers them a real choice, after the latest election it seems a lot of people are waking up to the fact that the Democrats and the Republicans are really two sides of the same coin.

Two big names seem to come up a lot when one looks into the Israel lobby in the US. One is the billionaire media mogul Haim Saban and the other is billionaire business magnate Sheldon Adelson. Both are die-hard Zionists and big financiers when it comes to political parties, and they both are deeply involved in lobbying for Israel. They are the main forces behind the Israeli-American Council, which was established in 2007 for the Israeli expat community. While Saban was a big donor to the Clinton campaign during the last election, Adelson is a staunch supporter of the Republican party and was one of Donald Trump’s biggest supporters.

It does beg the question, what kind of choice does the American voter have when both of the presented options are sponsored and thus ideologically influenced by groups that have the same interests at heart?

Another big part of the Israel lobby in the US are the Evangelical Christians, who make up make up the biggest pro-Israel bloc in the US. One shouldn’t underestimate the power this demographic has.
Apparently, support for Israel is even bigger among  Evangelical Christians than it is even among American Jews. Although some of the reasons behind the support may be theological in nature, the way these huge groups of people influence Washington ends up yielding political gains for Israel either way.
It’s no wonder the congregations are so non critical of Israeli policies when the most influential Evangelical Christians in the country are constantly peddling Israeli propaganda.

Another aspect of the Israel lobby that’s undeniable is it’s omnipresence in the mainstream Media. Media coverage of the Middle East is predominantly biased in favor of Israel. When they report -which isn’t a given, because a lot of what happens in Palestine gets little or no coverage- the way they present the facts is predominantly from the Israeli viewpoint.
There’s a constant downplaying of war crimes committed by Israel. The general tone is apologetic of the violations committed by Israel against the Palestinians and the portrayal of Palestinians is stereotypical and with all the negative connotations that ensue from that.
In this case, we’re not just talking about US media, but western media in general. Studies have shown the lack of balance in reports on Palestine and the Middle East in general.

In recent years the Israel lobby has been using new tactics to promote pro-Israel propaganda, jumping on several bandwagons that contemporary societies are preoccupied with.
A few of those tactics are ‘pink washing’, ‘vegan washing’ and ‘green washing’. With a complete lack of shame, the Israeli propaganda machine peddles these topics as part of the Israeli mind set and culture. The idea is to evoke this image of the Israeli army and society as enlightened when it comes to these themes.

The IDF regularly boasts about their ‘vegan’ military, how compassionate they are, all the while ignoring the discrepancies that arise from serving in an occupying army.

The other tactic that may be better known to people is ‘pink washing’. This comprises the narrative that Israeli culture is the most LGBTQ friendly country in the region and therefor is “modern and tolerant”. The idea is to juxtapose this so-called tolerance to the alleged Arab intolerance towards homosexuality.
Israel makes good use of it, to cover up for their ongoing occupation and oppression of Palestine.
The pink washing hasn’t gone unnoticed and social justice groups are starting to counter the propaganda by showing the hypocrisy of the use of gay rights to continue the human rights abuses against Palestinians.

The Israel lobby in Europe

Although we’ve focused mainly on the Israel lobby in the US in this summary, that doesn’t mean they’re not actively engaged in meddling in the policies of other nations.
In 2004 a Jewish research institute, the Transatlantic Institute, was opened at the European Union. In their own words, they’ve declared it their aim to “strengthen the ties between the US and the countries of the European Union”. The Transatlantic Institute is affiliated to AIPAC and works toward EU funding of Israel. One of its achievements was the EU-Israel association agreement, which gives Israel free access to the European single market.

To wrap it up, we’ll leave the reader with one last and recent example of the influence of the Israel lobby in the Netherlands;

The newly appointed major of Amsterdam, Femke Halsema, declared after just one week in office, that twinning the city of Amsterdam with Tel Aviv would be a great idea, claiming Tel Aviv is a model city, especially when it comes to LGBTQ rights, which brings us back to the pinkwashing. According to reports, Halsema had a meeting with 15 Jewish administrators and other key figures of the Jewish community in Amsterdam. This with her being in office for less than a week.
It’s a peculiar stance considering Halsema used to head the political party ‘Groen Links’, the same party that vehemently opposed the proposal of twinning the cities back in 2015. In 2015 it never came to formalizing the twinning due in part to protests by Human Rights activists. One can only speculate about the reasoning behind Halsema’s fixation on establishing a bond between Amsterdam and Tel Aviv, but it’s striking how she seems to have political priorities that are mainly beneficial for Israel.