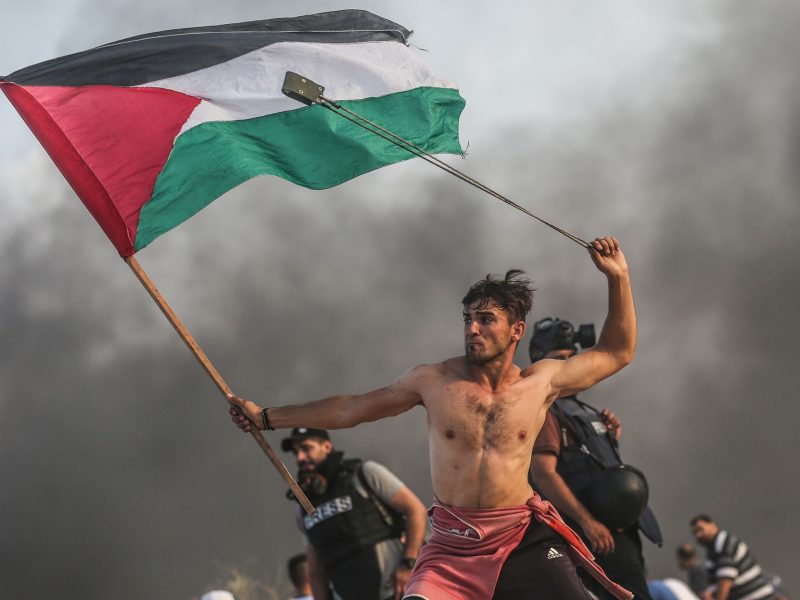 In the month of December 2018 Staat van Beleg was able to list 856 human rights violations and 179 reports/analyses.

This month we’re looking back at the year 2018.

The very first thing we want to address are the 362 Palestinians who lost their lives in 2018 due to Israeli violence and policy. For comparison, in 2017 this number was 153. In 70% of the cases they were shot directly by Israeli forces, mainly by snipers who shot Palestinian demonstrators in the border area of the Gaza Strip. Not only demonstrators were shot, but also first responders and journalists. The bloodiest day since the 2014 ‘war’ was on 14 May 2018. That day 62 Palestinians lost their lives.

In 20% of the cases they were due to Israeli airstrikes and other forms of military violence. In 7% of the cases they are a result of the Israeli occupation and restrictions, for example when life-saving medication isn’t allowed into the Gaza Strip. This is how in the first two months of 2018 six premature babies died. In the other cases the deaths were a result of settler violence and severe negligence in Israeli prisons. 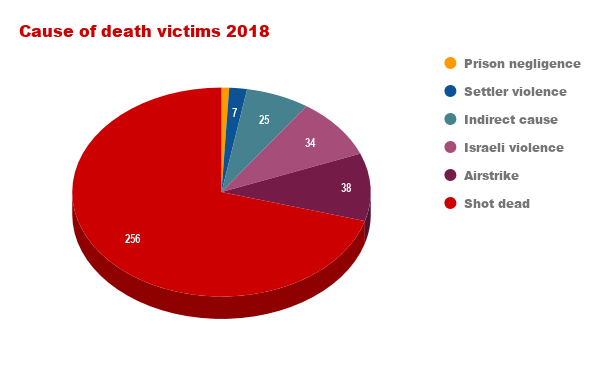 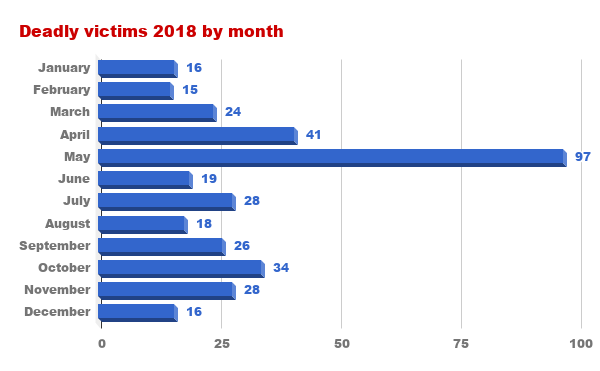 What’s barely changing through the years is that so most victims of Israeli violence are children and youngsters. In 49% of the cases the age of the victim is below 24 years. When we add the young adults to that, the percentage shoots up to 75% with a total amount of 271 deadly victims. In 19 cases the involved children were under 11 years. The reason was in most cases indirect, caused by the Israeli occupation and its brutal restrictions, but in some cases there was direct violence as well. There was this case on 7 December when a 4-year-old became victim of Israeli gunfire. He died four days later due to his wounds. On the deadly day of 14 May an 8-month-old baby girl died due to teargas inhalation, which was fired abundantly and careless by Israeli soldiers along the Gazan border. 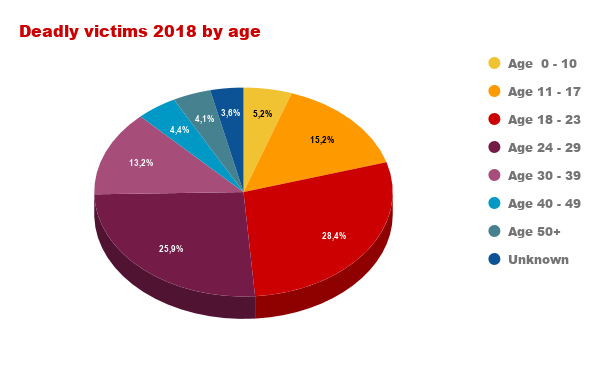 For a better understanding of the situation we must explain that the protesters in the Great Return March, which takes place on every Friday since 30 March, are in no way a threat to the Israeli soldiers stationed behind the miles long border fence in Israel. Usually thousands of peaceful Palestinians come together in the border area. The young, the old, men and women. There is dancing, singing, food is being prepared and cultural activities organized. The weekly protests are above all an exhibit of peaceful resistance. Of course there are also youngsters who risk their lives by coming close to the fence. The youngsters who dare to thrown a stone towards the soldiers or use a slingshot to return the still smoking teargas canisters back to the soldiers who just shot them. The effect of these actions are not hard to guess. Against well equipped Israeli soldiers, lying in an ambush at safe distance or in tanks, a youngster with a slingshot is no match at all.

The nature of these violations variate from destroying Palestinian property and burning down orchards to physical violence and shootings.In seven cases death was the result.

The cause of this increase is twofold. On the one hand there’s the fact that the violence committed by Israeli settlers on Palestinians in almost all cases remains unpunished. On the other hand the settlers are being encouraged by prominent figures. For example, last December the extremist right wing Israeli Member of Knesset Bezalel Smotrich has called for illegal Jewish settlers to attack Palestinians, asserting that the lives of Jews are more valuable than those of Palestinians. Within 24 hours 25 attacks were carried out by settlers against Palestinians. 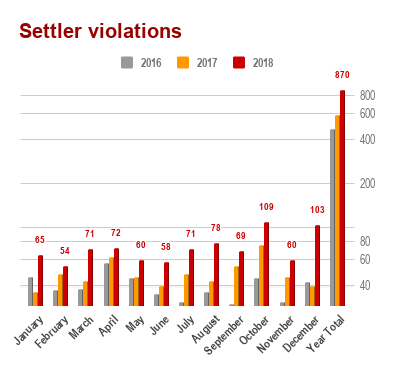 In 2018 the total amount of human rights violations was 9572. That’s 669 more than in 2017. For a big part these violations consist of raids, arrests and kidnappings. Among others, the cases where mostly young Palestinians pulled out of their beds in the middle of the night and taken away, often paired with violence, on grounds of vague suspicions that would not hold in a normal court. Israels intention here is to intimidate, to show them who’s boss, so that any potential resistance will be crushed before it can start.

According to a report by the Palestinian Prisoners Commission, 6489 Palestinians were arrested in 2018, among them no less than 1063 children. The reason we report a lower number is because we do not register every individual arrest, but every invasion or raid. Often in one home there are multiple family members being taken away by Israeli forces. 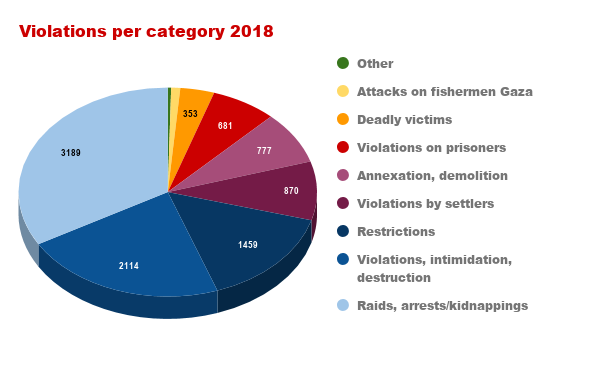 The total number of cases involving violence and intimidation, including settler violations, has increased. In 2018 there were 2329 cases, while in 2017 there were 2088. As mentioned before, the main reason for this is the enormous increase of settler violence.

The number of imposed restrictions (on freedom of movement, goods, water, electricity etc.) has significantly increased in 2018 with 1459 cases. In 2017 there were 1297.

Also in 2018 there were Gazan fishermen being shot at on sea by the Israeli navy, 94 times in total.

There were less cases of annexation, demolition and expropriation in 2018, however, big plans have been made to build even more illegal settlements. We will see it in 2019.

The team of Staat van Beleg wishes you a happy and peaceful 2019 and we are again hoping for a free Palestine in 2019!

* The numbers and percentages used for this overview are from Israeli violations listed in the Staat van Beleg archive.