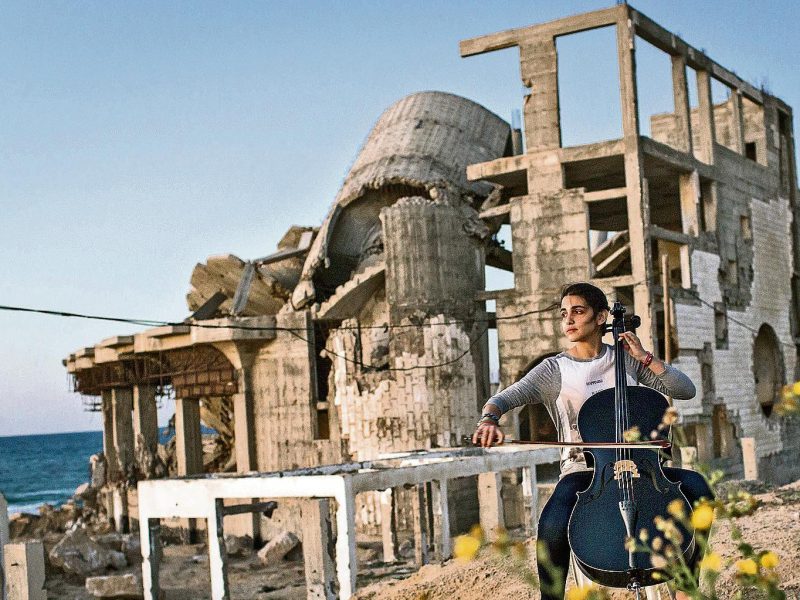 In the month of January 2019 Staat van Beleg could list 766 human rights violations (and 187 reports/ analyses). (see our archive)  This month with a focus on the normalization of the Israeli occupation.

“One of the most depressing things about Israel-Palestine is just how predictable and cyclical the violence can be. The almost-war in Gaza, the new wave of shooting, ramming, and stabbing attacks in the West Bank, the nightly Israeli army raids deep into Palestinian cities, the clashes that will soon become a regular feature of the coming months, the vigilante settler violence — it’s almost identical to the year before and the year before and the year before.” These are the words of Michael Omer-Man, editor-in-chief of +972 Magazine in an article of last December. This brings us to the topic we want to highlight this month: the normalization of the Israeli occupation. The normalization of the Israeli occupation is a growing Israeli tool to fight the Palestinian resistance and BDS. The strength of this tool is enabled by the gap of being under-exposed. It is worth to mention how difficult it is sometimes to detect the latter since Israel is scouring the world to find ways to infiltrate and enforce normalization. We will give some examples of different forms of normalization.

Normalization by the International Community

According to a recent report submitted to a United Nations inquiry by Defense for Children International-Palestine (DCIP) and the City University of New York (CUNY) School of Law Israeli forces have killed Palestinian children during protests in the occupied Gaza Strip in “conduct amounting to war crimes”. This is one of the latest reports over the years with proof of Israeli (war) crimes. More important is what will be done with the outcome of all these reports and the condemnations being made over the years by the international community. Statements against the construction of illegal Israeli settlements in the occupied territories are often made, but such statements are effectively nullified by the widespread international adoption of Netanyahu’s false slogan: “Peace will be achieved only through negotiations without preconditions.”

The practical outcome of this reality is that an occupation-supporting Israeli government can maintain an endless series of futile negotiations, thus perpetuating the occupation. In effect, the occupied people’s right to self-determination is dependent on the good — or bad — will of the occupier. In the meantime governments worldwide are being kept busy with pressure of the Israeli Lobby, mostly about accusations of antisemitism.

Not only is Israel pulling the antisemitism card wherever possible, Israel is also on a high alert worldwide to see if there are possibilities to enforce normalization. We will describe three cases where normalization was enforced recently.

Last December Netanyahu claimed that Israel had been allowed to fly over Sudan, which does not maintain diplomatic ties with the occupying regime. But Sudan’s President Omar al-Bashir denied the claims by Prime Minister Benjamin Netanyahu that Israel-bound planes are allowed to use the Sudanese airspace.

Then there was the case of the Dutch pension firm ‘Stichting Pensioenfonds Zorg en Welzijn’ (PFZW). On 10 January 2019 Middle East Monitor reported that the firm removed five Israeli banks from a blacklist it previously created in support of the Boycott, Divestment and Sanctions (BDS) movement. Middle East Monitor took this news from a Dutch-Jewish newspaper Nieuw Israëlietisch Weekblad (NIW) and it was also published by a couple of Israeli news agencies. However, already on the 9th of January the Reformatorisch Dagblad (RD) reported that this claim is false and the PFZW’s policies regarding Israel will remain unchanged. The only change is that according to new rules and regulations on the new list of 2019 the Israeli banks are not visible on their website.

Gaza is a documentary portraying the lives of everyday Gazan citizens which will compete for the Grand Jury Prize at Sundance this year and is directed by Garry Keane in collaboration with photographer Andrew McConnell. And now it comes: “Gaza emphasizes how families choose to live meaningfully beyond the rubble caused by constant bombardments”. Nothing wrong with that you would say, but by watching the trailer and seeing children swimming in a polluted sea like everything is peaches and cream will give you second thoughts. The whole idea that filmmakers are using this theme to highlight the aggressive siege on Gaza is questionable. Focusing on the endurance of the Palestinian people to deal with the siege in a positive manner raises normalization. Of course people will go on with their lives as good as they can. But their lousy situation, captured with almost two million people on a small enclave where the poverty rate exceeds 80% that is bombed from time to time, is still unchanged. In the meantime people laugh and sing and swim in a severely polluted sea because they can’t afford psychologists, in case they can find one, to heal their trauma’s.

We often hear Palestinians using the term ‘Sumud’ which stands for steadfastness. People supporting the Palestinian cause all over the world have deep respect for the strength and the endurance disseminated by the Palestinian resistance. Unfortunately herein lies a trap. – We will surely remember the viral image taken in Gaza by photojournalist Mustafa Hassona, which depicts a bare-chested Palestinian protester holding a large flag and wielding a sling. The photograph was taken as protests continue on the border of Israel. Gaza’s health ministry said 32 Palestinians were wounded as demonstrators threw stones at Israeli forces, who responded with tear gas and live fire. The image has provoked a huge reaction online, with social media users likening it to Liberty Leading the People, the iconic Eugene Delacroix painting of the French Revolution. Paintings such as Delacroix’s have decorated gallery walls for centuries. Encased within ornate gold frames and protected by glass, their figures are distant, providing us with the romantic fantasy of a world gone by. They might be based on historical events, but our minds can easily decipher that there’s nothing real behind the flat oily surface of the canvas. But Hassona’s photograph couldn’t be more real. Behind its palpable kinetic energy and visual dynamism lies one of the most desperate human rights situations in the world.The flippant reaction this particular shot, of someone literally risking being shot, represents our growing detachment from pain and lack of collective responsibility for it. There is nothing beautiful or poetic about the oppression of Palestinians. Beyond the lens, the constant misery of wasted life and unnecessary death in Gaza continues; we must not let that drift out of focus. – It is far beyond regrettable that people living in a terrible and dangerous situation, a situation that is so clearly the result of the Israeli siege and aggression, should showcase their cause to the world in actions that can lead to their death just to gain attention and to build momentum. Palestinians are so terrified that normalization will win over resistance and will therefore pull out all the stops avoiding this to happen.

In the coming time we will witness more Israeli attempts to enforce normalization. We can already see the fruitful outcome of Israel’s negotiations with the Gulf States/Arab States and African countries. An agreement was signed by major Arab countries included the announcement that Gaza is “insurgent territory”. If the Arab and African countries are normalizing their relation with Israel this could serve as a trending development. The danger of normalization lies within the time Israel wins to continue building illegal settlements and erasing Palestinians from their land. It also makes the chance smaller that Israel will ever being sued for its war crimes. In general it makes the chance on ending the occupation minuscule. And what does normalization do with the public? Let’s just focus here on people who are supporting the Palestinian cause. People will gradually withdraw from the cause. Some people simply cannot handle so much injustice. Seeing people fighting for keeping their land or returning to their land without any support from the international community is unpalatable for them. Others are in doubt if they can still contribute to a cause that seems so hopeless. Well, let us remind them that if they hadn’t been there for the Palestinians there would have been less Palestinian land and Palestinians left. Their support is of vital importance for the Palestinians since their unflagging commitment to the cause is a fist against normalization!