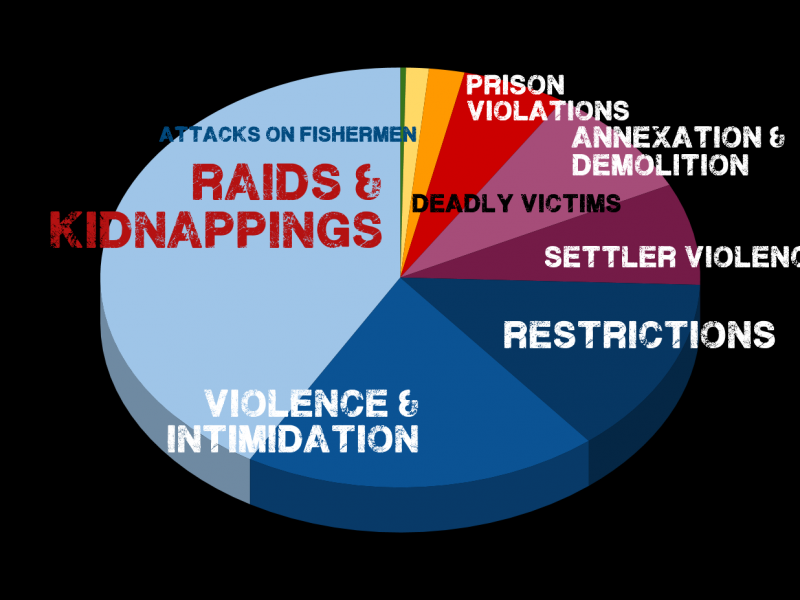 In the month of December 2019 Staat van Beleg could list 796 human rights violations (and 138 reports/ analyses). (see our archive) This month we look back at the year 2019.

The year 2019 was one of violations against Palestinian media. We wrote about this extensively in our August 2019 publication. In 2019, no fewer than 760 violations were committed against Palestinian journalists. These violations -among other things- consist of the imposition of restrictions, intimidation, seizure of equipment, arrests and physical violence, often resulting in minor to very serious injuries. This naturally led to major obstacles and understaffing in Palestinian news agencies.

One incident received a lot of attention in the press, namely the attack on photojournalist Moath Amarneh, who lost one of his eyes on 15 November due to an Israeli bullet. Amarneh was covering the confiscation of Palestinian territory by Israeli authorities near Hebron. After the attack, he was denied medical assistance on site and Israeli soldiers delayed his evacuation and in the mean time continued to harass him. The incident sparked a lot of outrage among journalists worldwide.

“Once again, the IFJ deplores the attacks on Palestinian journalists by the Israeli military. The IFJ recalls that international law applies everywhere and that no government is above it.”

Despite the frantic attempts by Israeli authorities to paralyze Palestinian media, many reports of human rights violations continued to reach the press. We divided them into 9 categories.

When we look at the nature of the violations committed in 2019, the first thing that stands out is the ‘Raids, arrests / abductions’ category with 3677 cases represents no less than 41% of the total. The vast majority of these are Palestinian civilians who were often lifted from their beds and taken away by Israeli soldiers during their recurring nightly raids, usually without a reason or under the guise of a vague accusation. This category also includes the military raids of Palestinian villages, neighborhoods and refugee camps. These are accompanied by a lot of ‘show of force’, intimidation and tear gas shells that are shot randomly on the streets and in civilian homes. Last year, Palestinian residents of Issawiya in occupied East Jerusalem, have had to endure a lot of it. In the summer, this area was tormented daily by Israeli soldiers and police, whose ultimate goal is to dislodge the Palestinians, making them leave the neighbourhood on their own accord. This purposefully creates new ‘facts on the ground’, a situation in which it will be easier for Israel to annex the area in the future.

With 1692 incidents, the ‘Violence, intimidation, destruction’ category accounts for more than 19% of all violations. In most cases this is about physical violence. Sometimes a violent arrest, sometimes a bullet in the leg of a demonstrator, sometimes children who are shot at with tear gas at school, sometimes an air raid on a building in the Gaza Strip, and so on.

The ‘Restrictions’ category is also well represented with 1203 cases. This includes violations of the right to freedom of movement, the right to housing, the withholding of bodies of killed Palestinian civilians, censorship, seizures and restrictions on water, electricity and goods.

The category ‘Violations by settlers’ includes 691 incidents. These range from physical violence and theft to vandalism and provocation. Often escorted and assisted by Israeli occupation soldiers. What also stood out in 2019 are the many settler attacks against Palestinian olive farmers during the harvest season. Palestinian farmers who wanted to harvest their crops were frequently threatened, attacked or driven away by illegal settlers who subsequently stole their harvests. In addition, olive trees were set on fire or destroyed. Even an 80-year-old Israeli rabbi who helped a Palestinian olive farmer fell victim to brutal violence and ended up in a hospital.

In 2019, many Palestinian homes were demolished and plans were made and implemented for new illegal settlements and expansions. We registered 763 of them under the category ‘Annexation, demolition’. Encouraged by the pro-Israeli attitude of President Trump, the Israeli government is no longer cautious in its settlement policy and made plenty of plans for annexation. To make matters worse, Trump stated in November that Israeli settlements will no longer be considered illegal.

We registered 498 cases in the ‘Violations on prisoners’ category. That is 36% less than in 2018. Yet again several Palestinian prisoners went on a hunger strike in 2019 because of the poor treatment and imprisonments without charge and trial. Cruel torture is also still no exception. In addition, five Palestinian prisoners died as a result of negligence on behalf of Israeli prison staff.

Fishermen in the Gaza Strip still can not exercise their profession unhindered. We registered 108 incidents in the ‘Attacks on fishermen in Gaza’ category. That is 14 more than in 2018. The fishermen were shot at by Israeli naval vessels and some of them were arrested, despite having the right to fish in their own waters under the Oslo Accords and even complying with Israeli restrictions on the number of nautical miles Israel allows them to sail.

With every offensive Israel claims that it’s a reaction to rockets from the Gaza Strip. A claim that rattles on different sides. As an occupying power, Israel cannot claim the role of victim, because an occupied people have the right to defend themselves against its occupiers, even using arms. Israel has actually never stopped its aggression towards the Gazan population in the border areas and its air attacks on resistance targets. In addition, the comparison is skewed between the mostly inferior rockets without explosive charge from the Gaza Strip and the technically advanced rockets from Israel. Then there is also the undeniable fact that many civilian casualties have fallen in the Gaza Strip, including children and pregnant women.

The graph below shows that with the number of 69 deaths, Israeli air strikes are responsible for 38% of the total number of fatalities. Yet most of the victims were shot dead one by one in the course of the year, 75 in total. The month of March was a bloody low. Of the 25 victims that month, 13 were shot dead by Israeli snipers in the border area in the Gaza Strip.

Negligence in detention (5 deaths), settler violence (3 deaths), other forms of Israeli military violence (12 deaths) together make up 11% of all fatalities in 2019. The other 12 victims have an indirect cause. Causes that are a predictable consequence of the Israeli occupation, such as the tragic case of the 2-year-old Abdul Rahim Shurav from the Gaza Strip who, due to a lack of medical equipment (due to Israeli restrictions), needed treatment abroad but did not get permission from Israel in time to leave the Gaza Strip. He died on November 26 during the trip, when he was transferred from one ambulance to another.

Child victims are unfortunately no exception in Palestine. We already wrote about it extensively in our November publication. More than 9% of all fatalities were less than 9 years old and 12 of them were just babies, toddlers and preschoolers. More than 14% were children between 10 and 18 years old. A total of 43 children died as a result of the Israeli occupation or Israeli aggression.

The majority of all fatalities, 44, were between 18 and 23 years old. Almost half of all victims had not yet reached the age of 24.

What we have seen in previous years, and again in 2019, is that the lion’s share of all fatalities are male. Only 9.4% are female. This is mainly due to the fact that most demonstrators in the Gaza Strip are young men and they are a significant part of all those Palestinians who have been shot.

At the end of 2019 there was a positive development. After years of preliminary investigation, chief prosecutor Fatou Bensouda of the International Criminal Court in The Hague (ICC) has finally announced that she will conduct a full investigation into war crimes in the Palestinian territories. Although Israel is not affiliated with the ICC, the Palestinian Authority is.

We close this annual review with this silver lining and the hope for justice. We wish you a happy, healthy and hopeful 2020!