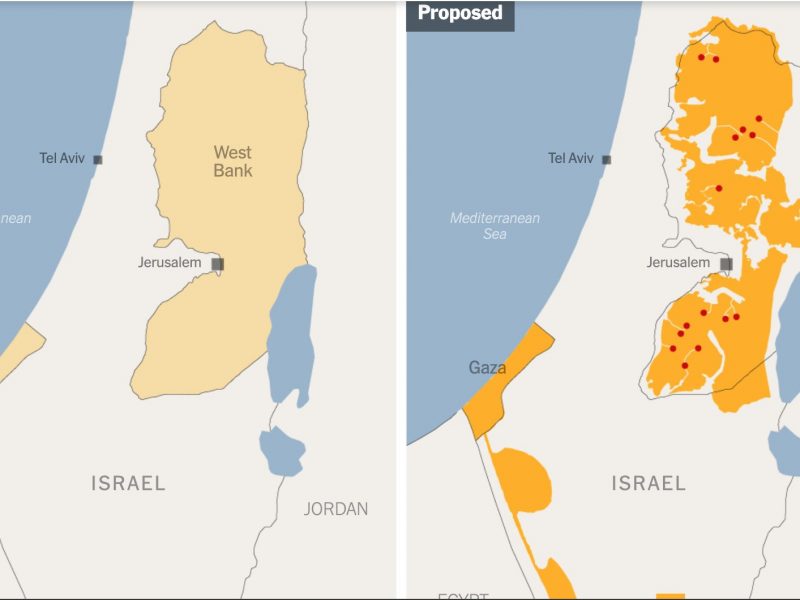 Overview February 2020 | The deal of the century

In the month of February 2020 Staat van Beleg could list 1,008 human rights violations (and 175 reports/analyses). (see our archive). This month we write about the ‘Deal of the Century’.

‘The Deal of the Century’ which was unveiled at the end of January received wide coverage in the media. The ‘deal’ has been thoroughly discussed from every possible angle. To understand the ‘deal’ this article from Mondoweiss gives a good impression of what the deal does and doesn’t say.

Meanwhile the name of the ‘deal’ is widely accepted while it’s questionable whether we can speak of a deal when one of the parties was not involved in drafting the plan and rejected the plan from the start. An important question is whether this deal comes as a surprise and if we can speak of an innovative approach towards solutions. And most important, will Israel still move forward with its plans despite Palestine’s rejection? Let’s see if we can uncover some of these dubious points.

Before the Great March of Return marches started in Gaza at the end of March 2018 the media already reported about Trump’s intention to present the proposal of a Middle East plan in the near future. Two months later the US Embassy opened its doors in Jerusalem despite the fact that the United Nations regards East Jerusalem as occupied, and the city’s status as disputed until resolved by negotiations between Israel and the Palestinians.

Palestinians knew by then that a red line had been crossed here. When more countries would follow in the footsteps of the US, normalisation of the occupation of Palestine and ignoring international law would reach completely new proportions. With the expected ‘peace plan’ of president Trump in mind Palestinians were very well aware that there was a lot more at stake with this move of an Embassy. Jerusalem, a symbol for a future Palestine state would be jeopardized with the support of the international community. Foreign entities disrespecting international law in this respect would open doors for Israel to set itself above the law in other respects. Israel could annex the last Palestinian lands surrounding Jerusalem, expel Palestinians and fragment Palestinian land that would make the creation of an undivided Palestinian state impossible.

Palestinians also knew that the right of return for Palestinian refugees would be in danger. So, when the people from Gaza participated in the Great March of Return on that important date of 14th May 2018, the day when they commemorated the Nakba and on the day the US Embassy opened its doors in Jerusalem, all these things were on people’s minds. And Israel saw the anger and the despair but also saw the Palestinian people united in their determination to resist. On that day when the United States and Israeli officials celebrated the unlawful relocation of the US embassy to Jerusalem, the IOF opened fire on unarmed civilians killing 61 Palestinians, including 7 children and injured more than 1,800 Palestinians that were peacefully marching.

Delays as a fruitful practice

If we look at Israeli policies towards efforts to work on a peace process we can clearly see a pattern of a deliberate delay approach. While Israel and the United States were drafting the “Deal of the Century” most of the components of the ‘proposal’ were already carried out over the years but were now steamrollered for the ‘real deal’. The announcement of the ‘deal’ was repeatedly postponed and Israel and the US made good use of the extra time to work towards a point of no return.

A state of de facto annexation already exists on the ground in most of the occupied West Bank. Almost two-thirds of the Palestinian territory, including most of its fertile and resource-rich land, is under full Israeli control.  But when we learned in November 2019 that the Trump administration determined that Israel’s West Bank settlements do not violate international law we could expect how the ‘peace plan’ would be shaped. In the meantime Israeli house demolitions spiked in 2019 compared to previous years with 265 structures being demolished in Jerusalem only. More Palestinian land was being fragmented to make way for the impossibility to create an undivided Palestinian state.

Another law that was implemented in the beginning of March 2018 allows the interior minister to revoke the permanent residency status of Palestinians living in East Jerusalem who engage in terror or other anti-Israel activities. Under the law, the state can deport anyone whose residency status is withdrawn.

At the same time the international community was chipping in by slowing down the process for finding a just solution. We just have to look at the repeated condemnations of different foreign bodies according to Israeli violations of international law that never resulted in effective measures. Up to this day most of the UN member states do not recognize Palestine as a state. What we see in return are pacifying policies to divert the attention from the reality. A good example is the initiative “This is my life” with activities to raise awareness about Gender Based Violence in Palestine which was funded and promoted by the Netherlands Representative Office in Ramallah. Another good example are the projects that aim to bolster power supplies in the West Bank and Gaza by donating solar panels while Israel is seizing solar panels that were donated not so long ago.

Then we have the delay in finding a just solution for the dire situation in Gaza. Already in 2012 the United Nations released an alarm-raising report on the state of the Gaza Strip: If the prevailing economic, environmental and political trends continued, the organization warned, the besieged coastal enclave sandwiched between Israel and Egypt would become unlivable by 2020. By that time the situation was already alarming but this didn’t result in actions. We only witnessed repeated warnings and predictions. Israel profited from the inertia by ramping up their violence and restriction policies.

Another important issue is the UNRWA affair. It is no coincidence that at the time when the ‘Deal of the Century’ was being drafted back in 2018 the United States, the biggest donor of the UNRWA, halted its annual aid. The United States and Israel have both accused UNRWA of mismanagement and anti-Israeli incitement. But what really bothered the US and Israel is the right of return, enshrined in UN General Assembly resolution 194. The UNRWA was established to provide assistance pending the implementation of that resolution, which has been reaffirmed by the General Assembly since 1948.

Can we speak of an innovative Peace Plan?

No, we can’t. In an article written by Yehuda Shaul for Foreign policy we read: “In fact, it bears striking resemblance to another plan published more than 40 years ago. In 1979, the World Zionist Organization released a plan titled “Master Plan for the Development of Settlements in Judea and Samaria, 1979–1983,” written by Matityahu Drobles, a former member of the Knesset for the Herut-Liberal Bloc—a precursor to today’s Likud party—and the head of the World Zionist Organization’s Settlement Division, the body responsible for planning and building settlements.”

Will Israel still move forward with its plans despite Palestine’s rejection?

That question is not hard to answer. The plan, whether it will be accepted or not is only developed to function as a one-sided legalization of what Israel had planned for and already carried out over decades. It would be naive to believe that Israel expected that Palestine would agree with the ‘deal’.

Israel is currently ramping up its annexation and demolition policies and new illegal settlements are being planned. Recently Israel built the basis of a new illegal settlement, next to the American Embassy, which is planned to be constructed on grabbed land from the village of Sour Baher in southern occupied Jerusalem.

Israel is wasting no time and already started with members of a joint US-Israeli committee mapping out areas of the West Bank. We don’t even have to speculate since Prime Minister Benjamin Netanyahu confirmed it shamelessly by saying that he and the Trump administration are moving ahead with plans to remap the West Bank to give Israel sovereignty over large portions of occupied territory, and Palestinians are going to have to live with that plan “whether they accept it or not.”

The Plan of the Century

Around the time when the centennial of the Balfour Declaration was being celebrated in 2017 Trump must have been started to lay the foundations of the ‘deal’. It would therefore be more appropriate to call it “The Plan of the Century” since that is exactly what it is. From day one it was the intention to create a Jewish-only state. We must never forget that or trivialize this bitter fact. Yes, Israel wants peace — after it gets rid of the Palestinians!

We should also keep in mind that the more Israel tries to normalise and legalise its crimes and land theft the more Palestinians will go out on the streets to resist. This already resulted in fatalities and many injuries among Palestinian protesters and journalists.

Israeli settlers are in a sublime state of euphoria since the ‘deal’ was announced. For them the ‘deal’ translates itself into encouragement. The last weeks were characterised by violent attacks on Palestinians and their properties.

The most crucial question is whether the international community will continue to stand by and watch how Israel will complete its Plan of the Century.