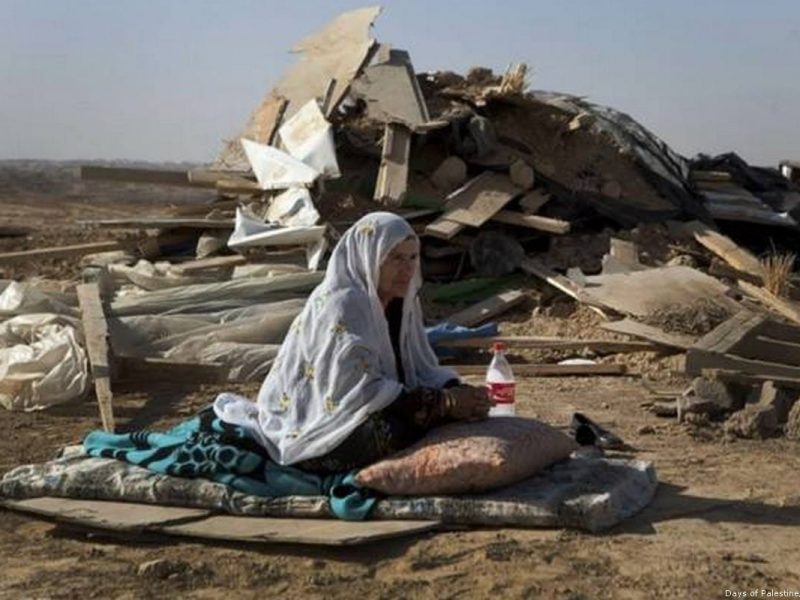 In the month of June 2020 Staat van Beleg could list 972 human rights violations (and 189 reports/analyses). (see our archive and the monthly violations reports of the Negotiations Affairs Department). This month we write about the impact of the Israeli de facto annexation of West Bank lands on farmers and Bedouins.

The last couple of weeks we have witnessed a media storm on the intention, with a self-declared July 1 target date by Netanyahu, to extend Israeli sovereignty to all West Bank settlements. Most of the articles consists of speculations on whether it will actually going to happen and if so, when it is going to happen and how much will happen.

We would like to mention the Settlements Regularization Law, passed by the Knesset in 2017, in which all West Bank settlements built on privately-owned Palestinian land would be “legalized” by de facto expropriating the land, planning the settlements and retroactively authorizing the housing already constructed on the land. The law would “regularize” these settlements in the West Bank with territories unilaterally annexed by Israel such as the Golan Heights and East Jerusalem, in direct violation of international law. The law, which has been frozen since its passage three years ago, stipulates that the land on which the settlements have been built will remain the property of their legal Palestinian owners, but their usage will be expropriated by Israel. In exchange, the owners will be compensated at a rate of 125 percent of the property’s value. However, at the beginning of June Israel’s Supreme Court ruled against legislation aimed at retroactively legalizing settlements. In a nearly unanimous decision, eight of the nine justices on the panel ruled the Regulation Law “unconstitutional,” on the grounds that it “violates the property rights and equality of Palestinians, and gives clear priority to the interests of Israeli settlers over Palestinian residents.” Netanyahu’s Likud Party calls the ruling “unfortunate” and vows to “work to legislate a new law.”

If we move from this point to the situation on the ground we can ask ourselves if Israel needs to implement laws to fulfill its settlement and annexation plans. In fact Israel never stopped annexing Palestinian land, planning and building new illegal settlements and demolishing Palestinian homes. All these endless speculations over the many years of Israeli occupation were actually a welcome distraction for a de facto annexation. We would like to shed some light on the most vulnerable victims of the Israeli land grab and demolition policies.

24 demolition orders for the Bedouin community of Wadi al-Seiq

By accident we saw an article on the Palestinian residents of the Bedouin community in Wadi al-Seiq, east of the West Bank city of Ramallah, that is experiencing a new Nakba as they are threatened with expulsion from their homes by the Israeli government, which seeks to take over and annex the area. The article from the Palestinian Information Center didn’t appear under news items. Although the incident took place in the week before the article appeared under “reports” which apparently makes it less likely many people would read it. Perhaps local news agencies are getting reluctant to bring demolitions under urgent attention, afraid the world will ignore Palestinian grief yet another time. However, this was a huge thing! It mentioned that Wadi al-Seiq’s residents had received 24 notices ordering the evacuation and demolition of houses and tents inhabited by Palestinian families. Representative of the Wadi al-Seiq Bedouin community Abu Bashar al-Ka’abna said that the Israeli government aims to completely empty the area of Palestinians as it is part of the annexation plan that is set to be put into action in the near future. Al-Ka’abna noted that Israeli settlers, escorted by armed soldiers, have repeatedly brought bulldozers and leveled Palestinian lands surrounding Wadi al-Seiq. One of the residents said, “Before Eid al-Fitr they handed me four home demolition notices. On the first day of Eid they came and seized irrigation hoses and drinking troughs I use for my sheep.” The Jerusalem Legal Aid and Human Rights Center said that Wadi al-Seiq’s residents have been receiving displacement and demolition threats since 1996, under the pretext that they are living in a military zone, although the area is located outside the shooting range designated for training.

When we googled on Wadi al-Seiq we could find an article from the Norwegian Refugee council from November 2017 mentioning a school in Wadi al-Seiq, funded by European governments, that is under threat of destruction and seizure. The school in Wadi al-Seiq was built with European donor funding as humanitarian relief for Palestinian Bedouin communities struggling to access basic services. They serve displaced and refugee communities who have already suffered destruction of their property over many years. The Wadi al-Seiq school community has received 11 stop-work orders for their structures in the last nine years! Two structures were demolished in 2012 and 2014, and all mobile latrines provided by a local NGO in 2011 were confiscated by the Israeli Civil Administration (ICA).

What we found remarkable is that we couldn’t find more information on the repeated school demolitions in Wadi al-Seiq, except for a brief note in an OCHA report. This made us wonder how many Palestinian Bedouins must have lost their lands and houses over the years. In statistics of the Israeli Human Rights Organization B’Tselem we can read that from 2006 through 31 May 2020, the homes of at least 1,085 people living in Palestinian communities unrecognized by the State of Israel – including 521 minors – were demolished more than once by Israel. There is a reasonable chance however that this number could be far higher. In an article from 2011 of Jordan Valley Solidarity it was mentioned that Between January 2000 and September 2007, Israel demolished 1663 Palestinian structures in the Jordan Valley.

A report by the UNDP from September 2013 draws attention on the dire situation of Palestinian Bedouins living in the occupied Palestinian Territory. The report shows a detailed overview of the forced transfer over the last decade and highlights the many restrictions imposed by Israel. What we read is that in Area ‘C’, only 225,000 dunums are available for the grazing of sheep and goats. Taking livestock out for pasture is forbidden in rural areas near Jericho and the Jordan Valley. In the past some Bedouin communities like Al Azazmeh in Masafir Beni Naim could travel 15 to 20 km in search for better pastures according to seasons. Now they can only move within a range of one or two km around the village.

Another important excerpt from the report is: “The threat to Bedouins and possible re-locations set the stage for a future territory swap where Palestinians will lose out on residency rights to geographically key land in exchange for a wasteland in the desert. While in 1967 there were 350,000 Palestinians living in what is now Area ‘C’, today there are only 150,000 left, a number that Israeli politicians have mused as acceptable to integrate into the Jewish state.” Whether Palestinian Bedouins will be acceptable to integrate in the Jewish state remains to be seen. Israeli lawmaker Bezalel Smotrich recently said that the birth rate among Israel’s Bedouin community “is a bomb that must be handled,” warning that “If we don’t defuse it, it will blow up on us much stronger.”

Last April, surprisingly on the eve of Israel’s annexing rage, UN Habitat in cooperation with the Ministry of the Local Government of the State of Palestine released a report with the purpose to contribute meaningfully to the formulation of policy change and an implementation strategy which can help to foster tenure security and resilience for Bedouin communities in Area C of the West Bank. The document started with this disclaimer:

“The designations employed and the presentation of the material in this publication do not imply the expression of any opinion whatsoever on the part of the Secretariat of the United Nations or the European Union concerning the legal status of any country, territory, city or area or of its authorities, or concerning the delimitation of its frontiers or boundaries, or regarding its economic system or degree of development. The analysis, conclusions and recommendations of this publication do not necessarily reflect the views of the United Nations Human Settlements Programme, its Governing Council, or the European Union.”

As an archive we are also not in the position to express our opinion but after reading the disclaimer it was time for us to speak up.

First of all the timing of this document is beyond offensive towards the Palestinian cause given the fact that the reality on the ground proves clearly that policy change is wishful thinking instead of a feasible goal.

Secondly, Palestinians are in dire need of staunch support from the international community at a time when the last pieces of land that could keep Palestine together as a state will most likely being annexed at any time. If we look at the disclaimer it is clear that the international community is highly reluctant to take a stance on Palestinian land and lives. And this actually makes the whole paper worthless. It is like all the other papers on Palestine from EU and UN bodies, an endlessly repetition of empty phrases that are in fact enabling the ongoing Israeli crimes.

The recommendations for policy changes in the report are blatantly surreal. We are not only witnessing daily settler violence towards Palestinian Bedouins and farmers but an occupying power, that ought to protect the people they occupy, is protecting these settlers in their crimes and contribute with violence, restrictions, confiscations, destruction and arrests. Meanwhile Israeli forces are bulldozing and uprooting Palestinian lands to make place for new illegal settlements. And for the Palestinian farmers that still have land but isolated by the separation barrier (the “Seam Zone”) 84% of the permit requests to reach their lands was denied by Israel in 2020 so far.

In a healthy environment it would certainly be an option to sit around a table to make policy changes but wouldn’t it be fair, given the situation, to admit that this option is not applicable. It is the unlawful occupation of a people that should be addressed not the ways to deal with it. It is the occupying power that should be sanctioned for their ongoing crimes.

How are we going to advise Murad Sartawi, a Palestinian watermelon farmer in the Jordan Valley, with this report to escape from Israel’s vicious actions to destroy his business to take over his land?  That is the reality and no report can change that.

This month only we archived 174 cases of annexation and the demolishing of Palestinian homes. Unfortunately our archive also can’t change the reality of a cruel occupation. We are well aware that archives, media coverage and activism are just a drop in the ocean compared to what could be achieved if we had properly functioning governments and intergovernmental organizations following international law.