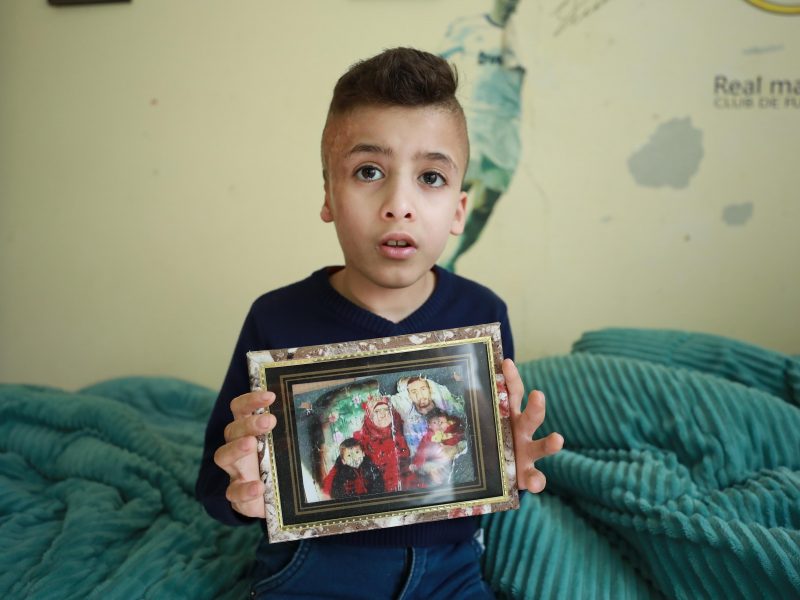 In the month of July 2020 Staat van Beleg could list 829 human rights violations (and 163 reports/analyses). (see our archive and the monthly violations reports of the Negotiations Affairs Department). This month we write about the current status of the prosecution of the perpetrators in the Duma arson attack case.

When we just started with this archive in July 2015 two family homes in Duma, a Palestinian village in the West Bank, were firebombed by masked attackers. According to all reports, the first house was empty and they then went to a second house, where 18-month-old Ali Sa’ad Dawabsheh was burnt to death. His parents and 5-year-old brother Ahmed Dawabsheh were critically injured and rushed to Israeli hospitals. The father Sa’ed Muhammad Hassan Dawabsheh died of his burns several days later. Five weeks later, the mother, Reham Dawabsheh, died of her injuries.

The Conviction of Amiram Ben-Uliel

Finally, after almost five years on 18 May 2020, an Israeli court found the Jewish settler Amiram Ben-Uliel guilty of racially motivated murder and he will face a potential life sentence.

Palestinians complain the court was sluggish in reaching a verdict, unlike the speed with which they process cases involving Palestinian suspects.

If we look at a report from Yesh Din, a non-profit Israeli human rights organization, we can learn that it is quite unique that there was an indictment filed. The organization published a data sheet on law enforcement vis-à-vis Israeli citizens, settlers and others, suspected of ideologically motivated crime against Palestinians in the West Bank. Monitoring of investigation files opened by the Samaria & Judea (SJ) District Police (the Israel Police district for the West Bank) from 2005 to 2019 shows that 91% of the files closed with no indictment filed. Indictments were filed in only 100 out of 1,200 investigation files.

In an article of Palestine Chronicle Ramzy Baroud mentions that the conviction of Ben is expectedly celebrated by some as proof that the Israeli judicial system is fair and transparent, and that Israel does not need to be investigated by outside parties. The timing of the Israeli court’s decision to convict Ben Uliel of three counts of murder and two counts of attempted murder was particularly important, as it followed a decision by the International Criminal Court (ICC) Prosecutor, Fatou Bensouda, to move forward with its investigation of war crimes committed in Occupied Palestine.

On the other hand the dramatic scenes in the Israeli media on the case give a good impression of how the overkill of information distract people from the actual crime. Four days before the ruling in the Lod District Court Jerusalem Post published an article with the melodramatic headline “The verdict in the Duma arson case could tear the country apart” At this point we could have guessed that justice would not prevail that easily.

The Sentencing of Amiram Ben-Uliel and his acclompice

In the normal course of legal proceedings it is expected that soon after the conviction a sentence will be handed down. According to an article in the Times of Israel the date of the sentencing was set on July 12th. However, a few days before the scheduled sentencing, Israeli police informed Dawabsheh’s lawyer, Omar Hamaisim that the session was postponed. It is hard to believe but to our surprise and dismay we learned that 10-year-old Ahmed Dawabsheh, the Palestinian child survivor of the arson attack, had been summoned to testify in an Israeli court on July 13th. In addition to Ahmed, his grandfather Hussein and his uncle Nasr have also reportedly been summoned to testify.

And again to our surprise and dismay, on 16 July the Times of Israel reported:

”The Lod District Court cleared for publication on Thursday the fact that new evidence had been submitted in the Duma terror trial by an attorney for an Israeli man convicted of carrying out a deadly 2015 firebombing that killed an 18-month-old boy and both his parents. The evidence submitted last week were transcripts from a series of interviews given in recent months by the attack’s lone survivor, 10-year-old Ahmad Dawabsheh, along with other members of his family. The defense claims they presented a different account of what transpired in the attack than what is described in the indictment against Amiram Ben Uliel, who was convicted in May of killing 18-month-old Ali and his parents, Riham and Saad, and seriously injuring Ahmad, who was five years old at the time.

The court agreed to clear for publication the fact that the evidence had been submitted, following a petition from the Haaretz daily. However, a gag order remains on the details of the evidence, so it was not immediately clear to which interviews the defense was referring.

Upon submitting the transcripts to the court last week, defense attorney Asher Ohayon requested that Ahmad be subpoenaed to testify to the apparent contradictions. The request was initially accepted by the court and the boy was scheduled to appear at a hearing this past Monday. Ohayon said he had requested a gag-order over the evidence to prevent the coaching of the 10-year-old ahead of his testimony.

On the day of the hearing, an attorney representing the Dawabsheh family submitted a petition signed by dozens of psychologists which asserted that a child suffering from PTSD should not be forced to testify in court about an incident that happened five years ago when he was just five years old.

The judge then implored the sides to reach an agreement that would prevent forcing the young boy to appear in court. Ohayon told The Times of Israel that he had initially reached an agreement with the prosecution as a result of which Ahmad would not have to testify, but claimed that the prosecution was walking back on its end of the deal, and the boy may be forced to appear in court as a result.

A spokesperson for the prosecution could not be reached for comment.

Omar Khamaisi, an attorney representing the Dawabsheh family, dismissed the significance that the defense was trying to attribute to interviews given by Ahmad. “You cannot use as evidence the words of a 10-year-old boy with PTSD regarding a traumatic event that took place five years ago,” he said.

As a result of the new evidence, the sentencing of Ben-Uliel has been delayed.

According to the conviction, Ben-Uliel and a teen accomplice had planned to carry out an attack against Palestinians as revenge for a drive-by shooting days earlier in which Israeli civilian Malachy Rosenfeld was killed.

When the younger accomplice failed to show up on time at the rendezvous point in July 2015, Ben-Uliel decided to carry out the attack on his own. He entered the Duma village and sprayed Hebrew graffiti on one home, then hurled Molotov cocktails through the windows of a pair of homes. The first building was empty, but in the second slept the Dawabsheh family.

The teenage accomplice, whose name is barred from publication as he was a minor at the time of the incident, reached a plea agreement with the State Prosecutor’s Office last May in which he admitted to having planned the torching of the Dawabsheh home.

In October, the Lod District Court ruled that he was a member of a terror organization, tacking the additional charge onto the rap sheet of the now-19-year-old.

In July 2019, the court released him to house arrest, less than two months after it threw out several of his confessions because they were extracted under extreme duress by interrogators of the Shin Bet security service.

The prosecution has asked the court not to sentence the accomplice to more than five and a half years in prison. Deducted from the sentence would be the time the teenager has already spent behind bars — about two and a half years.

The accomplice will be sentenced along with Ben-Uliel.“