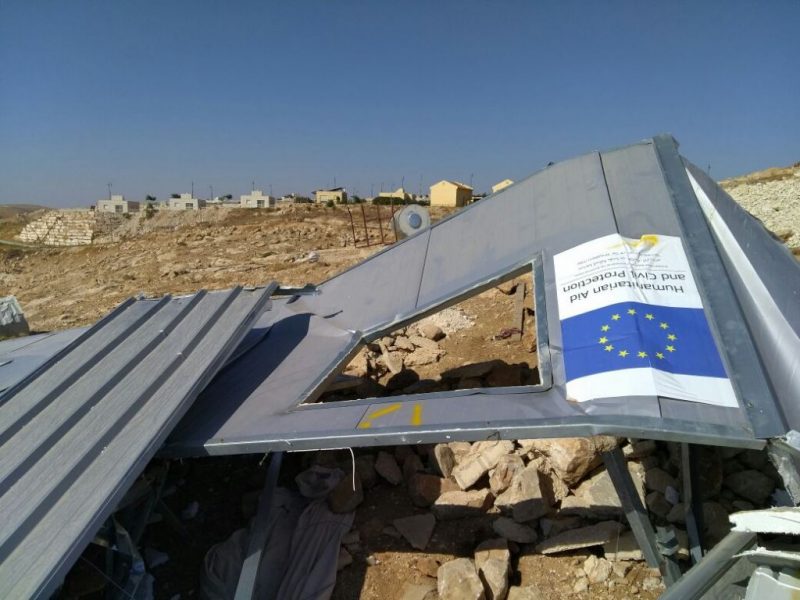 In the month of October 2020 Staat van Beleg could list 846 human rights violations (and 157 reports/analyses). (see our archive and the monthly violations reports of the Negotiations Affairs Department). This month we write about Palestinian donor-funded structures demolished or seized by Israel.

The Israeli occupation authorities (IOA) have demolished more than 500 Palestinian buildings in the occupied West Bank and Jerusalem since the beginning of this year under the pretext of unauthorized construction.

Many Palestinians were made homeless during the pandemic and without the required building licenses constructions are being repeatedly demolished and even tents, often donated by the Palestinian Authority and charities, are being confiscated over and over again. Even water networks to feed Bedouin communities are being destroyed.

Recently 73 people, including 41 children, were displaced when Israeli authorities demolished their homes and other structures and destroyed belongings in the Palestinian community of Humsa Al Bqai’a. Three quarters of the community’s population lost their shelters, making this the largest forced displacement incident in over four years. Located in the Jordan Valley, Humsa Al Bqai’a is one of 38 Bedouin and herding communities partially or fully located within Israeli-declared ‘firing zones.’ These are some of the most vulnerable communities in the West Bank, with limited access to education and health services, and to water, sanitation and electricity infrastructure.

On footage of these heinous acts of demolition and displacement we often see a sense of resignation. Bedouins picking up their furniture, including cradles, are calmly moving on. They got used to build and rebuild. But we also see anger, despair and crying children. We don’t read so much on how this people will survive, if they have a place to stay or if they ever have a chance to obtain a building license. If local advocates and international human right defenders would not monitor and report these demolitions their stories would disappear in a vacuum of unawareness.

The United Nations, the European Union and other international bodies repeatedly condemned these demolition acts, however without sanction policies. Since we see a rise in demolitions of Palestinian structures funded by the EU one would think measures will need to be taken.

In 2019, Israel destroyed or seized half a million dollars worth of EU-funded projects – a 90 percent increase from 2018.

On the other hand in 2019 “the number of internationally (mainly European) financed Palestinian projects shrank to only 12 compared to 75 in 2015.” This is “akin to penalizing Palestinians for the Israeli government’s destruction of European funded structures rather than standing up to Netanyahu’s government.”

From January to June 2018 over 197 Palestinian owned structures were impacted by demolition, seizure, sealing off, or eviction. Almost half of the incidents took place in East Jerusalem. As a result of the demolitions, 176 Palestinians including 70 children were displaced. Of the structures (such as classrooms and residences) targeted over the six month reporting period, 26 structures were funded by the EU or EU Member States for a value of €60,963.

Between 2001 and 2016, Israel caused an estimated $74 million in destruction to EU-funded projects. That included $26 million worth during Israel’s 2014 assault on Gaza.

Euro-Med Monitor (organization in charge of monitoring destruction of EU funded projects) had complained to the UN Human Rights Council that the Israeli authorities has been subjecting its staff and chairman, Dr. Ramy Abdu, to harsh punitive measures, including restrictions on movement and operations and smear campaigns.

The latest demolition of a structure funded by the EU

On 14 October the Israeli occupation forces (IOF) demolished a primary school that was funded by the European Union in the pastoral community of Ras al-Teen, east of Ramallah.

The Norwegian Refugee Council stressed that the occupation’s demolition of this school will force students to walk approximately 5 kilometers to reach the closest school to them in al-Mughayyir village.

Since its opening, the school has suffered from many problems, most notably the threat of the Israeli occupation. Nevertheless, when students started their academic year there, the school had no roof and it was just a building of primitive stones, then workers started adding the rest of the facilities to it.

The Irsheidat clan inhabited the Bedouin Ras al-Teen for more than 40 years in an area located between the villages of al-Mughayyir, Kafr Malik and Khirbet Abu Falah, northeast of Ramallah. Hajj Abu Salama, the clan’s mayor, stated in a statement earlier that the lands in which the residents lived are under Palestinian control but Israel is trying to banish them from it. Abu Salama said that the IOF began about three years ago to deliver notices to the community’s residents to demolish their tents or tin homes. 50 families live in Ras El-Teen, each consisting of eight members. He explained that the inhabitants live under harsh conditions as there is no water or electricity network, and there is not even a road network. In the winter, the suffering doubles greatly because of the rain and lack of services.

The gravity of the situation is revealed in the fact that the Ras al-Teen school was not the first school being demolished in the Ramallah province and it was also not the first school funded by the EU being destroyed. The Wadi al-Seiq school community, east of Ramallah, has received 11 stop-work orders for their structures in nine years time! Two structures were demolished in 2012 and 2014, and all mobile latrines provided by a local NGO in 2011 were confiscated by the Israeli Civil Administration (ICA). The school in Wadi al-Seiq was built with European donor funding as humanitarian relief for Palestinian Bedouin communities struggling to access basic services.

Since 2011 the Office of the European Union Representative (EUREP), Member States (EU MS), Norway and Switzerland have worked towards a European Joint Programming in Palestine.

Aligned with the the Palestinian National Policy Agenda (NPA) 2017-2022, the European Joint Strategy 2017-2020 focuses on the following five Pillars:

When we look at these five pillars and visualize them into reality on the ground we can only conclude that this is a package of false expectations for an occupied population in need of aid and protection. The aid of housing and services are being destroyed and all pillars in general are subject to the goodwill of Israel.

The international community is promoting and funding Gender equality projects in Occupied Palestine and is encouraging girls to study. The situation of the demolition of the Ras al-Teen school makes these false expectations all so clear. Would anyone let his 6-year-old walk 5 km to school in an unsafe environment? Without the means of decent transportation and without a safe home situation studying in these remote areas that are under constant thread is not exactly a priority. And still these people are fighting for education and for protection. But when they cannot build schools and houses on their lands, when all efforts for a decent and safe life are being hampered by Israel those pillars are just upholding the status quo.