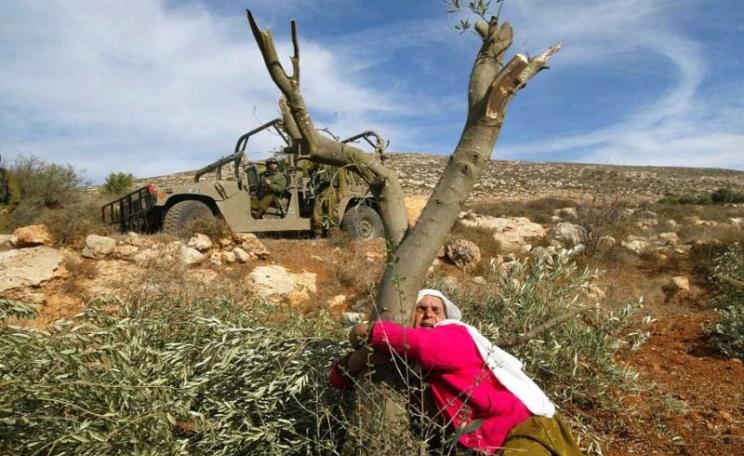 In the month of November 2020 Staat van Beleg could list 950 human rights violations (and 135 reports/analyses). (see our archive and the monthly violations reports of the Negotiations Affairs Department). This month we write about the repeated attacks of Israeli settlers and soldiers against Palestinian farmers during the olive harvest season.

In a statement released on 5 November the Office for Coordination of Humanitarian Affairs (OCHA) noted that, between 7 October and 2 November, it had recorded 33 incidents where people who were known, or believed to be Israeli settlers, attacked Palestinians or damaged their trees or produce. These incidents have led to 25 Palestinians being injured, 1,000 olive trees burnt, or otherwise damaged, and the theft of large amounts of produce. In some incidents, the statement declares, Israeli Security Forces intervened in clashes between Palestinians and settlers, including by shooting tear gas canisters and rubber bullets, resulting in the injury of olive harvesters, and forcing them to leave the groves. On 12 November Israeli soldiers severely beat 77-year-old Mohamed al-Salibi as he was collecting olives from his grove in an area near the illegal settlement of Bat Ayin, which was built on lands annexed from Beit Ummar town.

Instead of preventing settlers’ violence the Israeli army even attacked journalists who were covering an attack on Palestinian farmers. The Israeli authorities are also no different to the settlers in their attacks on Palestinian farming land including uprooting trees, restricting access to the land, preventing importing fertilizers to improve the harvest and confiscating Palestinian land to build illegal Israeli settlements. Those who have farmland near some settlements are given only two to four days to access it throughout the entire season, which makes it hard to effectively harvest them, makes the trees less productive, and means that settlers have more opportunity to inflict damage on trees.

The immediate aim of such attacks is to terrorize the Palestinians from attending their land which deprives them of a source of income. But for the long run, as the Palestinians become increasingly afraid of attending the land in fear for their safety, Israel will be able to confiscate the land under the pretext that it is abandoned land. Uprooting the trees is also a tool for uprooting the people by destroying their source of income which could force them to leave their homeland which is the main aim of Zionism.

According to the UN, about 57 percent of cultivated Palestinian land is used for olive trees. There are about 8.9 million trees in the Occupied Palestinian Territories. The olive make up 15 percent of the agricultural income which accounts for 5.5 percent of the Palestinian GDP. It is also estimated that more than 800,000 olive trees have been destroyed either by the state of Israel or by Israeli settlers. This frequently quoted figure, however, is more likely to be higher by now as the UN relied on the figures published by the Palestinian Ministry of National Economy and Applied Research Institute in 2011.

Following the start of the second intifada, more than 1 million trees in Gaza and almost 600,000 trees in the West Bank were uprooted, and it is estimated that about 2.5 million fruit trees have been uprooted since 1967 (Applied Research Institute – Jerusalem, 2007, and Palestinian Ministry of National Economy and Applied Research Institute – Jerusalem, 2011).

The uprooting of trees inflicts significant damage on the Palestinian economy and undermines the income and livelihood of the Palestinian people. The annual loss to the Palestinian economy is represented by the value of the economic production of the trees. The Applied Research Institute – Jerusalem estimates that around one third of the 2.5 million uprooted fruit trees were olive trees and that the remaining two thirds comprised other types of fruit, including about 34,000 palm trees. If the average annual productivity of one olive tree is about 70 kg, with olive production valued at the ex-farm price of $1.1 per kg, based on data from the Palestinian Central Bureau of Statistics for 2008, then the annual cost of uprooted olive trees may be conservatively estimated at $64 million.

The olive tree, an important element of the Palestinian cultural identity

Mohammed Samaana, a Palestinian journalist living in Belfast writes: “Every October, the whole family gets together and go to their land to hand-pick the olive the traditional way where they also enjoy having their food in the fresh air. Speaking from personal experience, it is one of the most enjoyable things I ever did. Most of the harvested olive is used to produce olive oil which is a source of income for many Palestinian families. The rest is pickled at home. Olive oil soap is the main traditional local industry linked to olive. The wood is used either for heating or decoration craft

In Palestinian culture, the olive tree is not only a source of food and income. It is also an important element of our cultural identity. Some trees date back to the Roman era and called Roman olive. One tree in Bethlehem which could be the oldest in the world is estimated to be 5500 years old as if it has been in Palestine as long as the Canaanites themselves. The olive tree is also used in poetry, folk and patriotic songs as well as a symbol for the Palestinians steadfastness, resilience and their attachment to their land as if they are rooted in it like an olive tree. The olive branch is a symbol for peace as well.”

If the Palestinian farmers would have relied on UN efforts their businesses would have been completely destroyed by now. So they depend on other means of protection. This protection comes from local and international volunteering human rights activists that are willing to monitor violence from Israeli settlers and soldiers during the olive harvesting season in the West Bank. Another way of protection is given by the people that are just coming to help with olive picking. For over a decade, hundreds of volunteers from around the world have traveled to the West Bank each year to accompany Palestinian farmers to olive groves in high risk areas.  Among them are also Israeli activists.

It is quite depressing to learn that is seems to be necessary to train Palestinian youth through a program. Action Aid Palestine (AAP) is seeking to help Palestinian farmers and show solidarity with them during olive harvest in the Bethlehem-district village of Walajeh and the Tulkarem-district village of Shweikah. The program, implemented in partnership with the Alternative Information Center (AIC) and  Al-Awda Center for Childhood and Youth, also aims to promote the role of youth in strengthening the resilience of farmers in their lands. These advocacy activities implemented by the youth aim to highlight the effect of Israeli colonial settlements and barrier on the lives of Palestinian and their livelihoods. They also shed the light on the humanitarian consequences on farmers due to restricted access to land, confiscation of water sources, restricted access to markets, livelihoods and effect of settlers’ violence on security and physical safety of farmers.

Those violent practices over the years have clearly gained ground. Practices that are unthinkable in any other society have become a yearly ritual in occupied Palestine. It indicates that Palestinians are not safe on their own land and that they are being refrained to earn a living. It is also evident that these criminal practices are being rewarded with more illegal Israeli settlements.

Uprooting olive trees is just one of a vast repertoire of tactics Israel deploys to make life intolerable for Palestinians. This is a part of the world where access to water, electricity and land is based on race. Although governments and international bodies are reluctant to use the term it is called ethnic cleansing! We see the same reluctance with the term genocide. This is a huge advantage for Israel’s settlement project and expulsion policies. In this way Israel can steadily continue grabbing more Palestinian land and build new illegal settlements.

On the other hand we see the term antisemitism being widely accepted and integrated in societies all around the world. This was partly enabled by the eagerness of governments to adopt the IHRA working definition of Antisemitism. That this would pave the way to oppress critics on Israeli policies became clear with the decision that was taken early December 2019 by the French National Assembly, stating that anti-Zionism is a form of antisemitism. We wouldn’t be surprised if Palestinians picking their olives will be seen as a form of antisemitism in the near future.