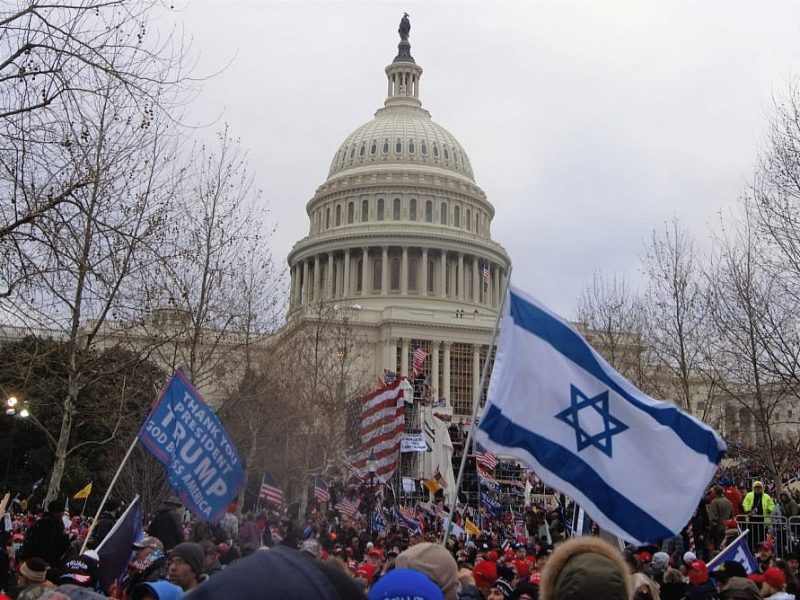 In the month of January 2021 Staat van Beleg could list 1,052 human rights violations (and 147 reports/analyses). (see our archive and the monthly violations reports of the Negotiations Affairs Department). This month we write about the similarities between Trump’s militant white supremacist supporters and extremist Israeli settlers.

On January 6, 2021, during the counting of electoral college votes for the 2020 United States presidential election, a pro-Trump mob violently stormed the capitol. The news was covered extensively in the media worldwide. An Israeli flag was spotted in the crowd, flying alongside flags championing the QAnon conspiracy, the III% militia movement, and other popular right-wing causes. “The Bible says, if you bless Israel, you should be blessed,” explained the protestor waving the flag, repeating a Bible verse beloved by the Christian Zionist movement. “So, we’re a nation that supports Israel.”

The overlapping of the military and law enforcement with Trump’s militant white supremacist supporters is a living embodiment of the relationships and ideologies that drove the colonization of the continent and the United States’ founding. Settler militias waged war against the Indigenous nations on the land that would become the US. The use of violence and terror to push out the existing population facilitated the state’s expropriation of Indigenous land.

As James North is mentioning in an article in Mondoweiss there were plenty of stupid comments in the mainstream U.S. media such as “We expect this kind of political violence in the Mideast, or in a banana republic — not in our own democratic America”. Such remarks betray a limited understanding of both the historic U.S. role overseas, and of America’s own history. In 2006, the George W. Bush administration pressed the Palestinian Authority to hold new elections in the occupied West Bank and Gaza. Bush’s advisers assumed that “the PA would easily win.” But Hamas actually came in first. So Bush applied strong economic pressure, and also “began planning for a coup to overturn the election results.” Bush asked conservative Arab states to supply arms to the PA’s armed branch, led by Mohammed Dahlan. In June 2007, Dahlan’s forces attacked Hamas in Gaza, but were “soundly defeated,” and Hamas took full power in the beleaguered territory. Slater points out: Since then, in Israel and the United States these events have been typically described as “a coup” when, in fact, it was a response to a real coup — the US and PA actions after the wrong side won the Gaza elections.

This indicates that it is difficult to determine the forces that are behind a ‘coup’ and it also shows that foreign powers cooperate in these illegal practices. We also recognize in this practice how Israel is fueling and supporting settler violence. The framework of rioters at Capitol Hill do not differ from that of the Hilltop Youth, a group of  hard-line religious-nationalist youth who establish outposts without an Israeli legal basis.in the West Bank. What they have in common is that both mob’s are politically fueled and protected. It’s quite simple, these mob’s and settlers are doing what a government cannot do by itself if it wants to uphold some kind of democratic and lawful status. Pushing the limit, create chaos, harassing and provoke, that’s what they can’t do. So they complement each other serving the same goal.

U.S. citizens are all being protected equally under the same law and people can get their rights according to the constitution. The occupied Palestinian people are basically outlawed and can not get their rights like Israeli citizens while settler violence goes mostly unpunished. They are held in a lawless stranglehold in which they have to endure Israeli oppression, violence and displacement on the one hand and on the other they have no access to jurisdiction. This vulnerable position also results in unlawful and severe punishments for only protecting their land and their properties.

We will now shed some light on the most extremist Israeli settler group, the Hilltop Youth, that gets tacit approval from the Israeli government in their violent practices. Ironically Netanyahu is fuelling extreme violent settler groups and at the same time exploiting the Capitol Hill riots to paint anti-Netanyahu protesters as a dangerous threat.

Israeli settler violence is increasing. In the month of December 2020 we could archive 117 incidents and in January 2021 123 incidents. These are only cases that appeared in the media, the actual number will be far higher.

Many settlers are active in the occupied West Bank and East Jerusalem but the settlers known by the name Hilltop Youth are the most feared among Palestinians. They completely dissociate themselves from Israeli institutions, and identify themselves with the Land of Israel. They settle on hilltops in areas densely crowded by Palestinians. Members linked to the group have been accused of engaging in Israeli settler violence, including vandalism of Palestinian schools and mosques, the rustling of sheep from Palestinian flocks and the extirpation of their centuries-old olive groves, or stealing their olive harvests. Settlers have long been accused of carrying out what are called “price tag attacks”, a term used for targeting Palestinian property in revenge for outposts demolished by the Israeli military, although no one as yet has actually been convicted of having been involved in such vandalism. According to a report by the Israeli rights group Yesh Din, just 7.4% of complaints filed by Palestinians from 2005 to 2014 have ended in indictments against Israeli civilians.

Last Friday the Palestinian Khaled Maher Nofal was being killed by a settler that stole his land and build a settlement post. Nofal went to his land to find settlement caravans placed in his own land in the village of Karkar, west of Ramallah He approached one of the caravans and knocked at its door in order to know what was happening and why were those caravans placed in his land. An Israeli settler opened the door and, according to Haaretz, opened fire immediately at the Palestinian without carrying out any suspicious tool.

After the arson attack in Duma in which an entire Palestinian family except for one member was burned to death by members of the Hilltop Youth you should expect a more rigorous approach from Israel to tackle the violence. Since 2013 the Israeli government initiated outreach programs like the Hebrew Shepherd and in 2015, the year of the Duma Arson Attack, Education Ministry-backed programs were founded. The Hilltop youth had long been identified as a national security threat placed under the jurisdiction of the highest levels of law enforcement. But in recent years, some government officials have begun shifting their approach, considering the root causes that have led hundreds of teenagers to abandon their homes for the West Bank hilltops and recognizing that tackling the phenomenon also requires an education-based approach. Here we see that Israel sees the group as dropouts, not as criminals.

If we believe Eliezer Shekhtman who moved to Israel from Chicago and joined the “Hilltop Youth” Jewish civilian violence has a place in the greater political scheme. Echoing Ginsburgh, who cites the Torah, said that “Jewish revenge” is a “value,” even though ideally a military should be exacting it instead of Jewish teens. “They are saying, ‘These are crazy kids, radicals who want to form a Jewish state and have state government by Torah and Jewish law,” But he doesn’t see the mission as crazy at all: “A lot of people want that.” Among the hardcore settlers, debate is now raging over whether hilltop youth are violent delinquents or young visionaries. For years, radical settlers have moved to the hills beyond the borders of existing settlements to establish new neighborhoods. Though the Israeli government considers these outposts unauthorized, it provides them with electricity, running water and security.

That Jewish civilian violence has a place in the greater political scheme becomes clear when we see some influential leaders of the Settlement Council building closer ties with terrorist groups from the “Hilltop Youth” that has decided to cooperate with students of the Yeshiva ‘Jewish religious institutes’ in order to build an operations room to prepare for the implementation of the annexation plan and the failure of the ‘deal of the century’.

A soft approach was also seen when the “Hilltop Youth” broke their corona quarantine back in April 2020 to attack Palestinians. An article in Israel Hayom questions how long the Israeli government will continue to ignore the serial hateful acts by the hilltop youth which indicates that their crimes will usually go unpunished.

In the beginning of January Issa Amro (40) appeared in Ofer Israeli military court facing up to 16 military charges and was charged with 6 counts. The Human Rights activist has rejected the charges, claiming that the move was an attempt by Israeli occupation authorities to crackdown on Palestinian non-violent protest methods.

One of the things Amro said in his statement is that he believes that Israel is engaging in a racist double-standard, whereby settlers get away with attacks on Palestinians and Palestinian peaceful protesters are jailed. He went on to say that “today in Hebron we are facing a large amount of attacks from the Hilltop Youth… settlers are calling for violence against Palestinians, organizing violent protests, closing streets, attacking cars, attacking houses, attacking farmers and the Israeli authority doesn’t really care about their violence. The decision on the length of Amro’s expected prison sentence will come on the 8th of February.

It has been noted that this case would represent a win for hardline settler leaders and set a precedence for further prosecutions of Palestinians belonging to non-violent organization, specifically other who form the Youth Against Settlements (YAS) team, which have successfully hosted thousands of International volunteers, observers, campaigners and politicians.

Amro is not the only Palestinian Human Rights activist monitoring settler violence that faces restrictions and punishment. Palestinian Human Rights Activist Younes Arar, who is active on Facebook and Twitter, has been banned for another period of 30 days on Facebook just after his earlier ban of 30 days expired and a few days ago he was again blocked for 30 days. Arar has been banned from social media many times before.