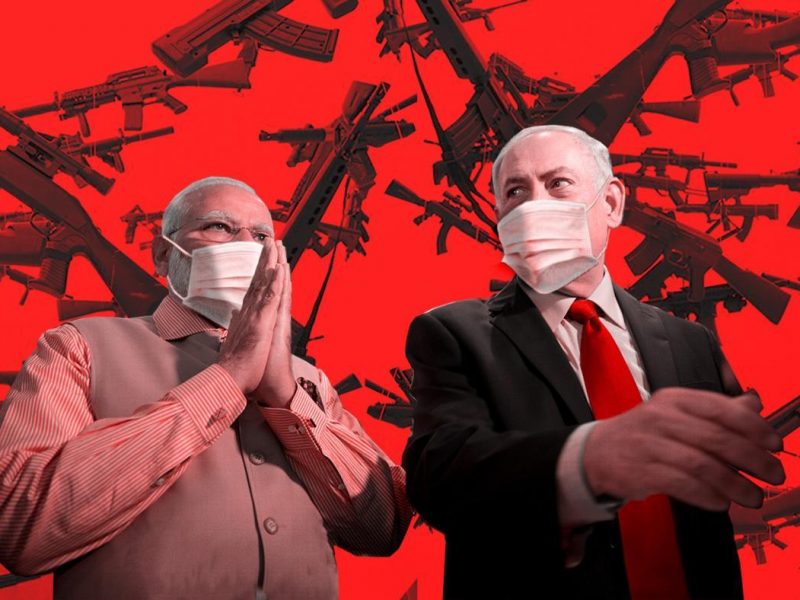 In the month of February 2021 Staat van Beleg could list 1,111 human rights violations (and 127 reports/analyses). (see our archive and the monthly violations reports of the Negotiations Affairs Department). This month we write about a Database with Israeli Arms Deals that was recently launched.

While following the ongoing Israeli violations it is noticeable that there is a certain pattern in the way the international community shows concern and reacts on incidents. Only when things are really too difficult to ignore we see a series of condemnations and some voices of concern from different international bodies. A good example is the case of the demolitions in the Bedouin village Khirbat Hamsa al-Foqa, in the Northern Plains of the occupied West Bank. Already in November 2020 Israeli forces demolished more than 70 structures, including residential, livelihood and sanitation facilities. Right after the demolition the EU issued a statement of condemnation followed by another statement, and yet another statement.

Meanwhile Israel has demolished the structures that were installed through donations by international human rights groups and by a European Union umbrella to provide shelter for the Palestinians of the community six times this year. It is quite logical when international aid is being destroyed by Israel it is inevitable to show concern and to condemn the actions. However, when we see the record of demolitions where international aid was involved versus the absence of Israeli regret or the willingness to cover the financial damage without sanction policies we may conclude that the international community accepts Israeli impunity.

In an article of the Dutch newspaper NRC Jannie Schipper mentions how the situation illustrates the little effect the European Union exercises on Israeli decision-making after so many condemnations. Here is where we can raise the question how it is possible that while Khirbat Hamsa al-Foqa was repeatedly being demolished the Netherlands (and many other countries) were still buying arms from Israel. In the last couple of months the Dutch army concluded a number of contracts with Elbit, one of Israel’s biggest arms manufacturers. Half December a three-year contract was signed to the value of 45 million euro for military radio’s as part of the “Verbeterd Operationeel Soldaat Systeem (VOSS)”, wherein Elbit plays a key role. On the same day an order of 12 million Euro was placed for 4.300 night vision goggles for helmets of the Dutch land forces and navy. In January another order was placed to the value of 20 million for computers in land forces vehicles. In February a contract was signed to the value of 68 million euro for Elbits Iron Fist systems for land forces combat vehicles. So why would Israel pay attention to international condemnation of its violent occupation, demolition and land grab policies when they are being rewarded and encouraged with 145 million euro contracts from one tiny country in only two months time.

Recently a database was launched exposing decades of Israel’s shady arms deals. We can now track down countries that are buying arms from Israel with a full record of arms deals over the last two decades. In an article of +972 Magazine the importance of this database is being explained.

Here is the full text:

“Over the last decades, Israel has reportedly sold weapons to approximately 130 countries. And yet, when one digs a little, it is impossible to find a full list of those countries. Apart from its reports to the United Nations Register of Conventional Arms, Israel releases no official information about its arms exports.

There are good reasons Israel wants to hide these sales, since its clientele has involved some of the world’s most tyrannical dictatorships and human rights abusers. This list includes apartheid South Africa, the military Junta in Argentina, the Serbian army during the Bosnian genocide, and Rwanda in the years leading up to the genocide in the country.

More recently, Israel has sold arms to South Sudan and the military junta in Myanmar.

Countries like Morocco, Mexico, Saudi Arabia and others have begun using Israeli spyware against journalists and political opposition. Some of these governments have committed what amounts to war crimes, and abetting such crimes is deemed illegal under international law.

Israel’s clients would rather not make any of this public. Thus, headlines about Israel selling a new missile or spyware system often mention an “Asian-Pacific country” or “a country in Europe,” in order to maintain the client’s confidentiality. This confidentiality then translates into a lack of both internal and external accountability for these governments and their military purchases.

Israel refuses to publish the data itself. The government works within a comfortable legal framework that doesn’t demand transparency or external monitoring, and the companies involved have an economic interest in maintaining the confidentiality of their clients. All this makes it nearly impossible to find out exactly to whom Israel is selling. And yet, this information remains vital.

This data is crucial for activists in Israel who in recent years have demanded — and sometimes succeeded — in stopping Israel’s arms sales to countries committing gross human rights violations. But these campaigns are impossible without the ability to track current weapons sales.

To try to expose this information to the public, the U.S. Quaker nonprofit American Friends Service Committee has launched the Database of Israeli Military and Security Exports (DIMSE). Over the past year, we have collected publicly available information on Israeli military and security exports from the past two decades. Using import reports, publications by the exporting companies, media reports, and more, we have been able to gather information not only on the sales themselves, but also on the political and military relations of the different buyer countries with Israel, information about the human rights situation in those countries, and the use of Israeli arms in human rights violations there.

This kind of information is vital to activists in places like Mexico, where Israeli spyware “Pegasus” was used against journalists and human rights activists. Moreover, the information is vital for Palestine solidarity activists who demand an arms embargo against Israel in order to bring about an end to the occupation. This is an especially important demand when considering that military operations in Gaza and the West Bank are used as a laboratory for Israeli arms companies that can develop, test, and then market their weapons a “battle proven.”

The database allows users to search by country, products (military and security systems), or by the major Israeli military companies. The database currently includes information on close to 50 countries, 30 military systems, and 11 companies, and will be continuously updated.

The database is not complete, and due to the uncompromising secrecy of the arms trade, it probably never will be. Perhaps one day we will be able to confidently and comprehensively understand the extent to which Israel is complicit in human rights violations across the world. But for now, what we can do is learn more about Israel’s arms exports, expose it wherever possible, and join campaigners around the world in fighting against the militarization and the violation of human rights.”