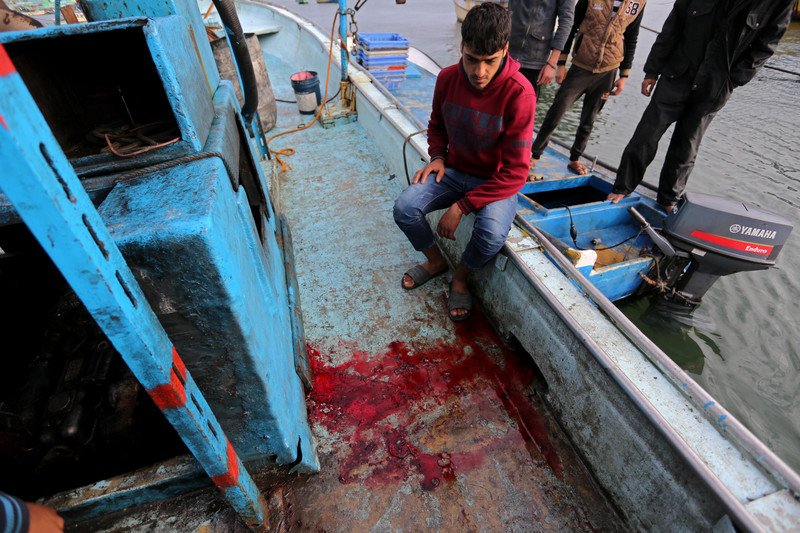 In the month of March 2021 Staat van Beleg could list 988 human rights violations (and 183 reports/analyses). (see our archive and the monthly violations reports of the Negotiations Affairs Department). This month we write about the lack of reporting in the mainstream media on the fishermen of Gaza.

On 7 March three Palestinian fishermen, the brothers Yahya Lahham, Hamdi Lahham, and Zakaria Lahham, were killed in a mysterious explosion while they were sailing off the city of Khan Younis in the south of the Gaza Strip. The nature of the explosion nor its source was known at the time.

What caught our attention was that the Nederlandse Omroep Stichting (NOS) reported about the incident on the same morning. In the headline the “mysterious explosion” was being mentioned.

However, the mystery was quickly resolved. On 14 March, a week after the incident, the Interior Ministry in Gaza released the results of its investigation into the deaths of the three fishermen. The investigation committee concluded that this explosion was tied to a previous incident, which took place on February 22nd in Khan Younis sea, near the location where the explosion took place in the boat. During this incident, the Israeli Navy used Quad Copter drones to drop floating bombs in the sea. These bombs carry powerful explosives, and are like ‘landmines’ on the sea in that the impact is usually on innocents. The remains of a Quad Copter drone was found stuck in the nets of the three slain fishermen, after the divers collected the wreckage. We didn’t see any update on the matter from the NOS.

Over the years there were thousands of incidents that were not mysterious at all. It was very clear that Israel was violating human rights by shooting on fishers and their boats in the waters of Gaza. Last year 320 Israeli violations against fishermen were being reported. In 2019 Israel shot at Gaza fishers 347 times.

Where were the NOS and other mainstream media all those years when these atrocities took place? When you google in Dutch language on “Palestinian Fishers Gaza” you will be amazed how few you will find. The first thing we spotted was an article from the NOS from 2013 about dead mantra’s that had been washed ashore along the coast of Gaza. The second article with some more relevant information we found was a long way back from 2010. The NRC mentioned how little sea was left by Israel for fishers from Gaza to fish.

Let’s have a look at what we are actually missing in the mainstream media.

Gaza is still under siege

In case we’ve forgotten, Gaza is still under siege. Gaza’s once healthy fishing sector has been almost obliterated as a result of the Israeli siege. In 2000 the Gaza fishing industry had over 10,000 registered fishermen. Gradually, the number has dwindled to 3,700, although many of them are fishermen by name only – as they can no longer access the sea, repair their damaged boats or afford new ones. Those who remain committed to the profession do so because it is, literally, their last means of survival – if they do not fish, their families do not eat. The story of Gaza’s fishermen is also the story of the Gaza siege. No other profession has been as directly linked to Gaza’s woes as that of fishing.

When the Oslo Accord was signed between the Israeli government and the Palestine Liberation Organization in 1993, Palestinians were told that one of the many fruits of peace would be the expansion of Gaza’s fishing zone – up to 20 nautical miles (approximately 37 km), precisely. Like the rest of Oslo’s broken promises, the fishing agreement was never honored, either. Instead, up to 2006, the Israeli military allowed Gazans to fish within a zone that never exceeded 12 nautical miles. In 2007, when Israel imposed its ongoing siege on Gaza, the fishing zone was reduced even further, first to six nautical miles and, eventually, to three. Notably, 2019 marks the first year that fishermen have been allowed to access up to 15 nautical miles.

The Israeli policy towards fishermen reflects a continuous pattern of collective punishment. The size of the fishing zone is determined by Israeli authorities and is often reduced or closed entirely at the whim of the occupying power, in violation of international humanitarian law and the rights of fishermen. In august 2020 the Israeli navy declared the Gaza sea temporarily a closed military zone. The Israeli military justified its action as a retaliatory measure against Palestinian protesters who had reportedly launched incendiary balloons into Israel. The act has been a desperate cry for attention since Gaza at that time was almost completely out of fuel.

Since 2015, 374 fishermen have been arbitrarily arrested, including 37 children. During arrest, the Israeli navy forces the fishermen to remove their clothes and swim to the naval vessels, regardless of the weather conditions. They are usually taken to Ashdod port in Israel, where they are reportedly subjected to physical and verbal abuse during interrogation.

Access to Palestinian territorial waters remains highly unsafe for Gaza’s fishermen. According to the thorough documentation carried out by Al Mezan, since 2015, the Israeli naval forces have carried out 1,043 attacks on fishermen—1,032 of them involving the use of live fire. 105 fishermen were injured, including four children, in the same period. According to a report of the human rights organization B’Tselem up to date Israeli gunfire has killed seven fishermen. This number is not including the 3 fishermen that were killed on 7 March. We are not sure if this number is including the case of Muhammad al-Hissi. On 4 January 2017, Muhammad al-Hissi went missing after the Israeli navy sunk the vessel on which he worked. Although his body has not been recovered, members of his family have resigned themselves to the probability that al-Hissi was killed.

Holding Back Development of the Sector

The Israeli authorities restrict and prohibit the entry of materials and equipment that it deems to be “dual-use” including spare parts for boat engines and fiberglass. This policy makes it almost impossible for fishermen to repair and upgrade boats, including those damaged by the navy during confiscation of the boats and while they are being held. Engines with the capacity of 40 horsepower and naval electronic devices such as GPS systems are also banned. Recently, the Israeli authorities began allowing the entry of steel cables used for pulling boats and nets, however, the most critical materials remain prohibited.

Following direct legal action in recent years by Al Mezan and partner organizations, the Israeli authorities have begun releasing, in large numbers, some of the confiscated fishing boats and equipment. As a result of poor storage and exposure to direct sunlight and rain while being held in Israel, most of the boats require repairs. The Israeli authorities do not compensate fishermen for damages that occur during their seizure or while the boat is being held in Israel. As a pre-condition to the release of their boats, the owners must sign a declaration in which they forfeit their rights to compensation and release the Israeli military from responsibility for the damages. According to Gaza’s Fishermen’s Syndicate, the Israeli forces are still holding 24 boats, two trawlers and 40 engines. Meanwhile, the Israeli authorities continue to seize Palestinian fishing boats and equipment without legal authority or guarantee of return.