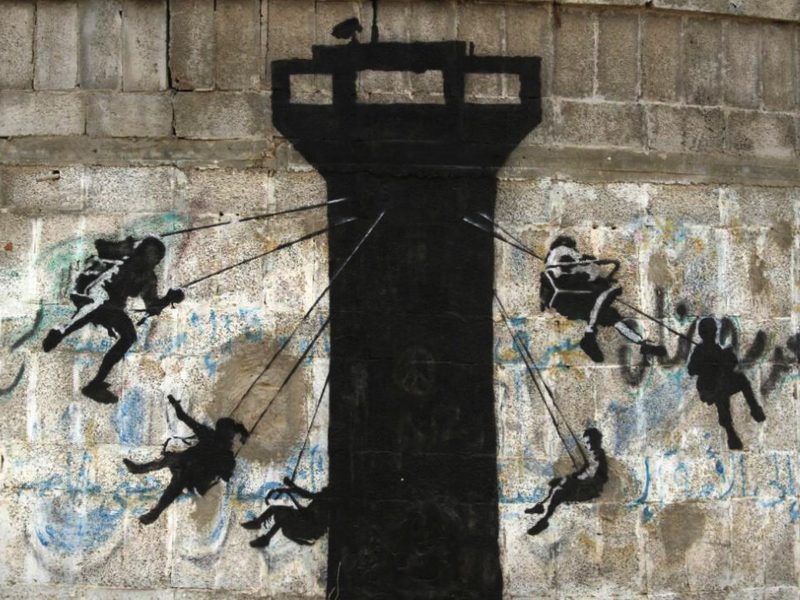 In the month of May 2021 Staat van Beleg could list 26,843 human rights violations, circa 900 per day, (and 183 reports/analyses). (see our archive and the monthly violations reports of the Negotiations Affairs Department). The Ministry of Health in Gaza didn’t release a complete list of victims of the latest airstrikes in Gaza. As soon as this list becomes available we will update our d-base.

This month we write about cultural support for Palestine. It shows a very different picture from the one we mostly see in the official media channels. Many voices are heard nevertheless and it feels like a change in public opinion. Many artists have been vocal about the recent aggression on the Gaza Strip and also in Sheikh Jarrah in East-Jerusalem where Palestinian families are evicted from their homes. Like with earlier attacks, tens of thousands of people took to the streets to protest. But it’s mostly the voices of well known artists with their huge number of fans that show the tide is turning. So there is room for a little hope, and that’s why we will show where this support is coming from.

The person following the news about Palestine will see a bombardment of articles and reactions about Hamas, terrorism, antisemitism, and a small, helpless Israel trying to defend itself against the forces of evil. But there is another side to it. One that doesn’t get much attention. Support from the side of cultural representatives in a broad sense. We know that people like Mahatma Gandhi, Albert Einstein, Bertrand Russell, Nelson Mandela and Desmond Tutu have expressed solidarity. But although they are legendary figures, change did not come from them. They could not bring our politicians to denounce the Isaeli crimes against the Palestinian people. But now the time has changed; we see the idols of today’s young people openly offering criticism of the dehumanizing treatment of one people by another.

“Books are the carriers of civilization. Without books, history is silent.” historian Barbara Tuchman wrote.

The complete destruction of Gaza’s biggest library during the last attacks feels like an echo from over 60.000 books and manuscripts that were plundered during the Nakba in 1948. Many rare books, manuscripts, and diaries. A treasure chest of Palestinian culture wiped out. Or even more accurately, it was the culture itself that was erased.
Samir Manour’s library contained some 100.000 books that were very important to the students of three universities in the neighbourhood. But on May 18 2021, Israeli bombes reduced this treasure to rubbles.

Supermodels Bella and Gigi Hadid were ventilating their anger about the deaths of so many Palestinians from day one.

Former television host and political commentator Geraldo Rivera talked on Fox News about an ongoing crime against humanity with the support of the US.

And popular comedian and writer Stephen Fry supported an article by Benjamin Moser. As usual, this angered some people. Moser insists on the fact that it’s so hard to escape indoctrination from the Zionist perspective. How often have we not heard “how complicated” the situation is. Historically maybe. “But morally? These days? Not complex. Just spend an afternoon in Hebron.“

Some people, like Paris Hilton and actor Mark Ruffalo retracted their tweets under pressure. But more and more people will refuse to be silenced anymore when speak out about injustice.

Over 600 international musicians, among which Patti Smith and members of Rage Against the Machine, signed an open letter to ask for a boycott of performances in Israel, until the occupation ends.

Last April, Roger Waters, Brian Eno and Tom Morello created an online event with Palestinian musicians to raise money for musicians from the Gaza Strip. Because there also people make music, people paint, people write. Although it did not get a lot of attention, the event was announced by Rolling Stone magazine and on CNN.

Popular singer Dua Lipa, together with the two Hadid sisters, got a special treatment by Shmuley Boteach. A full page ad in the New York Times with photos of the three women and the text “Hamas calls for a second Holocaust”. Just for being opposed to the killing of children by a very strong army. And this was not unique. Singer Lorde from New Zealand and American congresswoman Ilan Omar had the same experience.
Public figures – influencers – are often targeted for being critical of Israel, because their often younger followers are more difficult to contain by the Israeli propaganda.

But unlike Paris Hilton, Dua Lipa did not bow to the pressure and attacked the group that attacked her. And that’s good news. Bella, Gigi, Dua Lipa and Lorde are all in their mid 20s and their followers are less likely to be impressed by attempts to blackmail them.

All through the years many famous musicians have in one way or another made clear that they are opposed to the oppression of the Palestinian people. Most famous among them is probably Roger Waters, who has been working tirelessly for many years on behalf of the oppressed. But together all the others have helped to turn the tide over the years. Idols of many, then and now, Joan Baez, Elvis Costello, Peter Gabriel, Annie Lennox, Rag’n’Bone Man are just a few names out of a long list.

Ingrid Rollema is a Dutch sculptor who has been working for 25 years in Khan Younis, the refugee camp in the Gaza Strip. Through The Hope Foundation, she is helping traumatized children to get a better life. She said it was Arafat who once suggested that being creative could help children to cope better with the harsh daily reality.

Mysterious artist Banksy was present in the Gaza Strip (Banksy creates street art in Gaza criticising ‘world’s largest open-air prison’) and at the Separation Wall. In Gaza he created graffiti art as a reaction to the destruction and victims of the Israeli attack in 2014. His Walled Off Hotel in Bethlehem with its colonial interiors and its view of the Separation Wall has become very popular. He also left his trace on the wall itself.

Destroyed House Gaza is part of a series by Dutch artist Marjan Teeuwen of houses that are transformed into art installations before being demolished. What is left afterwards are photographs which are an intrinsic part of the work. She did a couple of these monumental installations in Russia, Holland and Japan. But the Gaza Strip among the destructions of attacks from years ago, gave this project a very different dimension. It was done in 2017 in Khan Younis/Rafah, near the Egyptian border. The same house had been bombed three years earlier and one of the sons lost his life as a result. Destroyed House Gaza shows like no other work of art the alienation that comes with the suffering of war and occupation.

Marjan Teeuwen: “Destroyed House Gaza is a metaphor for all past wars, for the current hotbeds and for the inevitable wars to come. Man cannot overcome the polarity of building versus destroying.“

And then we have the Palestinians themselves. Their very existence show the strangeness of the situation. Malak Matter is only 21 years old, but she has witnessed – and survived – the attacks from 2008, 2012, 2014 and now 2021. And she is one of the “lucky ones”. At a very young age she became noticed for her poetic paintings which allowed her later on to study in Turkey for a couple of years and to visit other countries like France and Holland. Most other Palestinians in Gaza don’t have that luxury.
During the latest attacks, fear prevented her from painting and besides Israel had bombed the only art supplies store in Gaza.

On the last day of the bombings she held an interview by telephone. She said: “The most precious thing that anyone can have is not personal achievements. It’s having a sense of safety. I’ve had successes in my life for someone at my age but they feel useless now. What is the value of these achievements if my life is at risk?“

GQ magazine listed her among the most influential Palestinians of the moment. (Five Palestinian Artists You Need To Know About)

Finally: over 1000 Canadian artists and cultural workers demanded to impose military and economic sanctions on Israel.

Attempts to destroy the history, culture, identity and dignity of a people amount to genocide. The dehumanization of the other is a necessary precondition for this. If voices from a cultural sphere without borders could make a difference in public opinion there would still be some hope left. What was destroyed returns to claim its existence. No vengeance, but justice. That’s the difference between universal and nationalistic values. Civilization is the magic formula.