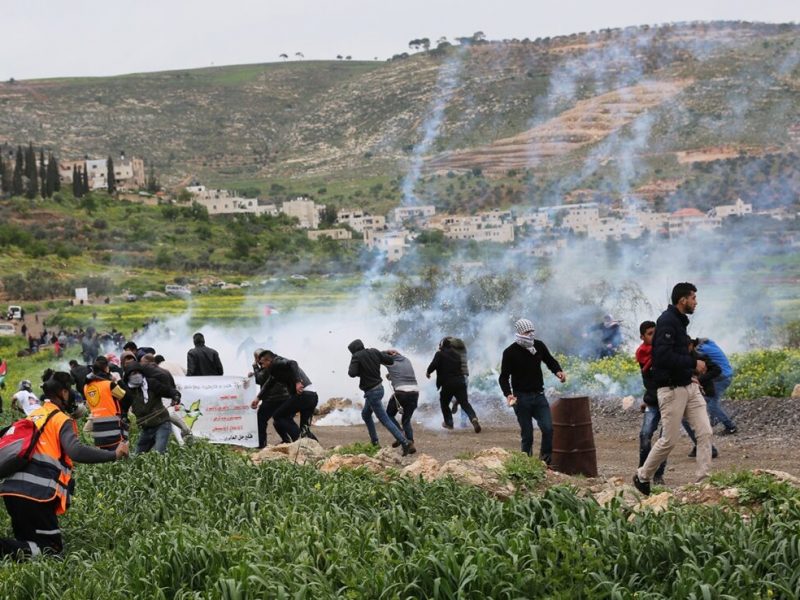 In the month of June 2021 Staat van Beleg could list 2,627 human rights violations (and 224 reports/analyses). This month we write about the establishment of a settler outpost on Mount Sabih in the village of Beita, south of Nablus, and the seizure of lands belonging to Palestinian villages in the area.

In the month of May the world was mainly focused on the Israeli assaults on Gaza, missing out on atrocities taking place in the West Bank. Besides the violence in Occupied Jerusalem at al-Aqsa and Sheikh Jarrah that went viral with hashtags another struggle went almost unnoticed. In the village of Beita, south of Nablus city, Palestinians have not only been protesting decades of Israeli oppression, but also intensified Israeli land pillage of their land. The ongoing protests since over a month come as a rejection to the Israeli construction of a settler outpost on Mount Sabih, as well as the seizure of lands belonging to Palestinians from the villages of Beita, Huwarra, and Za’tara to inaugurate a new Jewish-only bypass road.

In addition to the construction of a settler outpost on Mount Sabih, the Israeli occupation forces have erected another one on Mount Al-Arma, to the north of Beita, a few months ago. Both Mount Sabih and Mount Al-Arma enjoy a strategic location as they overlook the Jordan Valley, a fertile land threatened with Israeli annexation. Seizing the two hilltops represents a panoptical defensive tool as they would grant the Israeli occupation with a panoramic view over the Jordan Valley and the whole district of Nablus. This is why the Israeli occupation authorities have assigned them a place in its settlement expansion project. The construction of settler outposts on both Mount Sabih and Mount Al-Arma is not the first of its kind. Before the newly erected outpost on Mount Sabih, there was another one removed due to Palestinian resistance. This was preceded by Israeli attempts to construct a military base on the hilltop. Similar to Mount Sabih, Mount Al-Arma has been targeted by colonial greed more than once.

Attempts to take over Mount Al-Arma have started in the 1980s; but all of these attempts failed due to Palestinian popular protests. Latest of which was on March, 2020, when protesters succeeded in warding off Israeli Jewish settlers from the area. Thanks to more than a month of protesting, where the Israeli occupation murdered two Palestinian minors that Palestinians could achieve this victory; which has been recently disrupted by the re-construction of another settler outpost on Mount Al-Arma.

The re-erection of a settler outpost on Mount Sabih in the south of Beita, another one on Mount Al-Arma to the north of the village and a bypass road to the west is an Israeli measure to ghettoize Palestinian communities and disrupt their geographic contiguity with other Palestinian towns and villages.

Moreover, both Jewish-only bypass roads and settlements are part of the Israeli apartheid matrix of control over the West Bank; in addition to military checkpoints, the Apartheid Wall and the classification of certain areas as closed military or firing zones.

Surprisingly on 28 June Quds News Network reported that representatives for West Bank illegal settlements agreed on evacuating the outpost of Avitar and turn it into a religious school and a military zone.

To disperse and suppress the protesters who ascend Mount Sabih almost every day, combat-ready Israeli soldiers use fatal violence against them. In almost one month, four Palestinians from the village of Beita have been lost to Israeli brutality while trying to oust the settler outpost built on top of Mount Sabih. Mondoweis even reports about five victims, according to locals.

The brutal murder of Ahmad Zahi Banishamsah, 16, on Wednesday, June 16, 2021, is the latest Israeli crime against the peaceful protesters of Beita. Like hundreds of other young protesters, Ahmad was expressing his outrage at the Israeli plunder of lands belonging to his village when an Israeli soldier shot him in the head with live ammunition. The medical staff at Rafidya hospital in the city of Nablus tried desperately to save his live but they failed after he succumbed to his wounds hours after he was shot.

Less than a week before, on Friday, June 11, 2021, the Israeli occupation forces shot dead Mohammed Said Hamayel. Mohammed, who is only a year younger than his friend Ahmad , was participating on the Friday protest, where thousands from Beita and neighboring villages demonstrate at Mount Sabih, when Israeli soldiers shot him with a live bullet in the heart.

The third protester killed by the Israeli occupation was 28-year-old Zakariya Hamayel, a teacher of Arabic. He was shot in the chest on Friday, May 28th.

About three weeks before the killing of Zakariya, the residents of Beita mourned the Israeli murder of 42-year-old Issa Burhm. Issa is a father of four children. While he was in a family gathering, he heard the voice of someone calling on anyone who has a car to go to Mount Sabih and transport injured protesters to hospital after the Israeli occupation prevented ambulances from accessing them. Burhm did not hesitate to help the wounded protesters. He ascended Mount Sabih, and while he was carrying one of the injured protesters, an Israeli soldier shot him in the belly. While people were carrying him to hospital, he could only utter a few words before he passed away minutes after he was shot: “Don’t come with me… return back to the Mount [Mount Sabih] … my daughters.”

In addition to the point-blank murder of four peaceful protesters, hundreds of others have been injured with live ammunition, rubber-coated bullets and tear gas.

Those who are neither killed nor injured are now being tortured in Israeli colonial dungeons as the Israeli occupation have intensified its overnight raid of Beita to arrest protesters.

What we see very clearly is a routine in collaboration between settlers and the Israeli army/government in their efforts to take over Palestinian land to establish new illegal outposts and settlements. A report of the Israeli human rights organisation B’Tselem sheds a light on state-backed settler violence.

Violence by settlers (and sometimes by other Israeli civilians) toward Palestinians has long since become part of daily life under occupation in the West Bank. These actions range from blocking roads, throwing stones at cars and houses, raiding villages and farmland, torching fields and olive groves, and damaging crops and property to physical assault, sometimes to the point of hurling Molotov cocktails or using live fire. Over the years, this widespread violence toward Palestinians has resulted in injuries to life and limb, as well as damage to property and land.

“The long-term outcome of settler violence is the dispossession of Palestinians from more and more areas in the West Bank, facilitating Israel’s seizure of land and resources.” – B’Tselem

Under international law, Israel has a duty to protect Palestinians in the West Bank from this conduct. However, Israeli authorities routinely shirk this responsibility, even when the violent actions can be anticipated. Thousands of testimonies, videos and reports, as well as many years of close monitoring by B’Tselem and other organizations, reveal that Israeli security forces not only allow settlers to harm Palestinians and their property as a matter of course – they often provide the perpetrators escort and back-up. In some cases, they even join in on the attack. In other instances, security forces have prevented anticipated harm by removing the targeted Palestinians, rather than the Israeli assailants.

A good example of the collaboration between settlers and soldiers is a picture that appeared on social media showing several soldiers helping settlers carry prefabricated structures as they set up homes in the Evyatar outpost on mount Sabih.

Another example of collaboration is the storming by more than 100 settlers of Mount Al-Alam area (Ni’lin, west of Ramallah) on 20 June, which is threatened with seizure. At the same time Israeli occupation authority (IOA) vehicles bulldozed 300 dunums in its vicinity.

The current focus is mainly on occupied Jerusalem where Palestinians living in places like Sheikh Jarrah and Silwan are threatened with evictions. Meanwhile Israeli settlers and soldiers are progressing in confiscating more Palestinian land and taking over mountains over the entire West Bank in their efforts to establish new illegal settler outposts and settlements.

On 4 May 2021, the Israeli Knesset Arrangements Committee, approved in a 19-13 votes, to accelerate the passing of a law/bill (by abandoning the waiting period of 45 days), to unilaterally legalize 70 Israeli outposts in the occupied West Bank. The bill/law intends to withhold any possible demolition of the unauthorized outposts or the neighborhoods in settlements; as it allows 2 years grace period for the “Israeli government” to decide their status. The bill also requires the government/ the Israeli Civil Administration to provide such locations with the entire infrastructure necessary to their survival: water, electricity, roads, etc. in spite of the fact that many of the established outposts are already linked to the infrastructure system from the nearby ”mother settlement”. Even-more, the bill requires the Israeli finance minister to facilitate mortgages to purchase an apartment or a house; and even though the outposts and neighborhoods branded “illegal” they still receive budgets on a regular basis from various sources; including the government and the settlements’ regional council in the West Bank.