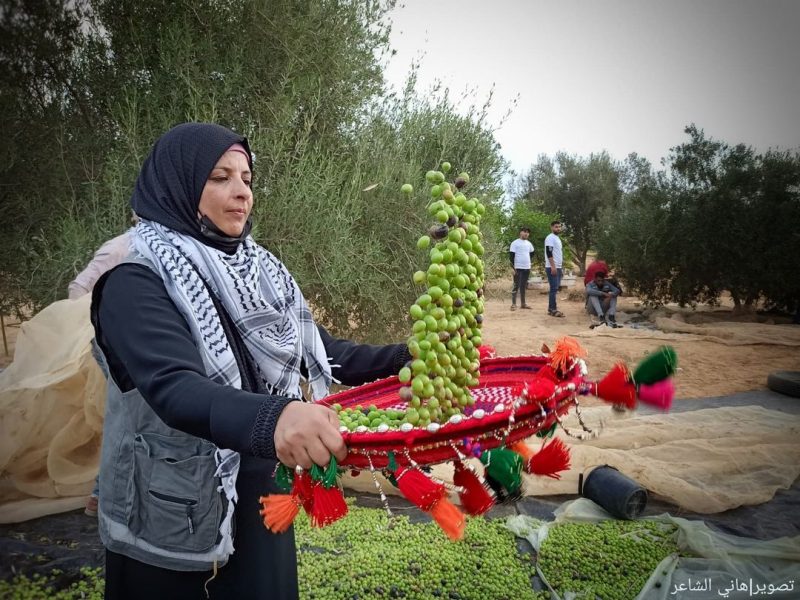 In the month of October 2021 Staat van Beleg documented 2,171 human rights violations and 201 reports. This month we write about the Israeli attacks against Palestinian olive farmers, the uprooting of their trees and restrictions during the olive harvesting.

For more information about Israeli violations on the Palestinian people, go to our archive or see the monthly violations reports of the Negotiations Affairs Department.

In the beginning of October the Palestinian olive picking season started. In a world outside occupied Palestine an occurrence that will not be witnessed by anyone that is not involved or invited. But not for Palestine. From the first day of the harvest local news agencies reported on several violent attacks by Israeli settlers on farmers, the uprooting of their trees and the stealing of olives.

Olive trees, a symbol of Palestinian resistance and resilience

All those attacks can not take away the joy of harvesting olives. The harvesting of olives is an annual recurring activity that is being carried out in a festive atmosphere. Families are cooperating in picking their olives and they will gather under their trees to enjoy a picnic afterwards. In the eyes of a Palestinian olive farmer every tree that survived, every harvested olive and every bottle of olive oil sold over the counter is a victory in the face of the occupation. Olive trees carry more than an economic significance in the lives of Palestinians. They are not just like any another trees, they are symbolic of Palestinians’ attachment to their land. Because the trees are draught-resistant and grow under poor soil conditions, they represent Palestinian resistance and resilience. The fact that olive trees live and bear fruit for thousands of years is parallel to Palestinian history and continuity on the land.

More than 9,000 olive trees destroyed in one year time!

Under the extremely hard conditions Palestinian farmers are struggling to get hold of their lands and trees, getting access to work on their lands and being able to survive unscathed while protecting their olives seems a futile exercise. Certainly given the fact that Palestinians plant around 10,000 new olive trees in the West Bank each year and simultaneously more than 9,000 olive trees were destroyed by Israel in one year time!

Luckily there are international organisations that make up for the loss of these trees. Through one of these organisations, “Plant een Olijfboom”, almost 37,000 trees were sponsored this year. Without this support Palestinian olive farmers would loss their livelihood and because of this dependency they find themselves in a vulnerable position. This is one of the many examples in which Palestinians are being deprived of their right of self-determination.

Farming and harvesting olives, a privilege given by the goodwill of the occupier

What we see is a situation wherein something as normal as farming and harvesting olives has become a privilege given by the goodwill of the occupier. Strange enough the international community accepts the status quo. Hardly any newspaper outside Palestine is covering updates on the situation. Neither do politicians seem to care that people under occupation, lacking legal and physical protection, are being stolen from their income. While in 2008 a Dutch news paper even promoted Palestinian olives and olive oil these days the mainstream media is extremely reluctant in reporting on the violations.

While the attacks are labelled as settler violence in most of the cases the Israeli army is protecting the settlers in their crimes or is even participating. Instead of arresting the settlers and punishing them for their crimes Palestinian farmers and monitoring activists are being arrested and attacked according to different reports.

It is noteworthy that there are three documented cases in October where Israeli forces operated independently, without involvement of settlers. On 16 October Israeli soldiers fired tear gas canisters at Palestinian harvesters, who included landowners and volunteers from Al-Quds Open University, that were picking olives in Zabouba village, west of the northern West Bank city of Jenin. On 18 October Israeli forces denied Palestinian olive harvesters access to their groves, south of Qalqiliya city. On 20 October the Israeli occupation army bulldozed about 10 dunums of land planted with olive saplings near Wadi Rahhal village in the south of Bethlehem belonging to a local resident called Ibrahim Abiyat.

The Israeli occupation authority determines when and for how long farmers can work on their lands, in many cases only a few days per year. Less and less farmers from the restricted areas behind the Barrier, the ‘Seam Zone’, get permission to enter their lands.

The different violations against olive trees and farmers

In our overview of November 2020 we already wrote extensively about the violations against olive trees and farmers. Although not much has changed we will continue to raise the issue.

All the violations since the start of the olive season are stored in our archive under settler violence. Below you will find a list of different documented violations against olive trees and farmers that took place during the month of October.

There are cases of chopping off/uprooting olive trees, stealing crops and harvesting equipment, attacking/threatening farmers, detaining activists and farmers, preventing farmers of harvesting or entering their lands, arson attacks and the bulldozing of olive groves.

Settlers chop off scores of olive trees in Nablus

With the start of the olive season, Palestinians say Israeli settlers steal their crops in lands near settlements