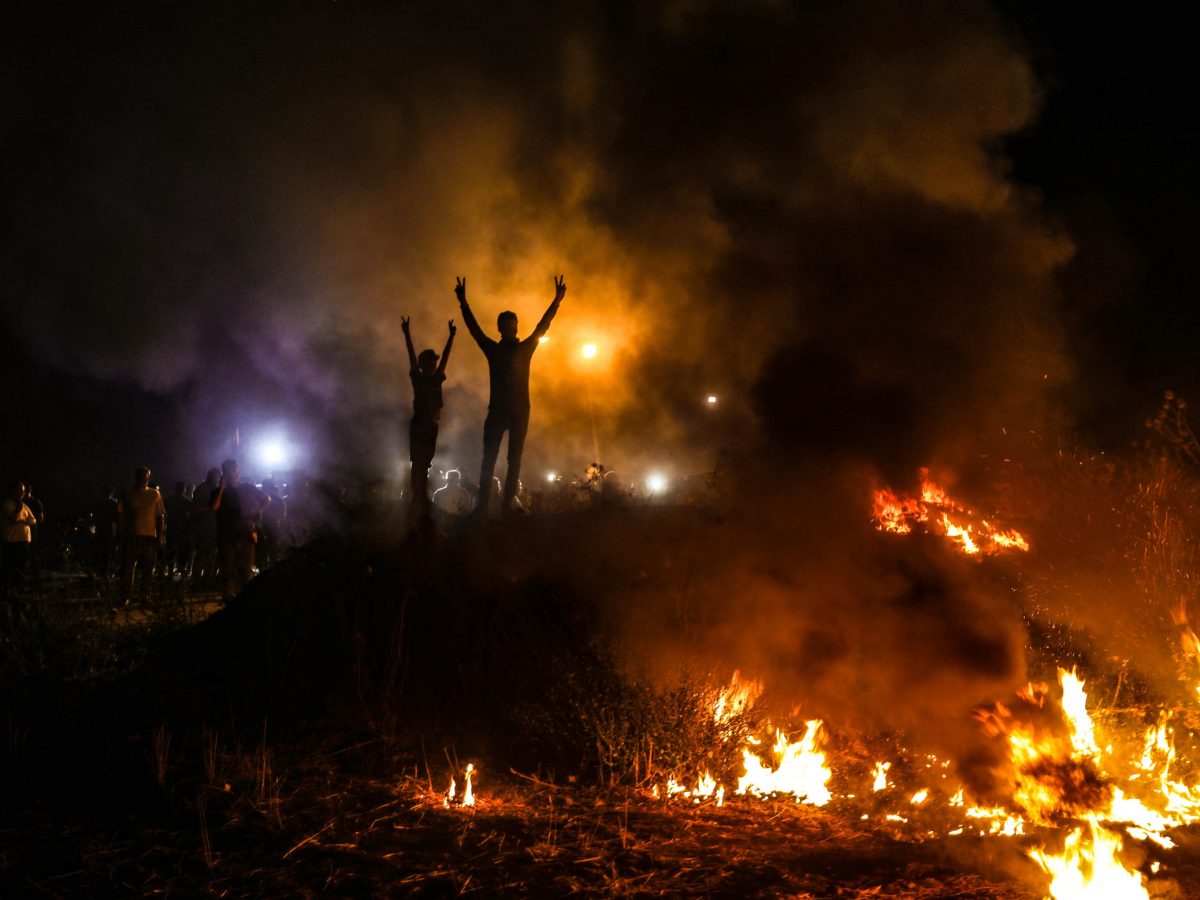 In the month of December 2021, Staat van Beleg registered 2,557 violations. (See our archive) This month we look back on the year 2021 with some hefty new records in Israeli human rights violations.

The year 2021 was a particularly turbulent year for the Palestinian population.

It was the year of excessive Israeli police brutality against praying Muslims at the al-Aqsa mosque, sparking widespread Palestinian protest and even provoking the deeply offended Hamas in the Gaza Strip to bare its teeth.
It was the year of Operation Guardian of the Walls, the name Israel gave to the devastating airstrikes on the Gaza Strip that also killed women, children and the elderly in their homes.
It was the year in which the house theft in the Sheikh Jarrah neighborhood of Jerusalem received attention in the international news and the United Nations, partly due to the efforts of the articulate Al-Kurd twins.
It was the year in which six Palestinian prisoners escaped from an Israeli prison as if it were a Hollywood movie and were hailed by the Palestinian people as heroes of the resistance.
It was also the year of rampant settler violence in the West Bank.
The year 2021 was mainly characterized by a lot, a lot of violence.

What is immediately noticeable is the enormous proportion of violent violations. In 2020 there were ‘only’ 1420, an already non-negligible number, but in 2021 Staat van Beleg registered no fewer than 30,285.
That is 66% of the total number of violations. It should be noted that a (small) part of the difference from 2020 has to do with the fact that several Palestinian news outlets have provided more detailed numbers of victims of Israeli violence. The main difference, however, lies in the sheer magnitude of the Palestinian protests that have taken place and the disproportionate violence by Israeli police and soldiers to quell these protests using live ammunition, rubber (steel) bullets, grenades and tear gas.

Attacks on fishermen and fishing boats off the coast of the Gaza Strip were a recurring phenomenon in 2021, with 77 incidents of violence.

Raids and kidnappings still the order of the day

We also saw a huge increase in Israeli raids and kidnappings. In 2020 there were already 4404, in 2021 the occupation state considerably upped its game with no less than 9268 cases. An average of 26 incidents per day. In 8,000 of these cases, it concerned individual ‘arrests’, in which Palestinians were often arrested and detained for no apparent reason. Among them were 1,300 children.

An increase of violations can also be seen in the ‘restrictions’ category. Staat van Beleg documented 1,663 of these in 2021. These types of violations include restrictions on freedom of movement, blocking the marketing of, for example, agricultural products, closing off entrances and exits to Palestinian villages, confiscating Palestinian property, stopping Palestinian ambulances, cutting off electricity and water and so on.

Staat van Beleg registered 1,780 incidents in the ‘annexation, demolition and construction’ category. There were 1,208 cases in 2020, so here too we see a large increase.

The situation of Palestinian prisoners in Israeli prisons received more attention in 2021, though this was mainly due to the aforementioned escape of six Palestinian detainees. That attention remains much needed, because after a downward trend since 2016 in the number of violations against Palestinian prisoners, we see a threefold increase in 2021 compared to 2020. Staat van Beleg documented 1014.

Administrative detention, i.e. detention without charge or trial, continues to be part of the daily routine. In addition, detainees are exposed to (medical) neglect, poor food, unsanitary cells, insufficient protection against the cold, solitary confinement, violence and torture, collective punishment and unreasonable restrictions. Several Palestinian prisoners went on hunger strike, some even to the edge of death.

Violations against Palestinian prisoners since 2016

A disturbing increase from previous years is the number of incidents of settler violence. In 2020, the Staat van Beleg registered 767 cases of settler violence and in 2021 no less than 1493, just short of doubling. The Israeli occupying state bears just as much – if not more – blame for this as the settlers themselves because of its policy of encouragement. Settler violence against Palestinians serves as an important informal tool of the state to take over more and more land in the West Bank. The state fully supports and assists these acts of violence and its agents sometimes participate directly in them. As such, settler violence is a form of government policy aided and assisted by official state authorities with their active participation.

“Settlers attack my goats and beat them in the stomach, head and legs. They always try to provoke my family and me and if any of us say anything the settlers just call the military and tell them we attacked them.”

Examples of settler violence are; physically assaulting, destroying or setting fire to olive groves, cars, and agricultural vehicles, smashing windows, breaking into homes and destroying property, hitting or killing Palestinian pedestrians by car, and outright murder. Animals and Palestinian children were also not spared from violence, for example, even a 3-year-old toddler was thrown a stone against his head and ended up in hospital.

Settler violations in the last 6 years

At least 356 Palestinians were killed in 2021. Among them were 80 children. Most of the casualties fell during the 11-day Israeli airstrikes on the Gaza Strip.

Human rights organization B’Tselem carefully investigated who 232 of these victims were and how they met their tragic end. Other organizations spoke of 254 victims, but since B’Tselem in 22 cases could not state with certainty that they were direct victims of the Israeli airstrikes, Staat van Beleg has chosen not to include these victims in the count, for the time being.

Cause of death Palestinian victims

May 2021 was, of course, the deadliest month for the Palestinian population with the Israeli air strikes on the Gaza Strip, but the rest of the year was not peaceful either. Not a month has passed without Palestinian deaths.

Victims in the Gaza Strip versus the West Bank

By far the most fatalities occurred during the devastating Israeli bombing raids in May 2021. Other victims in the Gaza Strip included three Gazan fishermen whose fishing boat exploded by an Israeli projectile, a baby and an old man who were not allowed by the Israeli authorities to leave the Gaza Strip for life-saving medical treatment abroad and in six cases Palestinians were shot dead in the border area with Israel.

In the West Bank, including Jerusalem, 87 victims were shot dead by Israeli soldiers. Five cases involved other types of Israeli military violence, including two cases of tear gas poisoning. In addition, 6 Palestinians were killed by settler violence.

The remaining eight cases involved victims who were in an Israeli prison or elsewhere outside the occupied Palestinian territories.

A deadly year for children, but also for the elderly

There were deaths in every age group. The oldest victim was an 89-year-old man named Amin. He was killed in May at his home by an Israeli missile, along with his wife, children and six grandchildren.

The youngest victim was still in her mother’s womb when Israeli soldiers fired tear gas through the windows of her parents home in a village near Ramallah in the West Bank. Her pregnant mother had inhaled the toxic tear gas, causing severe health complications and bleeding. When she arrived at the hospital, her heart had already stopped. The baby girl was given the name Misk.

“We live in a very dangerous area. Tear gas canisters are scattered inside and outside the house and I can no longer collect them right away to throw them out of reach of our children.”

As many as 80 children died in 2021 as a result of Israeli violence and the effects of the occupation. More than 10% of the victims were children up to the age of 10 and in 12.4% children between the ages of 11 and 17 years.

In memory of all child victims

They will not be forgotten. May they rest in peace.