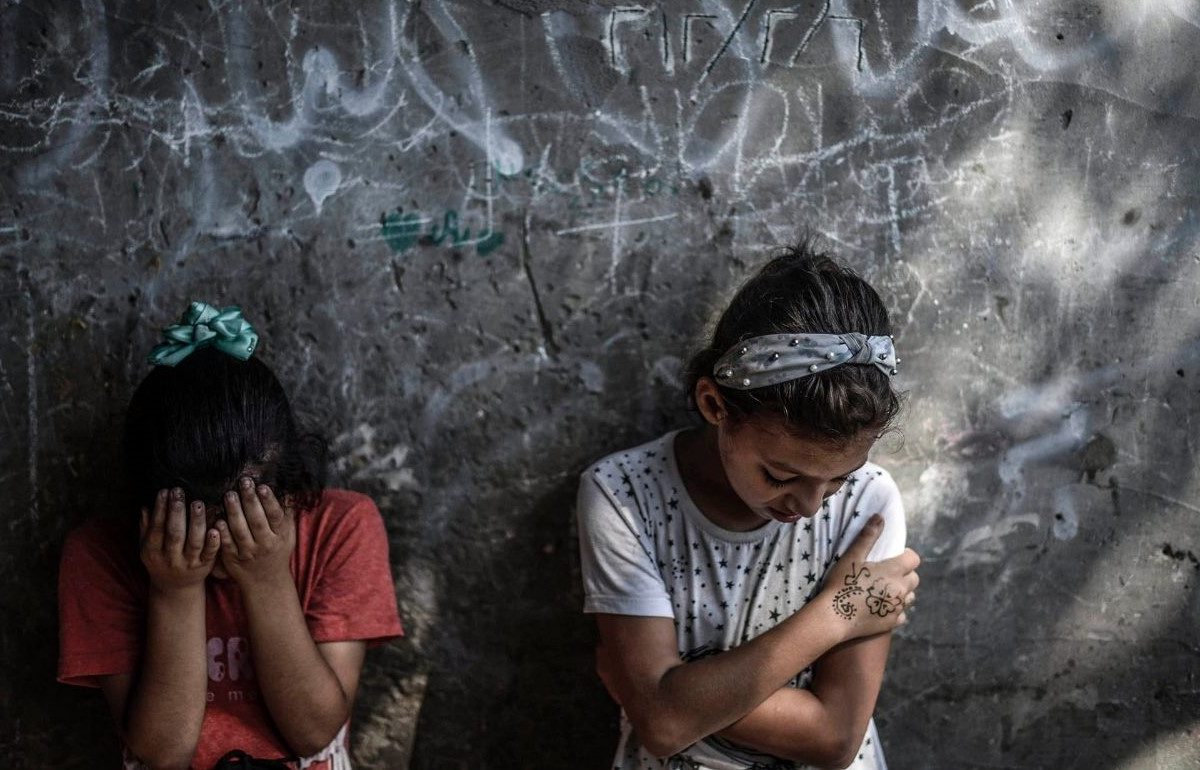 From 5 to 7 August, Israel conducted its ‘Operation Breaking Dawn’, a flattering name for devastating “pre-emptive” airstrikes against the Palestinian Islamic Jihad that killed 49 Palestinians, of which 17 belonged to innocent children. This month’s publication is dedicated to them.

May they rest in peace.

Jamil Nijm was the oldest of four siblings and was described as a social boy who used to love accompanying his father to work. He dreamed of one day becoming a doctor. His little 4-year old brother was supposed to start first grade this year. They had gone with their cousins to the cemetery to visit their grandfather’s grave when they were killed.

Their father, Ihab, had gone to the supermarket and left his kids and their cousins at home, warning them to stay inside to avoid any potential dangers, as Israeli bombs were still being dropped. Jamil and his cousins, bored from being stuck inside in the heat all day, decided to go to the cemetery where their late grandfather was buried. It wasn’t far from home and was the only open and safe place for the kids to play and spend time outside. Ihab: “When the bomb fell, my wife started screaming, not knowing yet what had happened or where the bomb had dropped. I immediately rushed to the place where my family and neighbors had gathered, looking for my son. I recognized part of his t-shirt, and instantly knew that he had been there. Our sons were targeted in front of our eyes, and we collected their parts with our own hands”.

Alaa, the oldest of her four siblings, had just finished kindergarten, and was excited about starting first grade at the end of the month. She had already prepared her school bag, pencils, and notebooks. On Friday afternoon, Alaa was with her father, on her way to her grandparents house, when the airstrike targeted her father and a family relative, Yousif.

Layan was a smart and beautiful girl, and one of a family of eight. Her father described her as ambitious and funny, and said she had a “bright future in her eyes.” Layan and her family were on their way to the beach when an airstrike targeted a nearby PIJ site in Khan Younis.  Layan was critically injured in her head, and suffered severe brain damage. She was transferred to a hospital in Jerusalem for treatment but passed away one week later.

“The bomb turned everything black. For more than 10 minutes no one could move. After the smoke disappeared, I found Mo’men laying down on his face on the ground. He had died immediately due to shrapnel in his neck,” Muhammad recounted, adding that he saw an injured Ahmad lying a few meters away from them. “I was screaming unconsciously, holding my bleeding sons in my arms, trying to get him to a hospital. I ran for a whole kilometer before I found a car carrying many of the injured to a hospital,” Muhammad said. He put his sons in the car, and jumped in another vehicle to go to the hospital. When he arrived, he found Ahmad and Mo’men, but they were covered in white cloth, and laid out among the dead.

Hanin was the eldest of two daughters in her family of five. She was an excellent student and loved going to school. She was wearing her best clothes and her mom even let her put on a little bit of makeup to celebrate her uncle’s wedding day, when the Israeli airstrike hit them. Hanin was hospitalized for four days after sustaining critical wounds to her leg and back. She succumbed to her wounds on August 9.

“Everything beautiful in my life is gone,” her father Waleed said. “When they told me she passed away, I died too.”

Hazem was an active boy in his neighborhood and was beloved by his family, friends, and neighbors, who always opened their homes to him. He was considered a son of all the families in the camp. He was sitting in the street with some of his friends when the bomb hit the street. All of his friends were injured, but survived.

Ahmad was the youngest boy among his siblings, and was described as being wise beyond his years.

“I always saw him as a little man, he was like a friend,” brother Bilal said, adding that Ahmad was always defending his older brother Muhammad when he was in trouble. “Even though he was the youngest, he was tougher and braver than all the other brothers.”

Muhammad had big dreams of becoming a traveling merchant, to go outside of Gaza and bring back new exciting things to trade. He always talked about growing up so he could work and achieve his dreams. In the summers he would make kites and sell them to kids in the neighborhood.

“He had a kind, soft heart,” his older brother Bilal said.

Dalia had dreams of becoming a doctor and the family used to call her “the doctor of the family” to encourage and support her to follow her dreams.

Her brother Bilal said she was an excellent student and loved painting. She also used to help her mother around the house while her other sisters were busy studying. “She loved her family and never complained,”

Muhammad was beloved in the neighborhood and among his peers. During the bombing he was seeking shelter with his family in their home in Rafah, which was in the apartment complex next to a home that was targeted in the airstrike. The house was hit without prior notice.

His family of six were all injured in the strike. His father Iyad has undergone 14 surgeries to remove shrapnel from his body, and has had two of his toes amputated.

Hamed set off with his cousins to the cemetery, as they often did to try and get some fresh air, with no consideration that they might get killed. After all, the cemetery was supposed to be a safe place. Hamed was one of six family members, and was supposed to start tawjihi, his secondary school final exams, in the upcoming school year.

Nazmi was a friend and neighbor of the Nijm boys, and often joined them at the cemetery. He was one of a family of 11, and was a promising football player. Ismael, his 23-year old brother said that their last conversation together had been foreboding, as the boys discussed what would happen to them if they were killed. One of the boys, Muhammad Salah Nijm, said he had a feeling he would die as a martyr. Another one of the boys, his friend Hamed, told him: “if you die, I will die too, we should be together.” Nazmi had also replied: “you will go and leave me alone? If we’re going to die, I’m going with you.”

The Israeli airstrike killed them all.

Ahmad was the eldest son of a family of seven. He was killed in the Jabalia refugee camp alongside six other people while they were in the streets. His father works in Israel and was stuck in Israel due to closed checkpoints when his son was killed. Ahmad was buried before his father could return to Gaza.

“It is really painful that I could not see him before he was buried,” his father said.

Muhammad was excited about starting his final year of high school in the next month, along with his cousin Hamed. His family of seven described him as an excellent young man with great manners, who was loved by everyone in his neighborhood. He had gone to the cemetery with his cousins to escape the heat after the power cut when the airstrike hit them.

Fatima was a member of a poor family of ten. Father Ayed described her as a smart girl who loved school. She was playing outside of the family’s home in Beit Hanoun with her younger sister Rahma, 11, when an Israeli airstrike hit them. Fatima died instantly, and Rahma was critically injured.

“Rahma cries and screams every day asking about her sister. She says her sister isn’t dead, and she waits for her to come back home,” Ayed said.

Even though Khalil was technically not a child anymore, we add him to this list as the 18th victim.

Khalil was his parents’ only child, who struggled for 13 years with IVF treatments in order to conceive. When they finally had him, it was like a dream come true. His grieving mother Najwa said: “He was the only one who calls me mom, and now he’s gone, I will never hear that word again.”