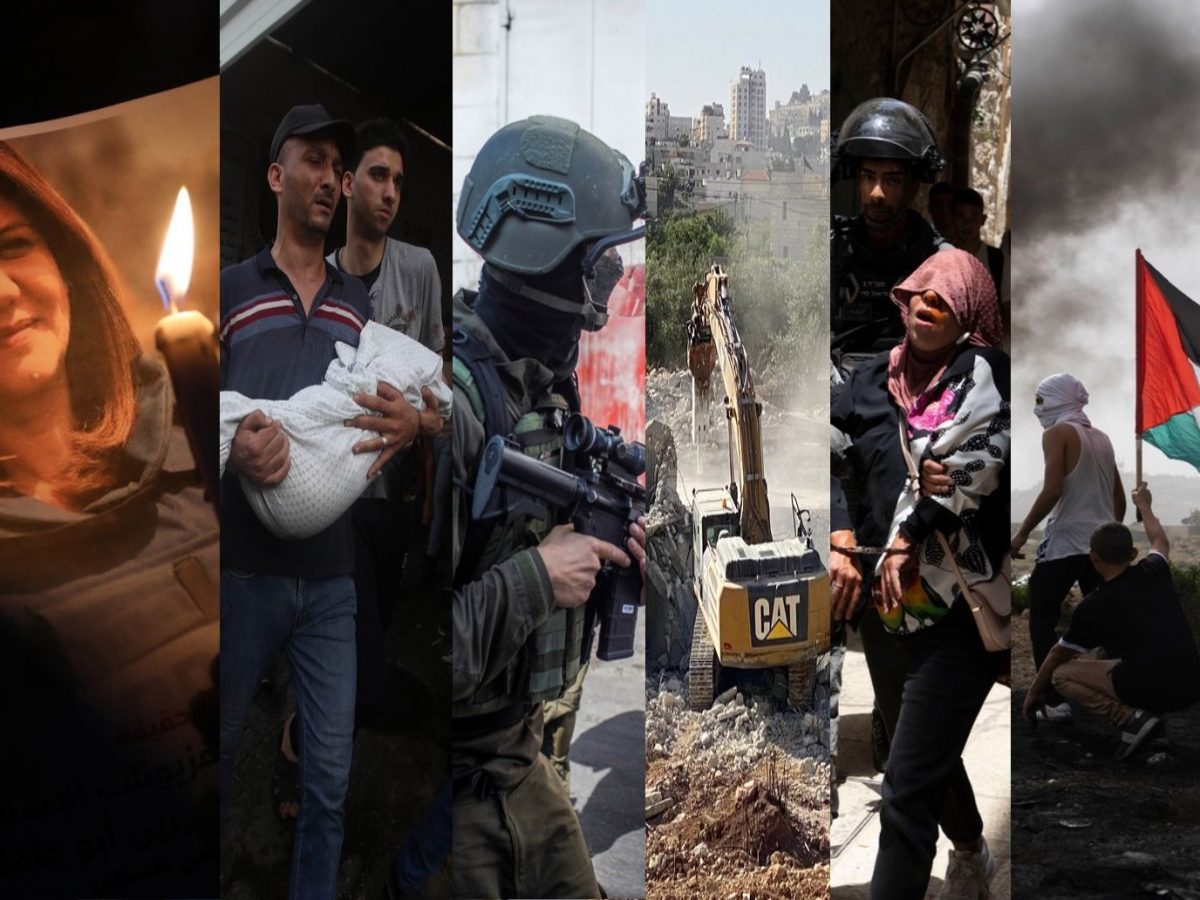 It was the year in which Al Jazeera journalist Shireen Abu Aqleh was killed by Israeli soldiers. The one murder that got worldwide attention and was covered by all the mainstream media outlets everywhere. One would think that a murder like that is a rare occurrence.

Shireen was one of 165 Palestinians who were shot dead in 2022. That’s about one murder every other day. All of them committed by enforcers of the Israeli occupation.

But this is not all. The total number of Palestinians killed was 266.

In August Israel launched yet another deadly offensive on the Gaza Strip which resulted in 56 casualties due to airstrikes, many of them children.

The Israeli occupation doesn’t discriminate, though. The eldest victim was 80 years old. He was beaten to death.

Another 13 Palestinians were killed by other forms of Israeli violence, such as the 57-year old male who died from inhaling tear gas and the 32-year old worker who was on his way to work when he was beaten to death by occupation forces.

The statistics presented demonstrate that Israel’s approach to using lethal force in the Occupied Territories has become increasingly dangerous over the past year. Every Palestinian is considered a potential threat and any perceived danger to Israeli forces is met with deadly gunfire. These instances are not isolated incidents, but rather a fundamental aspect of the Israeli apartheid regime’s strategy, which utilizes violence to uphold its central belief in Jewish superiority. To further this agenda, those responsible for these killings, including the shooters, their superiors, and those who authorize and shape the open-fire policy, are not held accountable.

The big numbers; the violations that didn’t kill.

In 2022 we saw an incredibly high number of all kinds of Israeli violations against the Palestinian people. In total 35.174. Even though the year 2021 saw more violations in total, this was due to the Israeli offensive on the Gaza Strip in May 2021 that accounted for 58,5% of all violations. The year 2022 saw a sharp rise in demolitions, settler violence and prison violations.

Israeli occupation forces demolished 1,084 Palestinian homes and structures and confiscated more than 113 square kilometres of land in 2022 in an effort to expand illegal Jewish-only settlements in the occupied West Bank and East Jerusalem. 1,294 Palestinian people were displaced as a result.

In May, Israel’s high court ruled the government could proceed with its long-planned expulsion of more than 1,000 Palestinians, including 500 children, from the Masafer Yatta region of the occupied West Bank under the pretext of establishing a military training zone. Shortly afterwards, Israeli soldiers began forcing Palestinians out of their homes and destroying their communities.

For the third year in a row, settler violations have increased sharply, making 2022 a record year.

At least 838 violent attacks were carried out by Israeli settlers against Palestinians in the occupied West Bank causing death, injury and/or significant property damage, an increase of almost 88% over 2021. Often Israeli soldiers protected settlers while they attacked Palestinians and their property, sometimes joining in the assault and/or detaining the Palestinian victims instead of the settler perpetrators.

UN OCHA special rapporteurs stated in December: “Armed and masked Israeli settlers are attacking Palestinians in their homes, attacking children on their way to school, destroying property and burning olive groves, and terrorizing entire communities with complete impunity. Disturbing evidence of Israeli forces frequently facilitating, supporting, and participating in settler attacks makes it difficult to discern between Israeli settler and state violence. The impunity of one is reinforced by the impunity of the other.”

At least 835 Palestinians were imprisoned without charge or trial by Israel using a practice called “administrative detention,” which has been condemned as fundamentally unjust by human rights organizations and the UN.

Other prison violations include violence and torture, the use of unjust sanctions and collective punishment, the restriction of access to warm clothes and sanitary products, the blocking of family visits and medical negligence.

Even with Israel’s entire system of dominance thoroughly documented and made public via international human rights organisations, Israel has continued to benefit from impunity caused by the international community’s silence throughout its ongoing aggression against every aspect of Palestinian existence and resistance under its decades-long occupation.

With 12,250 violations, cases of violence and destruction made up for 34,8% of the year total.

The bulk of the violations consists of the use of live ammunition, rubber bullets and teargas on Palestinian protesters and during raids into Palestinian communities and villages. According to the Palestinian Ministry of Health, 9,000 injuries were reported as a result of these raids.

Other violations are the destruction and damaging of property during random home searches and the use of violence on Palestinians before, during and after their arrest. Israeli forces have also torched or ravaged 18,900 (olive)trees in 2022.

Overnight raids by the Israeli army are a daily practice in the occupied West Bank. Israel claims that they are essential for “intelligence purposes”, however rights groups have slammed the practice, insisting that the goal is to oppress and intimidate the Palestinian population and increase state control.

More than 3,000 Palestinians have been arrested by Israeli occupation forces in 2022, as part of what the occupation has dubbed operation “Breaking Waves”.

It should be clear that 2022 was a very difficult year for Palestinians and their supporters. Let’s hope that 2023 brings us one step closer to a free Palestine. Although the road to peace may still be long and difficult, we will continue to work towards a future in which Palestinians can exercise their right to self-determination and live in peace.