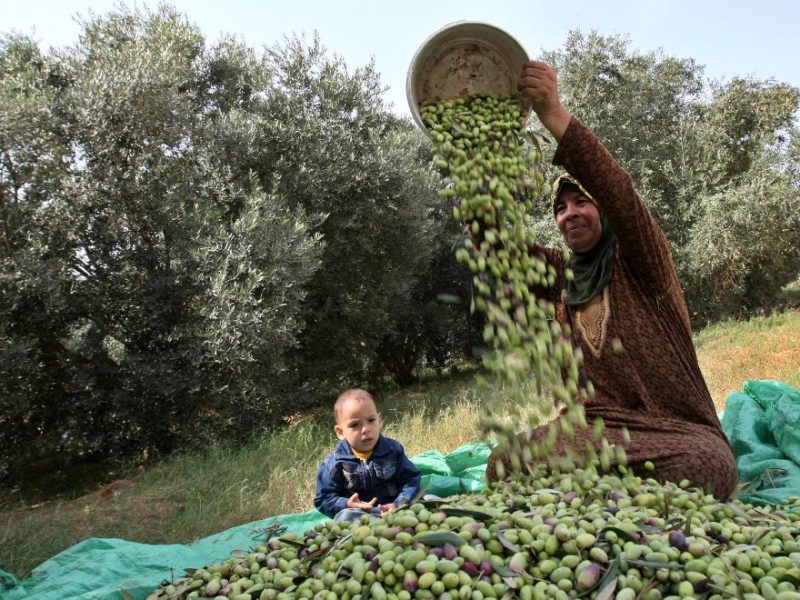 A selection of articles

2 November 2021, by The Electronic Intifada

The olive harvest in Gaza is normally a time of celebration. The crop is not just a staple of Palestinian cooking, it is a source of income for many families and farmers. So the harvest is an occasion for relatives to work together. This year, however, like last, the yield is set to be exceptionally low. So low, in fact, that farmers in Gaza expect the harvest season, which normally lasts through fall to December, to come to an end within the next few weeks. Experts say climate change causing warmer winter temperatures is to blame for what Gaza’s ministry of agriculture projects to be a 65 percent reduction in yield compared to previous years.

Olive trees have long been associated with Palestine and are considered a symbol of Palestinian heritage and identity. The olives are sold as food and used to make olive oil, soap and comsetics, among other things.The olive harvest season, which runs between October and November, is one of the most important periods of the year for villagers and farmers in parts of the occupied West Bank and Gaza. Many rely on the olive harvest as their main source of income.However, these harvests have dwindled in recent years, not only as a result of the uprooting of trees by Israeli settlers, but from the harsh climate and extreme temperatures, which makes it harder for the trees to grow and bear fruit.

Climate Change, the Occupation, and a Vulnerable Palestine

Climate change is among the greatest threats facing humanity. Its effects are global, wide-ranging, and distributed in a highly unequal manner. Although Palestinians and Israelis inhabit the same physical terrain, Palestinians under occupation will suffer the effects of climate change more severely. The ongoing Israeli occupation – now in its fifty-second year – prevents Palestinians from accessing resources and pursuing measures to support climate change adaptation.

Bedouin children in the West Bank joined global climate protests yesterday, calling out the Israeli occupation’s role in exacerbating the effects of climate change on Palestinians. Over a dozen protesters from the Bedouin village of Umm al-Khair in the South Hebron Hills, waved placards reading “live with the land, live like Bedouins,” in Palestine’s first Extinction Rebellion action. Although Israel and Palestine both face rising temperatures and less rainfall as a result of climate change, Palestinians are likely to suffer the effects more severely. This is largely because Israel restricts their water access, with less than 15% of water from the region’s three main aquifers allocated to Palestinians. The rest supplies Israel and illegal Israeli settlements in the West Bank.

Palestine is a climate justice issue

The livelihoods of Palestinian agricultural communities have been transformed by the combination of seizure of land and water, and climatic shifts. Palestinian farmers face some of their most severe problems in the Jordan Valley, an agricultural area that comprises 30 percent of the West Bank.

“Technology developed in the context of the occupation is used by Israel’s seemingly benign precision agriculture industry. This civilian application allows Israeli military companies to promote “a sanitized version of their repressive technologies” as tools to combat climate change and world hunger. Israeli agritech companies “develop and market smart irrigation systems, crop protection solutions and specialty fertilizers to farmers across the world, raking in billions of dollars in annual sales, while enjoying a positive ‘green’ image.” Who Profits states.

In a report by Arava Institute for Environmental Studies, experts said that Israel’s plan to annex 30 per cent of the occupied West Bank could exacerbate the damaging effects of climate change, including threatening the region’s strategic water supplies, endangering the food security of Palestinians and bring an end to essential cross-border environmental collaboration.The report warned Israeli politicians to think about their actions. It said: “Climate change is a cross-border global issue with serious natural resource and environmental justice implications.”

More than a century of colonizing the land has led not only to the erasure of rare ecological areas like Hula Lake in the north or the Dead Sea, but also to the conquering of an entire country from the Mediterranean Sea to the Jordan River. It has meant erasing an entire people from the landscape by expelling indigenous communities, expropriating their land, Judaizing the Negev/Naqab and the Galilee, and establishing hundreds of Jewish-only communities, settlements, and outposts across the country.

In 2018, Israeli researchers published one of the first dedicated reports on climate change in the region, which forecast a 2.5-degree increase in average temperatures alongside a decrease in precipitation of up to 40℅ in the most arid regions.[iii] These results paint a picture of increased desertification, wildfires, drought, food and water scarcity, and unbearable temperatures. Increased flooding would also be triggered in mountainous watershed areas such as Marj Sanour, endangering food supplies and liveable areas even further. This situation is exacerbated by the fragmented and volatile political situation in the region.

Seeds of resistance: The woman fighting occupation with agriculture

“I speak about the occupation within a global context because it does not exist in isolation from global trends,” Vivien Sansour tells me. “Farmers who can produce their own food and make their own seeds represent a threat to any hegemonic power that wants to control a population. If we are autonomous, we really have a lot more space to revel, to create our own systems, to be more subversive.”

‘If you’re for justice for Palestinians, you’re for climate justice’: Zena Agha on climate change and the future of Palestine

The two main effects or risks posed by climate change in Palestine are increased temperatures and precipitation changes – rainfall. It’ll be warmer, and temperatures have already increased on average by 1.5 degrees in the area of the Mediterranean Sea. The ClimaSouth Project predicts that temperatures will continue to increase between 2.2 to 5.1 degrees Celsius which is higher than the global average. This will of course have a cataclysmic effect on the region, particularly with regards to accelerating desertification.

Palestine: ‘Climate change is not just a natural phenomenon but a political one.’

Our work also includes devising campaigns to confront controversial projects in which European countries are involved with Israel, with total disregard for the Israeli occupation and its practices, allowing for its normalization. One such campaign is against the underwater power cable known as the EuroAsia Interconnector, a project between Israel, Cyprus and Greece aimed at connecting the national grids of these countries. We participate in lobby tours in Europe to highlight how such endeavours are not only are detrimental for the environment, but also make European governments complicit in Israeli human rights violations and Israel’s occupation of Palestinian land and resources.

From heat waves to ‘eco-apartheid’: Climate change in Israel-Palestine

Polling among Israelis shows a great deal of indifference to the coming crisis, which means the Israeli government is facing little popular pressure on the issue. No equivalent research has been done in the occupied Palestinian territories but the ongoing occupation of the West Bank and siege on Gaza at once compound the risk of climate catastrophe for Palestinians, and make it virtually impossible for their government to do anything about it. Late last year, a group of Israeli researchers published the first detailed forecast of what climate change could mean for Israel-Palestine. The results were frightening: relative to the benchmark period of 1981–2010, the 30-year period beginning in 2041 is expected to see average temperatures rise up to 2.5 degrees Celsius, and a drop in precipitation of up to 40 percent in non-arid parts of the country.